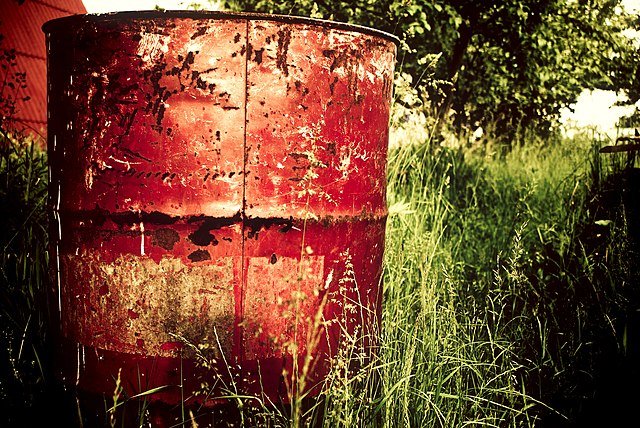 Another little incident to be filed under “Daily Debacles.”

For years, I would almost never buy any article of clothing, piece of furniture, book, or plant that was new. I scavenged the streets of LA, shopped at Goodwill, even foraged for food. Not from Dumpsters—even I wouldn’t go that far—but produce from the sidewalk, for example, was absolutely fair game.

I’ve made a lot of progress in this area but old habits die hard. Blame a set of Depression-era parents, one whose own parents came over on the boat from Ireland, a working-class father with eight kids, and the very real fact that a self-employed “creative writer”—who’s Catholic no less—is not in this culture poised to become a “high earner.”

Anyway, so just before the holidays I realized that for six years my kitchen trashcan has been too small. Round, aluminum—I think the thing was actually meant for the bathroom. When I bought it (new!), from The Container Store, I was setting up shop in my then-new apartment in Pasadena and was no doubt cowed by the initial outlay and trying to economize.

Supposedly I could step on a little lever and the cover would open but that feature had gone by the wayside long ago. I didn’t so much mind that as the fact that any trash bag of sufficient heftiness was about three times too big so the edges were always hanging over. Also I was always kind of missing or slopping over the fairly small opening so was constantly wiping up around. Et cetera.

With my newly-expanded consciousness, however, last week I realized out of the blue, Hey, I could buy a NEW trash can. A bigger trash can. A trash can that is actually meant for a kitchen!

So I shopped around and got a very nice number from Simple Home or Basic Brain or some outfit like that. It’s the right, convenient size, the garbage bag fits, the lever works—my life has been transformed!

Still, there was the matter of the old trash can, which technically still had quite a bit of life in it.

In LA, you just put any old thing you don’t want on the sidewalk and within minutes it’s been whisked away by some lucky scavenger. The neighborhood I live in here in Tucson isn’t exactly hoity-toity, but people just don’t seem to leave things out and the owner, who lives in back, I thought might frown on such a practice.

I thought to move it to the bathroom where it belongs but it was too big to fit in between the toilet and sink.

I keep a running Goodwill pile—but would even Goodwill want a used kitchen trash can? Probably not—so with some misgiving, I decided to put my old item out with the garbage. The yardman, however, had just pruned the mesquite trees and filled the bin to the brim. So I left my little dented silver aluminum can to the side, meaning to put in the bin come Monday, after the weekly garbage truck came.

Seeing it out there a few times during the week, though—I just couldn’t do it. Well? I waffled. Paul, the handyman, was coming Thursday to install a couple of door sweeps. He’d mentioned that he lived in an apartment complex and that he was friends with the manger…maybe someone over there could use it.

So I hauled it back to the yard, got out my ammonia and scrub brush, and gave the thing a thorough cleaning. It was pretty clean to begin with, but I even took an old toothbrush to the tricky part where the top hinges on. It really looked pretty darn good.

I kept thinking of a book by Ryszard Kapuscinski called Empire of the Sun about sub-Saharan Africa. He had a passage about how people would own one thing, literally one thing. Like one guy would have a shirt, another a pickaxe. And they’d pool resources if someone, say, got a job. Why, the right person would be glad to have my trash bin!

To me, the offer of anything free gives rise to a massive endorphin rush. So offering a free item, especially one I’d put a little thought and work into, to someone else….Gosh! —would Paul even think I was flirting! I felt a teeny bit giddy when he knocked at the door, tools in tow.

We walked around the house a bit to re-establish which two doors needed a sweep (he’d been over the week before to case things out). And then, gesturing to my little offering with a mixture of shyness and pride, I said, “Hey could you by chance use a kitchen bin? It’s in pretty good shape!”

No sooner were the words out of my mouth than I realized I was offering the poor guy my old trash can. He looked at me, looked at the trashcan, and looked back again. “Unh, that’s okay,” he replied evenly. “I’m pretty set right now for wastebaskets.”

I cringed back to my office lair, pulsing with shame while he worked. He was finished in half an hour. I thanked him profusely.

And after he left, there was the shined-up old trash bin, still sitting in the corner of the hallway. I just couldn’t bring myself to throw it out. This morning I took it down cellar and gave it a little pat.

Goodwill, for sure. They can do with it what they want.

10 Replies to “WASTEBASKET NOT, WANT NOT”