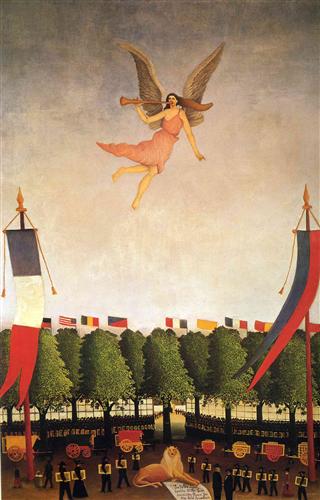 LIBERTY INVITING ARTISTS TO TAKE PART IN THE 22ND EXHIBITION OF THE SOCIETY OF INDEPENDENT ARTISTS, HENRI ROUSSEAU, 1905-1906

“Since the world began, its history is nothing but the account of the campaign waged by the powers of the world and the princes of hell against the humble souls who love God. It is a conflict in which all the odds seem to favor pride, yet humility always wins…

The war which broke out in heaven between St. Michael and Lucifer is still being fought…Every wicked man since Cain, up until those who now consume the world, have outwardly appeared to be great and powerful princes. They have astonished the world and men have bowed down before them. But the face they present to the world is false…

All ancient history, both sacred and profane, is only the record of this conflict. The order established by God has always conquered, and those who have fought with him enjoy eternal happiness….If one solitary soul has all the powers of hell and the world against it, it need fear nothing if it has abandoned itself to the order of God.”

I thought of that passage as I read The Free World: Art and Thought in the Cold War, a newly-published 727-page tome by public intellectual and cultural critic Louis Menand.

4 Replies to “THE FREE WORLD”