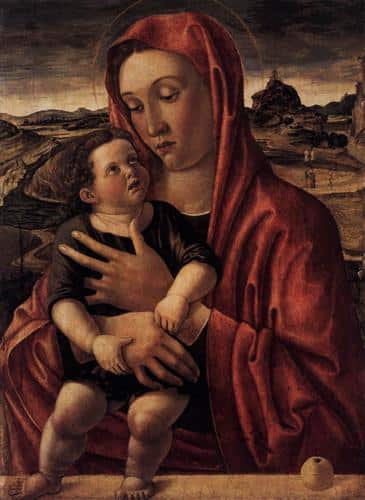 MADONNA, WITH CHILD STANDING ON A PARAPET, GIOVANNI BELLINI, 1469

“Advent is the time for rousing. Man is shaken to the very depths, so that he may wake up to the truth of himself. The primary condition for a fruitful and rewarding Advent is renunciation, surrender. Man must let go of all his mistaken dreams, his conceited poses and arrogant gestures, all the pretenses with which he hopes to deceive himself and others. If he fails to do so this stark reality may take hold of him and rouse him forcibly in a way that will entail both anxiety and suffering.

The kind of awakening that literally shocks man’s whole being is part and parcel of the Advent idea. A deep emotional experience like this is necessary to kindle the inner light which confirms the blessing and the promise of the Lord. A shattering awakening; that is the necessary preliminary. Life only begins when the whole framework is shaken. There can be no proper preparation without this. It is precisely in the shock of rousing while he is still deep in the helpless, subconscious state, in the pitiable weakness of that borderland between sleep and waking, that man finds the golden thread which binds earth to heaven and gives the benighted soul some inkling of the fullness it is capable of realizing and is called upon to realize.”

When I first started attending Mass as a convert, I frequently walked up to St. Basil’s on Wilshire Boulevard in Koreatown, LA, at noon.

This is where I learned the Angelus, which we also prayed just before Mass began.

“The angel of the Lord declared unto Mary”…How beautiful, in the middle of a crowded city, in the middle of the day. There we were in the cavernous sanctuary. One of the sisters—not religious sisters, but blood sisters, who assisted with Mass–would lead us. They were both about 90 and spry with perfectly coiffed white hair and neatly pressed, old-lady skirts and cardigans. They lived together down the street, also walked, and per my friend Fr. Terry, who was a priest at St. Basil’s, had been coming forever.

At those noon Masses in the mid-90s, the age-old rituals of the Church began to seep into my body, blood and consciousness. That daily walk to the Church, the people and apartment buildings and hibiscus bushes that I passed. My sorrows and conflicts and worries and troubles that I’d think about en route.

Inside, the blessed hush, the cool, the holy water font, the Sign of the Cross.

The light filtered by the narrow stained glass windows set high in the wall. The cherrywood pews. The ragtag group—homeless people; businesspeople; people, mostly old, from the neighborhood. Young people, too–all ages–and a variety of races. The relief as I decided where to sit: Here, I don’t have to give an account of myself. The genuflection before taking my pew. The finding of that day’s antiphons and responsorial psalm in the back of the Breaking Bread missal/hymnal.

A moment of quiet as we gathered ourselves: waiting, watching, longing, hoping.

“The angel of the Lord declared unto Mary”….

After the Angelus, whichever of the old ladies who had led would say another prayer that over time, I came to memorize. “Oh Jesus, through the immaculate heart of Mary, I offer you my prayers, works, joys and sufferings of this day, in union with the holy sacrifice of the Mass throughout the world. I offer them for the intentions of your Sacred Heart”….

That, too, became part of the rhythm of my walking, my days, my nervous system.

Recently, I’ve taken during morning prayer to selecting a specific person in whose name to offer up those “prayers, works, joys and sufferings of this day.” I almost always instantly know who: often, someone I’ve thought ill of, judged, or felt hurt or slighted by the day before.  It’s really a lovely practice. It leads me away from pretending that such “small” judgments, resentments, don’t matter: they do. I usually have a part in creating them, if nothing else by putting myself in a position where I knew, or should have known, I could be hurt. Sometimes I’ve had a part in perpetuating them, as in badmouthing the other person to another person who would listen, or just being incapable of letting the offense go and moving on.

Just as often, I end up dedicating my day to someone who’s in pain; groaning under the burden of an addiction, of depression, of familial and/or work responsibilities, conflicts, tragedies.

Or maybe it’s a friend for whom I’m simply incredibly grateful.

Fr. Delp wrote his meditations during Advent, in a Nazi prison. I highly recommend them as we enter this glorious, mysterious, liturgical season that reminds us the light shines in darkness, but the darkness has not overcome it.

He’d been arrested basically for following Christ, for believing in God, for being a Jesuit. He was hanged on February 2, 1945.

6 Replies to “A SHATTERING AWAKENING”