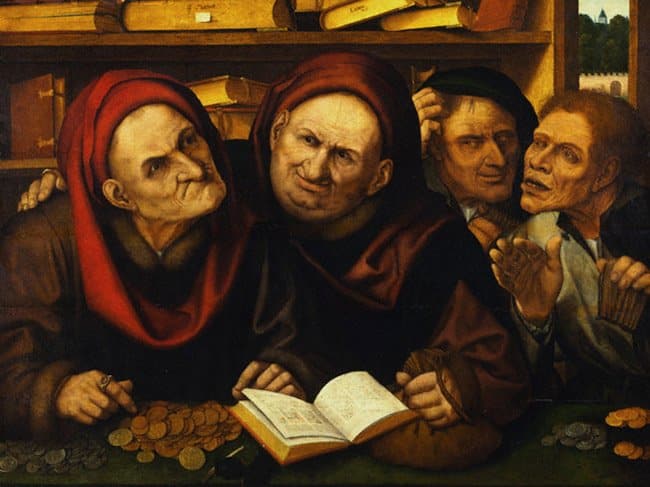 Two of the Gospel readings this week are ones that have always stymied me.

One is the parable of the unfaithul steward who gets fired for squandering his master’s goods, realizes he’s too weak to work and too proud to beg, and decides to cook the books in favor of the master’s debtors so that once he’s out on the street, they’ll welcome him into their homes.

And the master COMMENDS him, saying “For the people of this world are more shrewd in dealing with their own kind than are the people of the light.  I tell you, use worldly wealth to gain friends for yourselves, so that when it is gone, you will be welcomed into eternal dwellings.”

The second reading continues on:

“I tell you, make friends for yourselves with dishonest wealth, so that when it fails, you will be welcomed into eternal dwellings.The person who is trustworthy in very small matters is also trustworthy in great ones; and the person who is dishonest in very small matters is also dishonest in great ones. If, therefore, you are not trustworthy with dishonest wealth, who will trust you with true wealth? If you are not trustworthy with what belongs to another, who will give you what is yours? No servant can serve two masters. He will either hate one and love the other, or be devoted to one and despise the other. You cannot serve God and mammon.”

What, I’ve always wondered, is dishonest wealth short of actually, say, stealing it from someone?

So this morning I googled “What did Jesus mean by dishonest wealth?”

And right away an 11-year-old blog post came up from a Msgr. Charles Pope (who’s probably some kind of universally-known Catholic luminary) in Washington, DC.

He considers a couple of other theories, then proposes this one:

“It refers to the fact that this world is unjust, and thus, all its wealth has injustice and unrighteousness intrinsically attached. We live in a world where the distribution of wealth, resources and money are very unevenly and unjustly distributed. Now world wide economies are very complicated matters and there may be any number of reasons for this. Some areas of this planet are just more fertile than others. Other areas have more oil etc. There is often a role that corrupt governments play in unjust distribution as well. It is a true fact that we are sometimes unable to effectively help the needy in certain countries because corrupt governments and individuals divert what is intended for the poor. But there is just no getting around it, this world has a very unjust and unequal distribution of wealth and resources for any number of reasons. We, in America, live at the top of the system and we cannot wholly ignore that our inexpensive goods often are so because workers in other parts of the world earn a mere pittance to manufacture or harvest our cheap goods. Much of the convenience and comforts of our lifestyle are provided by people who earn very little for what they do, often without medical benefits, pensions and the like.

Now again, economies are very complicated and we may not be able to a great deal to suddenly change all this. But we ought to at least be aware that we live very well and many others do not, and that our high standard of living is often the result of the cheap labor elsewhere. When I buy a shirt in the air-conditioned store and take it in my air-conditioned car back to my air-conditioned house with a walk-in closet, it ought to occur to me that the person who made and packed this shirt probably doesn’t live nearly as well as I do, earned very little for the work at that I can buy the shirt for less than $20 for reasons like this.

Now I am not calling for boycotts, (they probably just hurt the poor anyway), and I am not sure exactly how we got to such inequities in this world. I know it annoys me when some people simply want to blame Americans for every ill there is. There are other factors such as international corruption, bad economic theory and the like. There’s plenty of blame to go around. But the fact is, this world is an unjust place and every bit of wealth we have is somehow tainted by that injustice…

If that is the case, then what to do? Jesus is not unclear, for he goes on to counsel that we befriend the poor with our “unrighteous mammon,” that we be generous to others who are less fortunate. We who live so well need to remember that the monetary cost of a product may not fully express it’s true human cost. If we have been blessed (and boy have we been blessed) then we are called to bless others.

A final disclaimer – The question of poverty and or worldwide economies are complicated. I do not propose simple solutions. I am not an economist, I am not a socialist, I am not a communist. I am simply a Christian trying to listen to what Jesus is teaching. I am trying to internalize his teaching that I ought not be so enamored of the wealth of this world. For, it is steeped in unrighteousness even if I don’t intend that unrighteousness. I think I hear the Lord saying, “Be on your guard with money and worldly wealth. It’s not as great as you think. In fact, if you don’t learn to be generous, it may well be your undoing.” There is a powerful scripture addressed to us who have so much. It seems to offer hope for us if we follow its plan. I would like to conclude on it:

Command those who are rich in this present world not to be arrogant nor to put their hope in wealth, which is so uncertain, but to put their hope in God, who richly provides us with everything for our enjoyment. Command them to do good, to be rich in good deeds, and to be generous and willing to share. In this way they will lay up treasure for themselves as a firm foundation for the coming age, so that they may take hold of the life that is truly life (1 Tim 6:17-19).“

“I have always had a hard time trying to understand what exactly Jesus is talking about in this passage. What’s the point? What do I do differently in my life because of what Jesus is saying here? What is he saying?

I don’t think I have found the answer to this question, but I did have this reflection recently as I read this passage about the dishonest steward: People use their intelligence, their cleverness, and their talents to do everything they can to help themselves. Most people put every ounce of effort into getting ahead or making more money. Some people use great intelligence in deceiving others and taking advantage of people. But what if we used our intelligence and effort to do everything possible to become holy and to help our neighbor? What if, instead of meditating on how to make a few more dollars, we spent our days and nights laboring to help one another? What if, instead of dreaming of riches, we dreamt of holiness? The dishonest steward used his cleverness to successfully make a way for himself after being fired. What if we used our cleverness to love one another? The dishonest steward put his talent to use to forward his cause. What if we used all of our talents to strive towards holiness and charity?”

I always feel True North when pointed back to the fact that Christ’s kingdom is not of this world. It seems that the realization would lead to hopelessness, but in fact it leads to the fact that I’m invited to bear, along with Christ. the tension of the Cross. The fact that all wealth is in a sense dishonest is to me on a par with the fact that all government is also in a sense dishonest. That doesn’t mean we try to live without money, nor that we don’t do our part, by our own best lights, to be “good citizens.” But render unto Caesar what is Caesar and render unto God what is God’s. And accept that we’re never going to bring the Kingdom in being through politics or wealth, or even the redistribution of wealth, alone.

There’s a humility built in to this way of thinking. A humility that guards against ideology, self-rightneousness, finger-pointing, virtue-signaling, and the effort to “cleanse” in the creepy Nathaniel Hawthorne Scarlet Letter, “The Birthmark” way. We can try to cleanse all we want, but the poor we will always have with us. Including us.

Not cleansing–rather purity of heart. Also: money is for building relationships. Even the dishonest manager knew that. Money is to spread love.

The pinnacle of which comes into today’s reading: the Parable of the Widow who gave her last two mites.

6 Replies to “HONEST AND DISHONEST WEALTH”