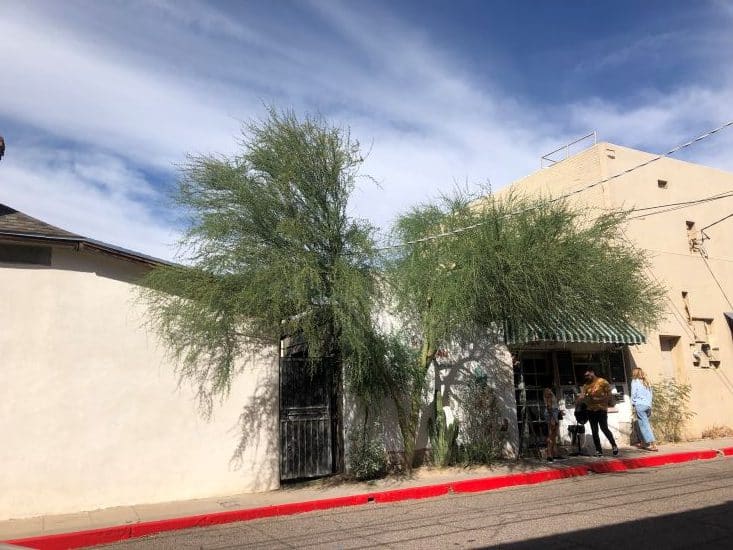 As Jesus was leaving Jericho with his disciples and a sizable crowd,
Bartimaeus, a blind man, the son of Timaeus,
sat by the roadside begging.
On hearing that it was Jesus of Nazareth,
he began to cry out and say,
“Jesus, son of David, have pity on me.”
And many rebuked him, telling him to be silent.
But he kept calling out all the more,
“Son of David, have pity on me.”
Jesus stopped and said, “Call him.”
So they called the blind man, saying to him,
“Take courage; get up, Jesus is calling you.”
He threw aside his cloak, sprang up, and came to Jesus.
Jesus said to him in reply, “What do you want me to do for you?”
The blind man replied to him, “Master, I want to see.”
Jesus told him, “Go your way; your faith has saved you.”
Immediately he received his sight
and followed him on the way.
—Mark 10:46-52

I heard something new in this morning’s homily: the priest called our attention to the phrase “He threw aside his cloak.” In Jesus’ time, apparently a person’s cloak was sleeping bag, overcoat, umbrealla, sunshade, and a bunch of other things–so for the blind man to throw his aside his cloak would be akin (my gloss) to us chucking our iphone into the crowd and “springing up” to meet the Master.

Do I want to see? Myself clearly, for example…I’ve been asking for that lately. And as they say, Be careful what you ask for!

Now that the temperature has turned cooler, I’ve been leaving my desk and venturing out to explore my new city a bit. Fun! My knee’s still not healed enough to walk any distance (I learned this the hard way a couple of days ago), but I’ve checked out a few vintage furniture shops, stood in line at Barrio Bread, eaten at Tumerico’s, trolled the aisles at Bookman’s, had a new left rear sensor installed at Discount Tires, established a deep intimacy with the entire staff at my new dentist’s office, ducked into Johnny Gibson’s Grocery, and most recently visited the Tucson Museum of Art.

En route to the latter, I tried to stop in at Hee Mee Bakery. But here’s a delightful local practice: restaurants, coffee shops, delis simply close at 2 or even 1 pm! That’s right. They close up shop, lunch places, at 1 in the afternoon on a Friday (or any other day) many of them. A lighting store where I took a lamp to be repaired last week keeps the hours 11-3, and any given establishment might be open Thurs through Saturday 12-5, and Sunday if you’re lucky.

It all worked out as I stopped into the very cool Ceres, a storefront with a striped awning that sells hand-made pasta, focaccio, a simple salad or two, San Pellegrino sparkling juices, delicious pastries and good coffee. No indoor seating so I set up shop on a bench across the street next to a friendly man who was heavily intoxicated, asking all passerbys for money, and as I rose to leave brandished a wad of bills (to which I had contributed) and slurred, “Where’re we going tonight, baby?” I felt right at home.

Then I wandered around the corner to sit in front of the Museum and drink my coffee before going in.

My view was of Old Town Artisans, an historick block of shopping and eating. Old adobe, turquoise trim, colorful stencils above the doorways, more benches in the sun, a homey warren of shops and places to sit, drink, snack. It’s kind of touristy, but not obnoxiously so, and everything moves at such a human, leisurely, plenty-of-time pace that I loved just being down there.

The neighborhood, El Presidio, I’d discovered and walked many times on my previous visits. Like much of Tucson, the streets are full of tucked-away courtyards and inviting doors behind which you just know whole worlds are conducted that you may or may not ever see. Nice to know they’re there anyway.

Back home, I have got me a new feeder specifically designed for nyjer seed, which attracts goldfinches. I have yet to see one, but the hummingbirds took awhile to show up to their feeder, too. Something to look forward to as I continue, once in a while anyway, to throw askde my cloak.