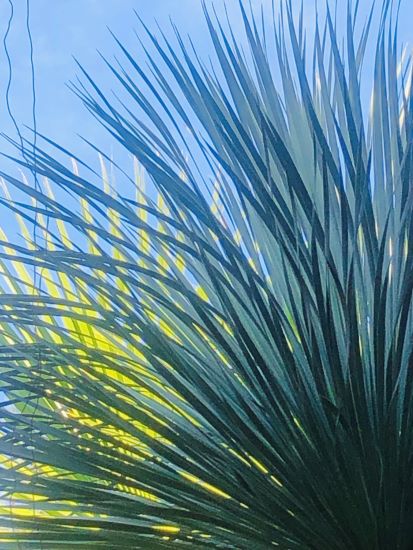 IN MY FRONT YARD

Welp, I am safely ensconced back in my dear Arizona home, still reeling a bit from my two-week trip to the East Coast.

My traveling days are over. (Though I think this every time I return from a trip).

Tucson is gorgeous in October.

It really was a kind of trip from hell, and not just because I fractured my patella, and I’m pretty sure sprained my ankle as well, on Day 3.

I think what I realized this trip was I have never really liked traveling! I consider it, as with much that I do, a kind of character-building enterprise. But I’m always nervous. I don’t especially like driving, even at home; never mind when I’m on the road, in a car rented from a strange airport. It’s impossible to eat right on the road. Et cetera. Not that I’m not crazy grateful to get to go ANYWHERE, but still.

One place I stayed was in this tiny village in the middle of nowhere in eastern Pennsylvania, very lovely, along the Delaware River. Well there was one commercial establishment, comprising several businesses, in the whole town and this airbnb was above, beside, and in the middle of it. After driving 3 or 4 hours that day, and knowing I had to change, brush my hair and dash out for dinner, I grasped at once that I was basically staying for two days and nights above a store. Which neither the host nor the pictures had disclosed.

Worse, a quick look around the “kitchen” (sink in bathroom, plastic utensils) revealed that the coffee situation was limited to “pods.” Pods! Naturally I had my own bag of Starbucks Verona with me, and my electric kettle, but the one thing I’d neglected to bring (and hadn’t needed till now, so hadn’t known I’d neglected) was my gold coffee-filter cone.

So I tracked the guy down outside, hobbling on my injured leg, and literally brayed, “Do you have a COFFEE MAKER!!??” And when he said No, I brayed even louder, “Well then, do you have a CONE????” LIterally like a crazed banshee. Like I even wanted or needed coffee right that minute, or obviously, ever.

That’s when I knew I’d gone a teeny bit off the rails.

The next morning I utilized a makeshift paper-towel coffee filter, then tried the pods, which weren’t even that bad. The pods were just a stand-in for living out of a suitcase, rinsing out clothes every night, ferrying around dried fruit, nuts, crackers and cheese in a plastic bag. I can’t stand eating out every meal especially because the food is inevitably overpriced AND not good.

With all that, I saw many people I love, tons of heart-wrenching East Coast “scenery,” and several fascinating late artists’ homes/studios/museums.

A couple of months ago I heard a homily in which the priest spoke of the concept of muscle memory.

Part of my muscle memory embraces the hour-long walk I have taken every day for years. But I couldn’t (and still can’t) walk (at least not for an hour). So being stopped dead in my tracks has been very interesting.

I think I have always known that good health of any kind is on sufferance–it may be because I have so often given thanks for being able to walk (partly this came from being friends with a guy who was in a wheelchair) that I haven’t really minded not being able to, for a while at least. In New York, as I may have said, my room was kitty-corner from the sacristy of St. Vincent Ferrer and as I rested in bed, I became convinced that Jesus was happy to have me near him in the tabernacle and the Lord knows I was happy to be near him. That was enough. That was everything. I’d stumble down there for daily Mass and even went to Confession once.

And that was the real muscle memory: Mass, prayer, online recovery meetings. The Rosary. Even though we may feel nothing: grinding resistance, emptiness, wandering thoughts, emptiness. Even when we feel completely wrung out, the muscle memory brings us to the practices that, over time, we have incorporated into our daily routine.

I would join the monks at Portsmouth (RI) Abbey for live-streaming Vespers with Gregorian chant.

Those were the things I really looked forward to, that formed the backbone of my day, and that didn’t depend on my ability to walk.

And that allowed me to reflect that my trip-and-fall was a bit of a wakeup call. To more carefully look, in every sense of the word, where I’m going. To slow down. To commit fully to my new life here. On some level, I am always looking to hedge my bets, straddle two (at least) worlds. One foot in, one foot out.

Coming back, I flew from Newark into Phoenix (no nonstops to NYC from Tucson), then took the shuttle bus. We rolled into town around 5:30, just as dusk was falling. And the mountains, the red-gold desert light, the long, wide-open horizon–it was the first time since I moved here in May that I truly felt: I am home.