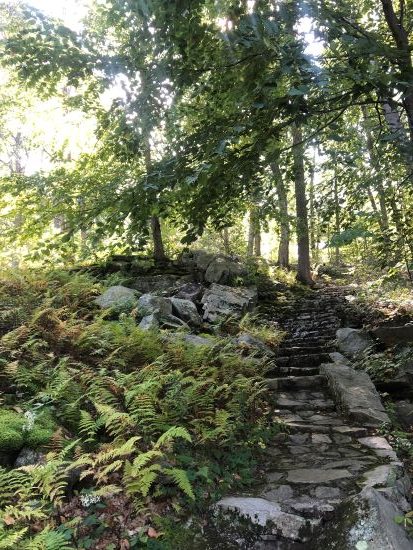 A SECTION OF THE TRAIL APPROACHING DRAGON ROCK: RUSSEL WRIGHT'S HOME AND STUDIO

I have visited several art studios on my East Coast trip.

Manitoga, in Garrison (upstate) New York, is the former house and studio of industrial designer Russel (yes, only one “l”) Wright (1904-1976). The house, also known as Dragon Rock, sits on 76 acres of what was originally an abandoned quarry. Wright spent decades restoring the land, learning of its flora, fauna, rocks, trees, soil and water, and fashioning his own little world.

Several trails meander through the woods and I explored them first: brown-spotted ferns; acorns in gorgeous shades of palm green, coral, and gold; and fabulous stands of mushrooms: some scarlet, others snow white, and one fan-shaped ledge, growing out from a tree-trunk, bright orange.

The hour-and-a-half tour led up and down many sets of granite steps, through patches of mossy “lawn,” through stands of rhododendron and mountain laurel, and over bridges, all with a stunning view of the quarry, now a pond/pool (in which however no-one can swim as built-up silt and debris make it dangerous (?)).

The house was both beautiful and completely impracticable with unever floors of granite blocks, “staircases” consisting of wide, uneven granite blocks that made for stairs of irregular height, and to my mind entirely too much darkness. That was true in fact also of Fonthill Castle and the Wharton Esherick studio/museum, the two other places I toured.

Maybe I have lived out West too long, but all three places were incredibly designed and fascinating and all promised to be freezing cold, damp, and terribly gloomy in the long East Coast winters.

Be that as it may, Manitoga had all kinds of inventive (for its time) touches. Formica, Naugahyde, fluourescent lights filtered through panels of burlap and waffled with fishing line filament. Styrofoam blocks for ceiling insulation, flexible black fireplace screen netting for curtains, a hidden drawer behind the dining room sideboard that slid up and down on a pulley and on which you could store dishes, glassware and such.

Wright switched out all his drapes, cushions, lighting fixtures and other accoutrements according to the season. In summer, he had long white strings depending from his living room floor-to-ceiling picture window and in winter, lengths of red ribbon (these both sounded kind of awful but you could draw them back and forth, like curtains, so that probably helped).

He pressed real leaves into one line of his dinnerware.

He lived more or less in the smaller studio and his daughter Annie (Wright’s wife Mary, also a designer, died in 1952) and her nanny lived in the house.

Those of us of a certain age will remember, at least vaguely, some of his designs. And he had one whole line made of Melamine, a substance I, for one, remember well.

We had a set of indestructible mint green Melamine dinnerware in my childhood home that we used for ages. Our dishes weren’t designed by Russel Wright, though; rather some nameless person with an eye toward an eight-children household, most of them boys, came up with a utilitarian design that would have served well for, say, an Army messhall.

I can picture those plates perfectly, having washed and dried them probably thousands of times. (Mom, always a fan of “elbow grease,” disdained a dishwasher and all these years later I agree with her completely).

Wright believed we would live happier lives if we surrounded ourselves with objects that were beautiful but not expensive.

All these years later, I agree with him completely, too.