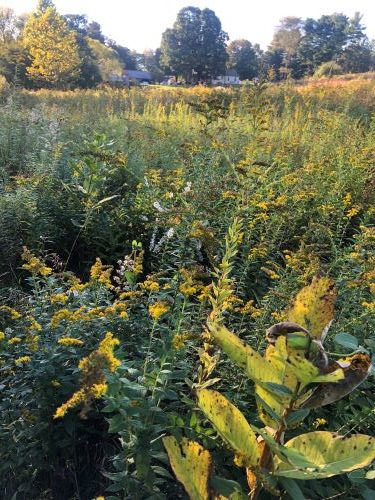 I have made it to Bucks County, Pennsylvania.

I’ve stayed the last two nights at what used to be a dairy farm in New Hope. Beautiful old stone house, surrounded by perennial beds–strawflowers, yarrow, morning glories, fuchsias, begonias, all evocatively decaying in early fall. The weather’s been unseasonably warm. Yesterday I was able to amble the path that’s been mown around the perimeter of the back field.

The grasses, the milkweed, goldenrod, Queen Anne’s lace, the afternoon light–everything makes me want to cry. I grew up in New Hampshire, a few states north obviously, but the East Coast landscape is deep, deep and dear to my heart. I feel in one way that I never left. In some ways I wish I never left.

My bum leg (trip and fall in NYC) is healing by the day. The cane I bought at Duane Reade (Walmart) fell apart after three days. I patched it up and then it died yesterday while I was touring Fonthill Castle.

Almost at that exact moment, however, I found I could more or less walk unaided and in a couple of more days may even be able to climb stairs like a normal person, instead of both feet on one step, inching up one at a time.

I’ve had a different kind of trip than I would have, and that’s been instructive and beautiful. On the other hand, the whole incident has made me newly aware of my fragility. I begin to see that old people, mostly overlooked by the world, play some mysterious role in holding the tension of the world.

When you’re young, you look at older people and sort of think, Well, they’ve had their lives and they don’t really care about or mind dying. It’s not quite that callous but on some level, that’s kind of the thought. The young are not equipped to dwell, and almost shouldn’t be dwelling, on death.

But if you’re lucky enough to make it this far, a whole new vista opens up. Another vantage point.

One main thing I see is the vitality of prayer. The years of prayer–however faltering, distracted, and lackluster; whatever form our “prayer” may take–have shaped and formed us. It’s one main thing we can continue doing, no matter how diminished we may become.

This lanscape–the colors, the bird calls, the cool, dew-laden air–all make me think of my mother. Think of her and long for her.

Jesus had it so right in giving us Mary.

to a young child

Márgarét, áre you gríeving
Over Goldengrove unleaving?
Leáves like the things of man, you
With your fresh thoughts care for, can you?
Ah! ás the heart grows older
It will come to such sights colder
By and by, nor spare a sigh
Though worlds of wanwood leafmeal lie;
And yet you wíll weep and know why.
Now no matter, child, the name:
Sórrow’s spríngs áre the same.
Nor mouth had, no nor mind, expressed
What heart heard of, ghost guessed:
It ís the blight man was born for,
It is Margaret you mourn for.