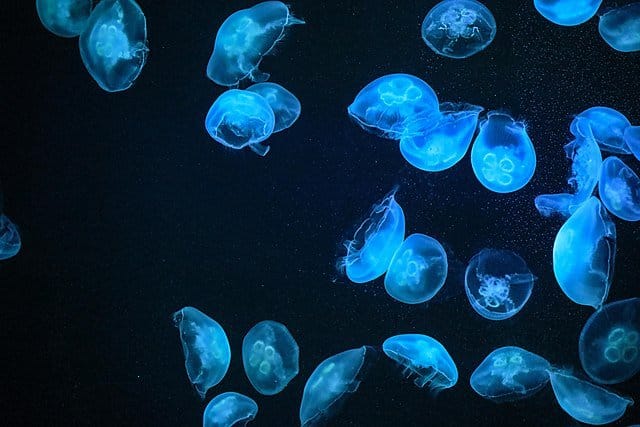 Put simply, bioluminescence is light produced by a chemical reaction within a living organism.

Fireflies and certain fungi aside, the vast majority of bioluminescence occurs in the ocean: fish, bacteria, and jellies, the most common forms of which are those creatures that float through the water with transparent bell-shaped bodies and tentacles.

There’s quite a bit of science in Widder’s new memoir: Below the Edge of Darkness: A Memoir of Exploring Light and Life in the Deep Sea. But you don’t have to be a scientist to be amazed and inspired by Widder’s life beneath the sea.

Born and bred in Massachusetts to academic parents, Widder was poised to become a biologist. But a spinal fracture, diagnosed during her college years, led to a surgery with complications that almost killed her and also rendered her temporarily blind. With amazing good humor, she emerged after four months flat on her back in a hospital bed.

“Fiat Lux” she names the chapter in which her sight slowly returns. Though she carefully refrains from labeling her recovery a miracle, it’s hard to miss the fact that out of this time of great personal darkness arose her life’s work, drive, and passion.

4 Replies to “BELOW THE EDGE OF DARKNESS”