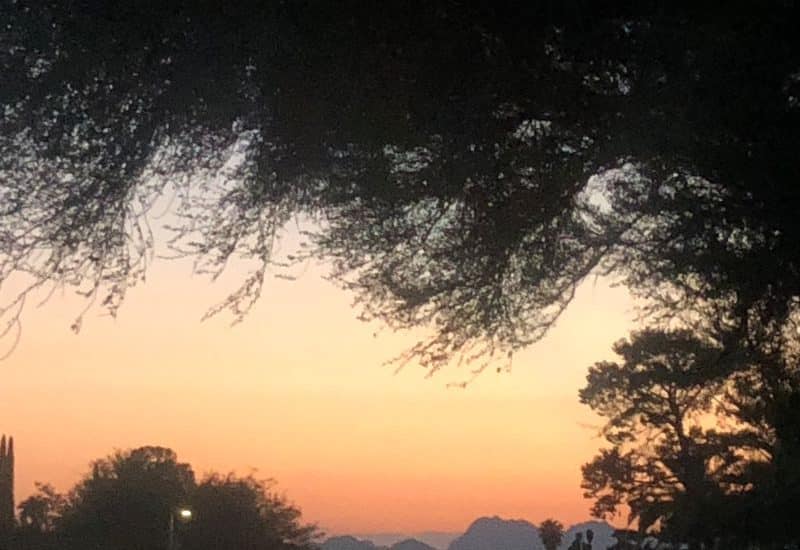 VIEW FROM MY CROSS STREET. THE OTHER NIGHT.

Back at the beginning of summer, for a reason I can’t now recall, I subscribed to the Times Literary Supplement. There, I learned of a book called Scraps of Wool that comprised excerpts from various British travel writers.

Since then, I have read biographies of Freya Stark and Isabelle Eberhardt. I’ve read Bruce Chatwin’s essay/short story collection What Am I Doing Here? I’ve read Gertrude Bell’s Persian Pictures. I took a long detour into Gavin Maxwell, reading Ring of Bright Water and a couple of biographies (next up: House of Elrig).

And I’ve discovered Eric Newby. Newby’s best-known work is probably A Short Walk in the Hindu Kush, a book I’d bumped into several times during the years but never read. Basically, Newby quits his London job in high fashion during the 1950s and decides to embark with his equally dotty (in a different way) friend Hugh to climb some impossibly treacherous peak in Afghanistan.

Neither has any real climbing experience. Hugh cares nothing for food; food is all Eric thinks of. Hugh is chin-up and debonair; Eric is a klutz–or paints himself to be. Actually the two of them were clearly highly intelligent, courageous, fit, and willing to endure copious amounts of suffering. As well as slightly to severely nuts. Anyway, the book is wonderful, not least because of Newby’s wicked, self-deprecating sense of humor.

Unwisely, we decided to carry loaded rucksacks. ‘To toughen ourselves up,’ as we optimistically put it.

“About forty pounds should be enough,” Hugh said, “so that we can press on.”

Our drivers were aghast. It was difficult to persuade Abdue Ghiyas that we were not out of our minds. With the temperature around 110 degrees, carrying our forty-pound loads and twirling our ice-axes, we set off from Jungula.

At first we congratulated ourselves on seeing more of the countryside on foot. What we had not taken into account was the diminished social status that was accorded to a couple of Europeans plodding through Asia with heavy loads on their backs. It was after a long mile, when we met two wild-looking crop-headed mountaineers coming down from above by a rough track, that we first realized that nobody admired us for what we were doing. They themselves were carrying immense loads of rock salt in conical baskets. We waved cheerfully but they uttered such angry cries and made such threatening gestures that we passed hurriedly on. They turned to shout after us. It was always the same word.

“Is it rude in Persian?”

“Very, they think we should be on horseback.”

Newby wrote a bunch of other books. A Small Place in Italy, which I just finished, is far superior to Under the Tuscan Sun–funnier, truer and a whole lot sadder. As a POW during WWII and on the run from the Fascists he’d hidden in the woods and caves of Tuscany, helped by many intrepid souls, one of whom, Wanda, he later married.

Don’t even ask about my Rilke/Rodin kick.

Anyway, speaking of travel, I myself am setting off next Tuesday for a two-week jaunt to the East Coast! A bit of a working holiday as I’ll be visiting lots of museums, gardens, and suchnot, but I’d do that anyway.

Six nights in NY, where I will stay in a Dominican guest room around the corner from St. Vincent Ferrer, onen of my all-time favorite churches, in the Upper East Side. Then down to Bucks Cy, PA, and then to the Woodstock area in upstate New York.

I haven’t been on a plane, or really anywhere, since COVID, so I’m excited and also nervous. Not so much about COVID, just about leaving the emotional safely of my little cocoon. Though I don’t feel all that safe anywhere, ever, so traveling probably won’t make that much difference.

All of which is a roundabout way of saying–how lucky can you get?

6 Replies to “A SHORT WALK”