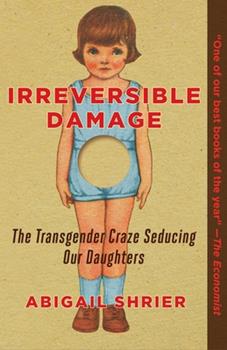 A graduate of Columbia College, the University of Oxford, and Yale Law School, Shrier lives in LA and is a mother.

Supportive of those with transgenderism who transition as adults, she naturally decries  anti-transgender discrimination of any kind. She writes here exclusively of the trans phenomenon of “rapid onset gender dysphoria” as it affects teenage girls.

The statistics are staggering. A decade ago, the Diagnostic and Statistical Manual (DSM-5) reported an expected incidence of gender dysphoria for natal females, based on those who sought medical intervention, at .002-.003 percent of the population.

In the last decade, the incidence has increased by 1000%. In Britain, the increase is 4000%. Puberty blockers, testosterone, and surgery—all with irreversible effects, are now routinely administered, based largely on the subjective feeling of the teen in question that she was born into the wrong body. “The children lead the way” is the ethos. Some teen girls threaten to commit suicide if their demands aren’t met and thus withholding of consent has come culturally to be considered an act of violence.

Here’s a recent piece from Commentary also reflecting on the question of whether pre-adolescents are equipped under the circumstances to give their informed consent.