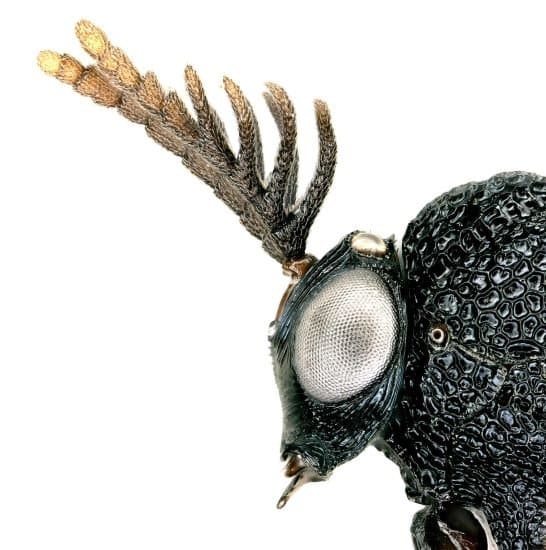 “Meet your neighbors!” invites the Natural History Museum, but they’re not talking about the people next door. The exhibit “Spiky, Hairy, Shiny: Insects of LA,” runs through April 1, 2022.

All over the city, for the last 10 years people have gathered insects to help the Museum staff with its BioSCAN (Biodiversity Science: City and Nature) project. The project’s ostensible goal is to track climate change, but the insects were so wondrous in their color and design that the Museum decided to curate some of the more startlingly beautiful photographs and offer the results to the public.

If you come to the exhibit in the flesh, you’ll find large-format photographs of our local insects displayed next to life-size specimens. You can hear recordings of L.A.’s bugs across the span of an entire day. And you can learn more about the BioSCAN project

But if you’re not up for making the trek to the USC area in the summer heat, you can also check out the online exhibition and view some of these stunning and varied neighbors online.

You could not make these creatures up!

One point immediately jumps out: how many of the insects resemble precious jewels.

The mason bee’s (Osmia sp) main colors, for example, are royal: lapis lazuli blue and turquoise. Get this: it sports a “crown” consisting of three extra eyes called “ocelli.”

The eyes of the mantisfly (Plega sp.) are two perfectly round, perfectly balanced white globes that look for all the world like rare pearls.

The keeled treehopper (Antianthe expansa) resembles a brooch that an elegantly-dressed woman might pin to her lapel.

Another thought that rises to mind is that if these insects were any bigger, we humans would simply die of fright.

The sedate acorn weevil (Curculio occidentis) resembles a beige sofa cushion, albeit one with six hairy legs and a long black proboscis.

A third compelling characteristic of the insects is their strange and eccentric habits.

The snakefly (Agulla sp.) lays eggs with her tail.

The kids should especially love this one: The neatly oval, lettuce-green and old-ivory Sharpshooter (Graphocephala versuta) feeds on plant juice and squirts the leftovers out its rear end.

To my knowledge, I’ve never seen any of these insects, though I’ve always had some form of LA garden, take a walk each day, and consider myself fairly observant. Which just goes to show how effectively the insects camouflage themselves and how much I, for one, miss of the pageantry of life with which we’re surrounded.

The BioSCAN project reminds us that our neighborhood insects are also like canaries in coal mines: sensitive messengers carrying news of the way the environment is changing and the effect those changes are having upon the natural world.

I can’t resist a plug here for the 1821 classic: Fabre’s Book of Insects. Jean-Henri Fabre (1823-1915) was a self-taught French naturalist and entomologist who devoted most of his life to the exploration and observation of the insects he found in his rural back yard.

The science fascinates, but the genius of Fabre—a devout Catholic—was to add his well-developed imagination to the mix. The insect world, to his mind, was full of skilled surgeons, expert anesthesiologists, master mathematicians, martyrs, Christ-figures, and criminals.

For example: “The chilly, bare-skinned Psyche [Caterpillar] builds himself a portable shelter, a travelling cottage which the owner never leaves until he becomes a Moth…a suit of clothes out of sticks. And since this would be a regular hair-shirt to a skin so delicate as his, he puts in a thick lining of silk.”

“[T]he young Mantis finds it necessary to wear an overall when coming into the world…The creature…appears in swaddling-clothes, and has the shape of a boat.” Later we learn that “The Mantis, I fear, has no heart. She eats her husband and deserts her children.”

But it’s in the labors of the Dung Beetle, doggedly rolling its huge sphere of refuse and leavings, that I feel most closely aligned to the insects. Fabre might have been describing a typical human day—or life—when he wrote:

“The ball, that enormous burden, is painfully hoisted step by step, with in finite precautions, to a certain height, always backwards. Then by some rash movement all this toil is wasted: the ball rolls down, dragging the Beetle with it. Once more the heights are climbed, and another fall is the result. Again and again the insect begins the ascent. The merest trifle ruins everything; a grass-root may trip him up or a smooth bit of gravel make him slip, and down come ball and Beetle, all mixed up together. Ten or twenty times he will start afresh, till at last he is successful, or else sees the hopelessness of his efforts and resigns himself to taking the level road.”