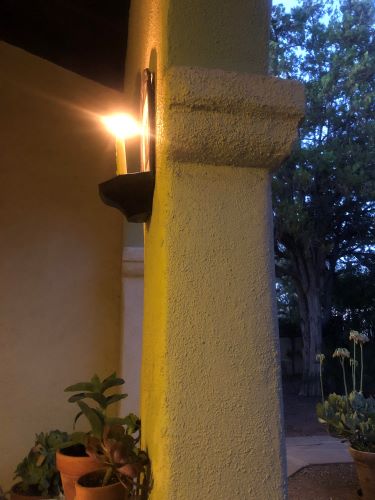 EVENING PRAYER ON THE PATIO

“Evolution and Faith: What Is the Problem?”, an essay by Georgetown University Distinguished Professor of theology John F. Haught, was published earlier this year by the Portsmouth [RI] Institute for Faith and Culture.

Having asked the same question myself many times, I read the article with excitement and interest.

I am no scientist, and admittedly, even after reading several books on Darwin, I don’t fully grasp his theory.

But if God is the maker of all that is seen and unseen: it is simply impossible that science could be at odds with religion. If it seems to be, it’s because we have misunderstood, misinterpreted or misconstrued God.

That’s because we see things from our human standpoint, and from a human standpoint our major goals are always 1) to avoid  suffering and 2) to amass as much power, property, and prestige as possible. We assume a “loving” God must want those things for us as well.

In the beginning was the Word—and I wonder if, in the simplest terms, God and therefore love are built on, formed around, the idea of story. Atheists have no story; followers of Christ have the greatest story ever told.

If life is not to be inert, static, one-dimensional, boring, we need drama and story built into the whole notion of ongoing creation. Drama is not possible without conflict, desire, obstacles—which is to say without suffering.

Moreover, the laws of science have to be immutable. In order to perpetuate the species, natural laws have to be in effect that over time favor the strong, the intelligent, the able-bodied and minded. “The rain falls on the just and the unjust,” as Christ observed, which is perhaps another way of saying (among other things) that the fittest do indeed survive.

To the nonbeliever, Haught points out, this suggests “an indifferent and mindless universe.”

But from an unschooled layperson’s, admittedly intuitive point of view, Christ’s whole ministry was in one way a transcending—a fulfilling, as he put it—of these immutable laws of nature.

His mission wasn’t to abolish the laws of nature, but rather to establish that even with those laws in place, we can live in interior freedom, integrity and love.

In his Cross and Resurrection, Christ gathered all of creation to himself: all those who had been born in chronological time before him and never had a chance to follow him. All those in hell, where he descended for three days after his death. All those who have died or will die forgotten, discarded, abandoned, in agony; all failures, losers, misfits: all those disordered by a propensity to sin. All those too weak to survive, prosper and procreate in this red-in-tooth-and-claw world.

In so doing, he assured that in nature’s scheme, we may be dispensable; in God’s scheme not a sparrow falls but what He knows.

The world favors efficiency: God favors love and extra, “useless” labor that love inevitably entails: “Who would not leave the ninety-nine and go in search of the one lost sheep? “

The driving goal of strong, healthy parents may be to produce strong, healthy offspring. But Christ asked: “Who is my mother and who are my brothers?…Whoever does the will of my Father in heaven is my brother, and sister, and mother.”

In his infinite humility and love, in offering up his only Son, in a sense God voluntarily constrained himself from using more power than he gave us. He will accompany us, suffer with us, suffer insofar as possible, as Christ did on the cross, for us. Suffer, in the Eucharist, as us.

But he won’t interfere. He won’t force. He won’t do for us what we could do for ourselves. Children will suffer: he gives us the hearts, hands, and strength to succor them. Natural disasters, illness, old age will cause untold numbers of deaths: ditto.

As Haught observes: “Debates about God and evolution are usually so obsessed with the idea that God is a “designer” that the biblical sense of God as an infinite self-giving love that opens up an ever new future for the world goes unnoticed.”

Science can discover the intricacies of human conception; it can’t form the human conscience so as to cherish and protect all life.

Science can give us astrophysics; it can’t explain why we weep at the sight of the stars.

Science can describe the phenomenon of human starvation: it cannot begin to “explain” St. Maxmilian Kolbe, who offered himself up to die in place of a fellow prisoner in a bunker at Auschwitz.

Science has a word, in other words, and a fascinating word: but science never has the last word.

The last word is the same as the first Word. The alpha and the omega: Christ.

17 Replies to “EVOLUTION AND FAITH”