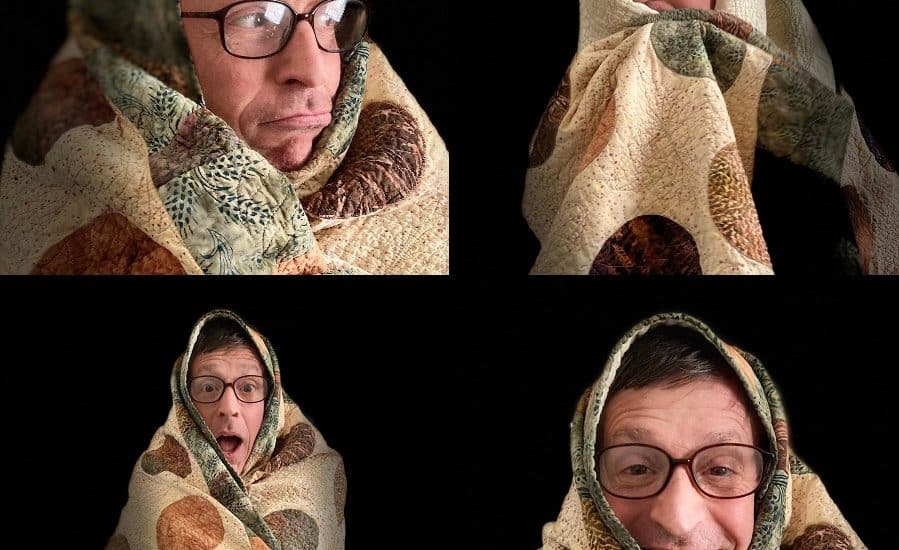 I’m often aware of the many invisible hands and hearts behind any given Mass: the people who launder and iron the altar cloths, who replace the flowers and candles, who polish the vessels.

With theaters and museums opening, I thought of my friend Tom Duffy. As a Senior Art Preparator at LACMA, he’s one heart and pair of hands behind the exhibits we museum-goers will soon, once again, be allowed to drink in.

Tom has been making his way in the art world since 1996. He started in LA, first at the Skirball, then MOCA, moved on to the Toledo Museum of Art and the Everson Museum in Syracuse. Then he spent “a very informative, enjoyable three years of my journey” at at LA Packing, and was then at the Broad, the Getty, and since 2018, LACMA.

Depending on the institution, he might be called a preparator or an installer or a carpenter or a light designer. At LACMA, he and others similarly situated are responsible for just one aspect of the installation.

Tom is one of many Senior Art Preparators. Above him are his supervisors, and above them the head of API: Art Preparation and Installation.

“We walk into a deluxe gallery space where the painters and carpenters have prepared the walls, the pedestals are all in place, the plexi bonnets are ready to go. My role is to receive the crates of artwork at the loading dock, convey it to the gallery, pop open those crates, remove the artwork and place it.

What’s fun for Tom is working with so many different departments. Keep in mind that many of these works are valued at millions of dollars.

The Curatorial Department, having been involved for 3, 5, 10 years out, makes the aesthetic choices. They ask themselves: How do we see this work? What story do we want to tell?

“We also work closely with the Registration Department. They’ve organized the shipment, talked with the lending institutions, covered insurance. They’ve tracked it all. When we pop open a crate, they’re there to document whether, say, in the truck ride from A to B, anything has changed or happened.”

The Conservation Department is also essential. The conservators come in and generate a condition report. This scratch on the frame is new. In uncrating this particular sculpture, there are flakes of dust. Can we determine that, depending on where it’s coming from, there’s for example no insect infestation?

“We really want a lot of eyes on us at all times. Conservation, curatorial, and registration. Because the worst thing that could happen would be a tear in the canvas or breakage and there were no outside witnesses. We want to have people able to assert that we followed the protocol and the damage occurred anyway.”

The real thrill is getting to put (gloved) hands on these works. “In a gallery there’s often a stanchion or a tape line on the floor. We have the luxury and honor of being the people who are actually allowed up close. Are these D-rings strong enough? What if a viewer inadvertently jostles this pedestal: is the work sufficiently secured?”

It’s been an uncertain year. How to get the job done while at the same time maintaining the requisite 6 feet of distance with the mask and the face shield?

“I’ve felt so safe and supported at LACMA. Our superiors and boss at API are incredibly mindful of being prepared and being safe, both with the artwork and with each other.”

Many of the works are flown in. In that case, the work must be allowed to relax for 24 hours and acclimate to LA’s temperature and humidity.

More often than not, the preparators would know months beforehand what the work is and how best to handle it in a safe and reverent way.

“I’ve had the experience of having all the stats beforehand: size, weight, steps needed to uncrate. But I didn’t fully appreciate the magnificence of the work until we uncrate it.  That can be a revelation and generate real excitement.”

Tom’s latest adventure: helping to move LACMA’s modern collection, which will now be housed on the third floor of the 5905 Wilshire Boulevard campus: home of BCAM (Broad Contemporary Art Museum).

“What brings me the biggest pleasure is to successfully work with the community. All of these different hearts and minds who have one goal: to celebrate the works of these great artists, and to share them with an audience.”

An associate recently did a three-minute time-lapse video, representing days of collective work, of Tom’s team moving a gallery of Giacometti sculptures.

“I teared up when I saw it. To see my friends and peers coming together to realize a collective goal. Hard work that was joyful. We all bring so many talents to the table. Those individuals had found their respective roles. And together, they played them like a Stradivarius.”

2 Replies to “BEHIND THE SCENES WITH AN ART INSTALLER”