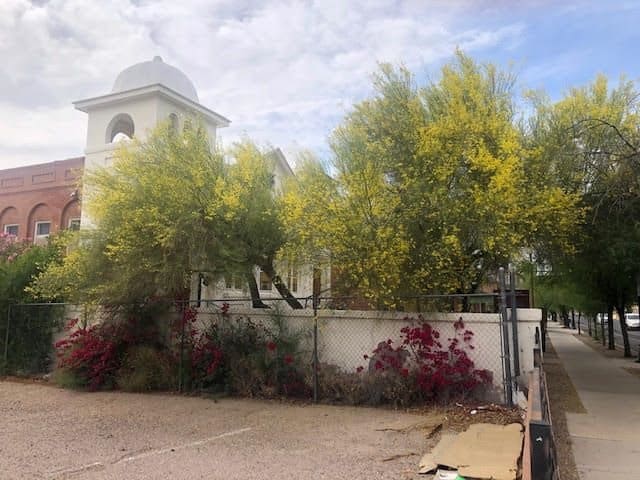 Well folks, a bit of an update on my recent peregrinations…

I have found a house to rent in Tucson, a feat I recognize absolutely as the work of the Holy Spirit as, to a person, every one to whom I’ve spoken here has described the “seller’s market” real estate situation as “insane,” “exploding,” “we’ve never seen anything like this in 50 years.”

Somehow, I managed to find a ’30s walled adobe with hardwood floors, a garage, washer-dryer, built-in bookcases, French doors, and a garden front and back in one of the city’s most charming historic neighborhoods, Sam Hughes. “You don’t need to drive anywhere if you live in this historic midtown neighborhood” reads one article, which is perfect as during the past few weeks, I have become even more of a daily wanderer than usual.

So far I have found a dentist, someone to cut my hair, and a nail joint. I have a library card. I have scoped out the Trader Joe’s situation, the best place to buy bread, the Little Free Libraries, the Tucson Museum of Art for greeting cards.

Devastating discovery: Tucson does not have 99 Cents Only Stores, which have been a mainstay of my marketing life for many years. Cleaning supplies, toiletries, produce, oat milk, coconut water, flax seed…Aspirin, cough drops, hydrogen peroxide, Sour Patch Watermelon…I’m sure I have saved hundreds if not thousands of dollars at the 99.

Well, Tucson does not have 99 Cents Only Stores. They have Dollar Trees, which are a sad, poor facsimile. First of all, most of the stuff is more like three or four or five dollars, not 99 cents, and some of it is MORE expensive than if you just went to Target or Walgreen’s like a normal person. So–this is one of the many ways I am “letting go.”

Everyone has been incredibly helpful and friendly. One day I ventured up to the downtown Tucson Post Office to rent a box (never dreaming I would find a place with an actual address and its own mailbox before the end of the month). In LA, I bring a bottle of water, snacks, and a book to the PO. It’s nothing to have to wait in line 20 minutes just to mail a package, and that’s at a small branch office.

So I figured whoa, the main downtown Tucson PO–it must be crammed! Especially during what is essentially still COVID! So I geared up, paced myself, girded my loins, ventured forth with full supplies–and there were two other people inside. And two helpful, efficient clerks.

The whole city is like that. 7, 8, 9 in the morning–rush hour in other words–not a car in sight as I cross a major north-south avenue half a mile south of downtown. St. Augustine Cathedral has a 7 am and a noon Mass which if I book it, I can make on foot from my airbnb in 15 minutes.

Yesterday I went online to set a shut-off date for SoCal Gas, and almost cried: a utility I’ve been paying monthly (and so reasonable!) for over 30 years. I thought of all the dinners cooked, tea kettles boiled, ancient gas heater pilot lights lit (every single place I’ve lived has had an ancient gas heater). My new people are called Southwest Gas and in signing up I learned they wanted an $80 deposit and that you can ask your old utility people for a Letter of Credit to have the deposit waived! How cool is that?

I’ll go back to Pasadena near the end of the month, pack up the rest of my stuff, give some things away, and then it will be moving day, which my friends are basically doing for/with me. I am not driving a UHaul, of any size, trust me.

Beneath the surface: excitement, sadness, fear. So many people I love, in so many different places–and so little time we have in our short habitation, even under the best of circumstances, on this earth!

So much gratitude. Every day I receive a note of encouragement–someone has discovered my work and IDENTIFIES COMPLETELY (my favorite). Someone wants to be in my next Writing Workshop. Someone has pored over a Psalm or a Gospel passage, written a killer reflection, and sent it out to 15 or 20 of their friends, among whom I’m honored to be counted.

Someone sends along a YouTube of a guy who lives in a cave and prays for the world. Someone (actually lately a whole bunch of people) has been diagnosed with cancer, and is asking for prayers. Someone vaguely remembers some saint I may or may not have written about who may or may not have been a drug addict, or French, or a convert: can I help?

Yesterday I went up to my PO box and found a letter from a priest in St. Paul, MN, enclosing a prayer card of a couple of whom I write in this month’s Magnificat. Cyprien and Daphrose Rugamba, a husband and wife active in a Catholic association called the Emmanuel Community, were assassinated in their home, along with six of their ten children, during the Rwandan genocide.

Brother against brother, neighbor against neighbor, betrayal by the people closest to us: it’s the oldest story in the book, and it crosses all lines of era, geography, gender and race. Cyprien had repeatedly strayed from the marriage but Daphrose had held steady, as we women at our best tend to do. And Cyprien, as men at their best tend to do, had straightened up and flown right. The two had supported the arts and native craftspeople. They had tried to spread light, hope and love to the community and to their children.

That was the second letter I’ve received at my new address. The first was an envelope from a friend with tiny medallions of St. Joseph, St. Thérèse of Lisieux, and St. Peregrine, patron saint of cancer. The saints with whose blood the Church continues to be watered. Lord, I am not worthy, and may I keep them close.

The Bishop even welcomed me to town the other day!

Which is a long-winded way of saying: All is well. As always, I’m in the best possible hands.