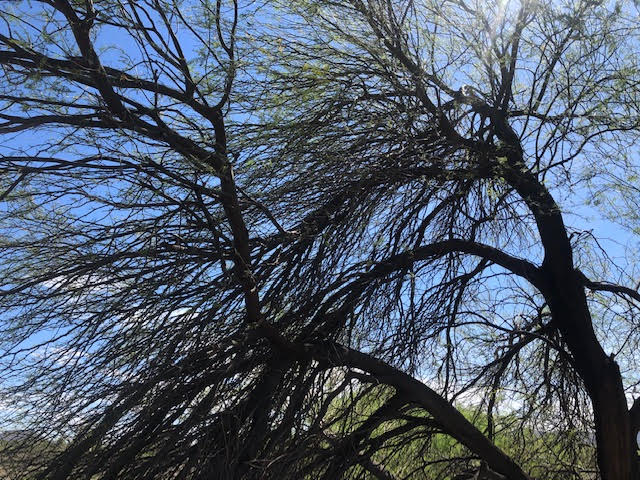 From a friend, last week, at Madonna House in Combermere, Ontario:

“The Loons and the Great Blue Heron have returned from the south. The maple sap has quit running and the maple trees are budding. Yesterday there was a work bee to take the leaves off the flower beds because the crocuses have just started to bloom. All of this swells up to one burst of song…Christ is Risen!”

From Pittsburgh, PA, a note from another friend about the derelict garden she, her husband and her daughter have been resurrecting in their back yard: “All that is left of what had been are random Daffodils and some struggling peony shoots.   Anyway, we are done with the most back-breaking part of digging up bajillions of weeds and hoeing and mixing in topsoil!!!!!! I can’t wait to plant.”

A third friend who teaches at a university in Queens shared some thoughts on hoarding/accumulating, a subject on which she’d once taught a course. She wrote:

“The hoarding compulsion also has an order to it, and invested meaning. When you watch these stories [from the reality show, Hoarders], people are brilliant and they see meaning and beauty in everything”…

My friend mentioned two examples: a woman kept a tinfoil gum wrapper because it was so beautiful, and another who kept a single pen cap because, when playing board games, it might make a handy replacement.

The pen cap, the foil wrapper–I so get the attachment to them, and the investing of things with supernatural significance. I’m contemplating all of this deeply as I prepare to move to Tucson. I’m here now, at an airbnb, and will return to Pasadena near the end of the month to pack up the rest of my stuff for transport.

I have boxes of what I call tchotchkes: tiny pottery bowls, little metal birds, prayer cards, retablos. When packed up, they really don’t take up that much room and mean far more to me than my furniture–the latter of which I am seriously thinking of almost all giving away, along with my plants and garden stuff, which is a real stretch…there’ll be more stuff in Tucson…

But these little things, many of which have a religious dimension–crucifixes, milagros, statues of St. Dymphna, patron saint of the mentally ill, and my very favorite Sacred Heart of Jesus statue from the mass-produced ’50s that sits on my desk–do make for a little “portable kingdom.” Many of them were gifts, or little things I’ve picked up on my travels…Anyway, God bless us all in our spiritual crises…hoarders, ascetics, and everything in between.

I came here thinking I might already have found a place: namely, this house in the mountains way above Tucson on 8 acres of land. Me and the coyotes, bobcats, cacti, ocotillo and birds! Room for a real piano!

Then I discovered that Oro Valley is the Orange County of Tucson. This particular house is totally cool, but it’s surrounded by development and I’m not sure there is anything more depressing than prisitine desert on which sit giant clusters of huge, air-conditioned houses with pools, concrete, and lawns. No-one walks (I’m not talking about hiking; I mean walking, a leisurely, observant stroll about your immediate neighborhood): I imagine people more or less going from air-conditioned house to air-conditioned car or more likely, fleeing in the summer for one of their other homes.

Also the javelinas eat all the plants, your compost and your garbage. One friend said the javelinas in her father’s back yard had learned the weekly trash day and bore down to wreak mayhem in the few hours the barrels were unlocked. Also, I would have had to switch from T-Mobile to Verizon and probably pay 200 bucks a month for crappy wifi and a mobile hotspot Jetpack as the place was off by itself and not connected to any established grid or whatever they call it.

So then I started looking down here in the city, which has tons of wonderful, charming, funky, diverse, historic neighborhoods. I found one place, a large adobe studio that an artist had tricked out with cool inlaid-mosaic iron gates, et cetera. and had 10-foot ceilings, a shaded patio and a yard. This turned out to be directly across the street from a large elementary school. Everything else I’ve liked has been directly across the street from an industrial park, a bank of office buildings, a skate park, or an abandoned lot with a Municipal Variance sign on the fence, meaning someone’s about to begin a two- or three-year construction project.

Also, turns out the entire world is migrating here and other similar smallish cities in the wake of COVID, so there’s not much available in the way of rentals and as a bonus everyone hates and despises Californians (not that that’s anything new).

I must say I feel fairly peaceful in the midst of it all. I’m in a beautiful little casita till the end of the month, the front yard filled with mallows of various colors, native flowers, cacti, and aloes. I’ve decided it’s enough of a spiritual-physical-psychic stretch to be living out of a suitcase once again (I’ve done this so many times in my life, it feels strangely familiar and even cozy), to be mentally sorting my stuff (most of which, back in LA, is packed), to be contemplating a move to a new city after thirty years, to be dealing with the logistics of renting a UHaul, movers, saying farewell to my apartment of the last six years, not to mention my garden (leaving a garden is worthy of its own post, if not more than one).

So I’ve decided to pare down, get my stuff here and put it in storage (distasteful as that may be), rent another airbnb for May, let my mind and heart settle, and start looking for a more permanent space in earnest then.

Take it slow, in other words.

Because in the meantime, I still have my weekly column, my monthly Magnficat column, many other work/spiritual/recovery obligations, and dental work to tend to. Where to have the mail forwarded to!? Must rent PO box today. Plus it’s about to be about 150 degrees in Tucson every day for four months.

Right now, though, the temperature is splendid: my favorite, 80s to low 90s. I take a long walk every day, up and down the residential streets. Can walk to the art museums, the PO, and best of all, to the Cathedral of St. Augustine, which has Masses at both at 7 and noon, and is open all day for prayer.

Many many people to hold in prayer these days, as always. Dying fathers, troubled teens, people with dire diagneses, people who are depressed, enraged, bewildered, bereft, alone.

So it’s a rich, rich time for me. Maybe I will find that house with room for a real piano, and maybe I’ll find a studio where I can at least set up my keyboard and have a few plants on the patio. I think I had some idea of moving to Tucson and here, at last, I would get the dream space for which I have longed all my life. But as with romantic love, which has also somehow eluded me in this vale of tears…I’ve kind of lived my life in places that have always been in one way great and in another have always been wrong in some major way, uncomfortable to the point of being penitential.

But does any of it really matter? In the midst of suffering and exile, the contemplative heart is formed, nurtures, and grows. I have never had the knack for making myself comfortable: I will live in a place for years without ever getting a really good reading lamp, will walk every single day for decades without ever quite getting the right shoes, will bemoan that my hair is too short but every time it starts to get long, decide I look like a scarecrow and hack it off with a pair of kitchen scissors without even looking in a mirror.

What I never forget is to have really good tcotchkes, a few plants to love, friends to shore me up, to inspire me, challenge me, make me laugh, share the journey. (And from whose emails to quote, you know who you are and thank you!)

Four such friends, in particular, have volunteered, if you can believe such goodness and generosity exist, to help me make the move. Not just help, but really pretty much do it, as in load and drive the truck…More on the hideous vulnerability/fear of receiving later…

And what I have never ever forgotten, truly neglected, or “gotten wrong”–because you CAN’T get him wrong if your basic motive is love–is Christ.

12 Replies to “THE PILGRIMAGE CONTINUES”