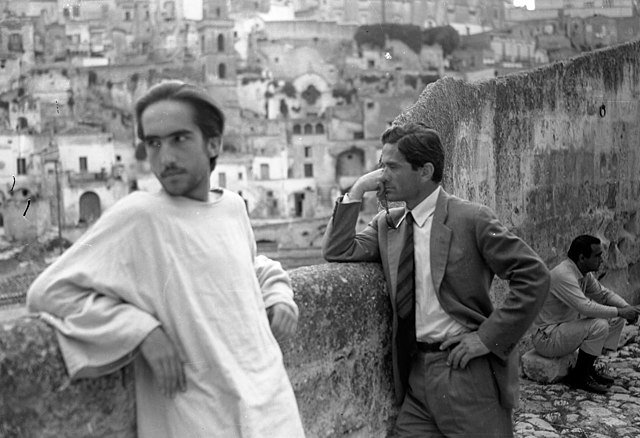 PASOLINI AND ENRIQUE IRAZOQUI (JESUS) DURING A BREAK IN FILMING

This one is from Catholic Culture, with Thomas Mirus and James T. Majewski, good Catholic boys from NYC.

“In 1962, inspired by Pope St. John XXIII’s outreach to non-Christian artists, a gay communist picked up the Gospels and ended up making a film about Jesus. Nervous yet? But one thing with which you can’t charge Pier Paolo Pasolini is taking liberties with his source material – the dialogue in The Gospel According to Matthew is drawn entirely from that book of the Bible.

The Vatican’s newspaper once called this the best film ever made about Jesus. It certainly is one of the most unique adaptations, in the austerity of its approach (almost willful in its refusal to elaborate on Scripture), in its counterintuitive casting, in its portrayal of Our Lord’s fierce urgency in delivering His message. There are many interesting moments to discuss, but the core question for Thomas and James is: Does the minimalism of the Gospel account translate well to the screen without embellishment, or does what leaves room for imagination on the page become barren in a visual medium?

Memoirist and columnist Heather King (you may have read her work in Magnificat or Angelus) joins the show to discuss this, one of her favorite films.

GIVE IT A LOOK/LISTEN!