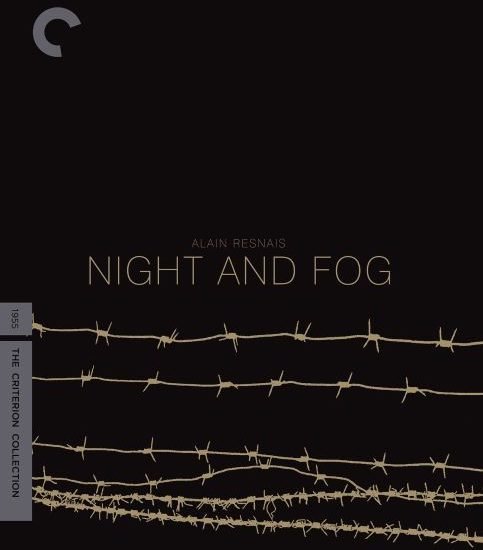 Night and Fog (1956), an award-winning documentary short by French director Alain Resnais, was made ten years after the liberation of the Nazi death camps,

Resnais re-visited the abandoned grounds of Auschwitz and Majdanek and interspersed the pastoral scenes with wartime footage to create one of the first cinematic reflections on the Holocaust.

Resnais (1922-2014), the French director and screenwriter better known for such films as Hiroshima Mon Amour and Last Year at Marienbad, was initially reluctant to make the documentary, thinking he had no right to speak for those who had suffered. He agreed only when poet and novelist Jean Cayrol, a former concentration camp inmate, signed on to write the script.

The title derives from the German phrase Nacht und Nebel (Night and Fog). On December 7, 1941 Hitler had issued a decree ordering the arrest of those who “threatened German security,” followed by their deportation to camps in which they would vanish, quietly and forever, into “the night and fog.”

Archival footage, fittingly pivoting to black-and-white, is introduced next. The visit to Dachau of Himmler (“We must annihilate, but efficiently”). The arrival of trainloads of prisoners, packed 100 people to a car. Inmates in striped uniforms forced to perform crushing labor: freezing cold in winter; sweltering in summer. Prisoners forced to build their own crematoria graves.

Mountains of eyeglasses, combs, shaving brushes, human hair: “Here are the stockpiles of the Nazis at war.”

The ceilings of gas chambers, raked by desperate fingernails. The surgical ward where human experiments were performed: amputations, castrations, burnings with phosphorus. The barred windows of the prison—yes, a prison within a death camp—where people were kept in cells so small they could neither stand up nor lie down and tortured for days on end.

At one point, the footage segues from the barracks, where starving, beaten, lice-ridden prisoners slept three to a bed in unimaginably cramped, low-ceilinged quarters, to a neat, orderly space with a shipshape bed, a desk, a comfortable chair, a window: “Kapos have their own rooms where they can hoard supplies and receive young favorites.”

More elite still was the Commandant’s whitewashed villa, surrounded by flowers, “where his wife keeps house, and even entertains, like in any other garrison.”

At first, I sneered in horror: How could they? Then I realized that the film is a kind of gruesome mirror: isn’t it true that most of us live in comfort and security while billions of our brothers and sisters throughout the world are starving, homeless, ill, dying? That the sufferers are generally more than a few hundred yards away doesn’t diminish the fact.

Living corpses staring uncomprehending from behind barbed wire at the troops who had come to liberate them.

Ten years later, back in the living-color abandoned camps, peace and silence reign. Wildflowers bloom. Streams trickle. The sun shines over the rusted barbed wire. Ivy has covered the brick wall of the enclosure where prisoners were taken to be shot.

But have we really lulled ourselves into believing that the Holocaust was so outside the pale; a never-to-be-repeated monstrosity?

“Who among us keeps watch…to warn of the arrival of the new executioners? Are their faces really so different than ours?…”

“We pretend to take up hope again as the images recede into the past, as if we were cured once and for all of the scourge of the camps. We pretend it all happened only once, at a given time and place. We turn a blind eye to what surrounds us and a deaf ear to humanity’s never-ending cry.”

Christ emerged from the womb with his ear cocked to humanity’s never-ending cry. “Did you not know I had to be about my Father’s business?” he was asking his parents, already, as a boy. His business was healing, casting out demons, imparting hope. Calling out hypocrisy. Telling us to stay awake, to come alive. Forgiving sins. Leaving us with his final commandment: “Love one another as I have loved you.”

His business was to show us what that love looks like; what love requires.

And he knew all his life that the executioners were coming for him.

Good Friday is an apt day to remember an anecdote from Night, Elie Wiesel’s memoir of his time as a 15-year-old in Auschwitz. At one point, Wiesel describes the death of a young boy in the camp who had been sentenced to death by hanging.

“Where is God? Where is He?” someone behind me asked.

For more than half an hour [the child in the noose] stayed there, struggling between life and death, dying in slow agony under our eyes. And we had to look him full in the face. He was still alive when I passed in front of him. His tongue was still red, his eyes were not yet glazed.

Behind me, I heard the same man asking:

And I heard a voice within me answer him:

“Where is He? Here He is—He is hanging here on this gallows.”