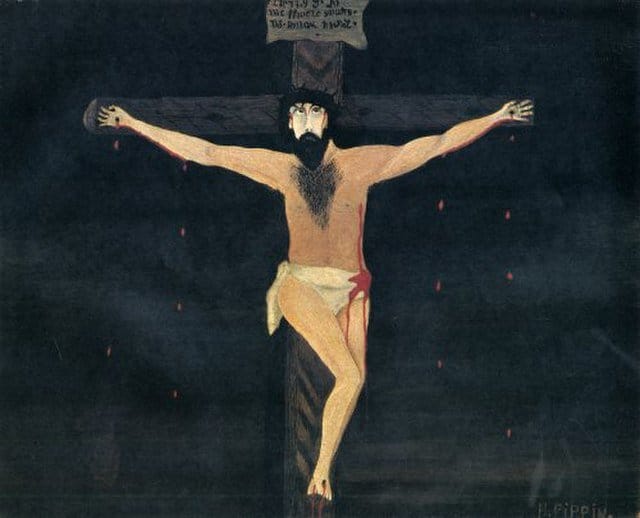 Some of my spiritual reading through Advent, Christmas, Lent and soon Easter has consisted in Morning Light: The Spiritual Journal of Jean Sulivan.

Sulivan was a priest, novelist, and essayist who was given permission to put aside his priestly duties in order to write. He can lean too heavily on the disgruntled cleric side. Not that I don’t do more than my share of complaining, but from the convert side, my side, I’m forever at the back of the church saying, “Lord, Jesus Christ have mercy on me, a sinner,” and “To whom else should we go, Lord?”

Nonetheless, Sulivan, too, loves the Church and recognizes–If you think the Church is bad, survey the world that tries to proceed without it. He can be quite funny. And his core message–not to let “religion” get in the way of actually following Christ–is utterly sound.

You’ll find an excerpt below.

So here we are at the Triduum. I awoke this morning to my own morning light in Tubac, AZ, where I’m staying at the “historic Valley Verde ranch.” The whole area is a birder’s paradise. Yesterday I saw a Gila Woodpecker and a vermilion flycatcher. I also tramped along the Anza Trail, which runs in back of the property, to a nearby park where a guy named Peter, along with another local, Phil, have taken turns sitting out in a field every day, all day, during the month of March in order to count black hawks.

I can hardly think of an activity I could approve of more.

Tuesday I drove to Nogales, AZ, a border town, for noon Mass at the Church of the Sacred Heart. Nogales looked poor-sih on the one hand. On the other were all these gleaming white Lincoln Continental Navigator SUVs that screamed drug-running and human trafficking prowling the streets. Coming in on Route 19, I spotted a young guy in a hoodie streaking across the highway–who knows whether hunter or huntee–and disappearing, like a rat into its hole, into a hidden crevice in an abutting rock cliff. High above, across the way, sat a lone what I took to be border patrol car.

Later I read up on a little bit of what goes on along the border in the way of crime. Beyond grim, and helpful to contemplate as we move toward Good Friday. In the maze of underground tunnels that have been dug out along and among the sewer lines connecting the U.S. and Mexico, the cops often find a makeshift shrine to the Virgin Mary.

The Gospel that day was the story of Judas, poised to betray Christ: having taken the thirty pieces of silver, dipping his morsel in the same dish. “What you are going to do, do quickly”…”So Judas took the morsel and left at once. And it was night.”

Every once in a while I end up at some strange, random church and hear a homily that makes me sit up straight. The priest at Sacred Heart, in the gentlest possibly way, pointed out that every one of us is exactly like Judas. How many times have we sold him out for thirty pieces of silver–or, for that matter, way less? (After dipping our morsel in the same dish as well, I added to myself; after taking the Eucharist).

“Let’s not waste our time criticizing the Pope and complaining about the Church,” he continued. “Let’s think about making reparation. There’s an idea that’s gone out of fashion and that we should seriously think about taking up again. We don’t even want to make reparation for ourselves, never mind others. But that’s what we’re called to do as members of the Mystical Body. When one part is hurting, we’re all hurting”…

I thought about that yesterday morning as I took the back way, along the Anza Trail, and walked to 9 am Mass at St. Ann’s, the rustic little local Catholic church, with the birds. That, too, was wonderful: 20 of us or so. A priest from I’m guessing Africa with a beautiful lilting accent. We heard Matthew’s version of the Last Supper: “Surely it is not I, Lord, who will betray you.” “You have said so.”

Today I’ll drive into Tucson, set up shop in my next temporary nest, and attend the 7 pm Holy Thursday service at the Cathedral of St. Augustine, which is within walking distance of where I’m staying.

I may have found a house to rent–waiting for a timeline for repairs to kitchen cabinets etc and then I hope will sign lease. So half my head is on Christ and the other half is full of details about switching cell phone carriers, setting up wifi, renting a postal box, and the alarming eating habits of javelinas.

The javelina is an outlandish animal with a neck the exact same girth as its waist, who resembles an Edward Gorey creation, and whose favorite food, to impart an idea of its personality, is the prickly pear cactus. The javelina, however, is not fussy, and it turns out also enjoys devouring succulents which comprise about 80% of the lovingly-tended plants I had planned upon bringing with me. As well, let’s just say I’m glad I don’t own a dog.

Beneath all that, I’m scared–of moving from LA after 30 years, of so many goodbyes, or the way time passes so so quickly. Oh Lord, I’m not finished. I’m going to die unfinished! Will I have left anything behind besides this worn-out body? The desk in my airbnb is right across from a double mirrored sliding door so for three days I’ve been face to face with: Yikes. I really am old. Well, that’s the deal. Either you die “young” or you receive the gift of age, which as many have noted, is its own kind of Calvary.

And is thus a perfect entree into the Triduum.

“If one wants to distinguish, there are two layers in the Gospels. On one hand, there is a rejection of all conformism, an invitation to awareness communicated by a boldness of tone. On the other hand there is love and the community of sharing whose perceptible sign is bread and wine–the Eucharist–which is both death and resurrection.

If love is not to be reduced to a new formalism or community to ritual while pretending to overcome divisions of money, class, and race, they have to avoid ideology and sentimentalism, which means that they must begin to be fulfilled. Otherwise, in spite of all good intentions, love and ritual become only more examples of inertia, made worse by fakery. To believe that love can be intellectualized and made as obligatory as ritual, that people can be taught about a community of sharing in abstract terms, is to open the way to all sorts of illusions.

Don’t cut corners. The Gospel is not made to dominate the world. It’s the grain of sand that upsets the world’s machinery. One can’t inhale its fragrance and be content to leave everything the way it is.

Despite superficial adjustments, Jesus is still crushed under the weight of ideological shackles and worldly-minded hierarchies, just as he was crushed under the cross. Emperors are no longer crowned or deposed in his name but in too many countries he remains the symbol of social and political immobility.

There is a danger in thinking about glorification.

Glorification always ends up in the system–in power. But Jesus’ message is the opposite of power, turning respect adn judgment upside down, as in the Magnificat.

The illusion was this: Because revelation ended in glory [which one believes in the obscurity of faith], glory was spread over the whole adventure before the right time had arrived, so we then tried to impose the order of glory in morality and politics. Despite denials, this illusion persists in many minds. Just as Jesus, insofar as we can imagine him in human terms, did not know everything and experienced genuine agony, we too can only live in the darkness of expectation, even though the darkness is luminous. There is always a danger in exploiting faith as a form of human knowledge.

There’s not point in proclaiming an abstract certitude, whether the virginity of Mary or the resurrection of Jesus. They can only exist in us as an infinitely discreet light. Truth waits for dawn in the gleam of a candle. Proclamations are attempts to install ourselves in a rigid order of glory. But it’s the poverty and pain that men and women undergo which contains the seeds of Jesus’ glory.

Don’t fool yourself. When the soldiers took off his clothes and covered him with a scarlet cloak before putting a crown of thorns on his head and a reed in his right hand, crying, ‘Hail, king of the Jews,’ they were enacting the ultimate truth of all time.

What is ridiculous is to see crowds come together and sing the Credo, some making claims in the name of the past, others in the name of the future, always with the same hunger for miracles. Jesus’ whole effort is to lead each of us back to his or her own center, where decisions are made.”