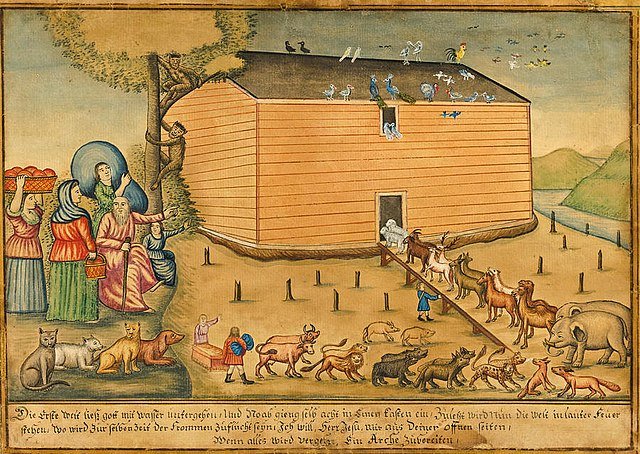 The Skirball Cultural Center, a bit north of the Getty Center on the east side of the 405, is an LA educational institution, “devoted to sustaining Jewish heritage and American democratic ideals.” And they’ve just launched “Noah’s Ark at the Skirball™: The Art of Imagination.”

The digital program comprises a suite of virtual programs and educational resources, all absolutely free, developed for Pre-K through Grade 5 distance learning.

The brick-and-mortar Noah’s Ark installation has been open since 2007, drawing approximately a million visitors from around the world. The challenges of remote instruction spurred the pivot to digital, making the message and meaning of Noah’s Ark now available nationwide and even abroad.   Features include streaming videos and interactive lesson plans, virtual field trips facilitated by Noah’s Ark educators, and online professional development courses focused on arts integration.

I was eager to learn just how deeply into the Genesis story the Skirball goes. Do they let the little tykes know that God was so frustrated with mankind that he was sorry he’d created us? And that the Ark was actually a grudging alternative to wiping animals and the human race out entirely?

I actually think such bracing truth is good for children—an approach that perhaps explains why I never became a mother.

Turns out, at any rate, that the idea is more to use Noah’s Ark as an archetypal flood story upon which to hang the idea of the disasters that come upon every human being. Storms, arks and rainbows are the watchwords.

The Curriculum begins with a “Welcome to Noah’s Ark” video (available on the Skirball’s YouTube channel) that introduces the core flood tale message: “that everyone, including the youngest members of the community, can make a difference in the world.”

Flood stories occur across cultures and traditions. The children can watch versions told, for example, by the Maasai, a group of people from Kenya and Tanzania; and by the Lenape, an indigenous people of the northeastern woodlands of Canada and the U.S.

“Live storytelling lies at the heart of the on-site experience,” explains Rachel Stark, the Skirball’s Director of Education.

Language Arts and Visual Arts lessons emphasize the key values of Noah’s Ark: welcoming the stranger, taking care of the world and one another, and learning how to serve the community.

Virtual field trips, led by Noah’s Ark educators, take place in Zoom classrooms in which children are encouraged to participate in storytelling, closely observe their surroundings, and engage in art-making and creative storytelling.

Free lesson plans are available for download, and the Skirball even offers a series of virtual teacher training workshops.

Says Stark: “The idea is that each of us is Noah. Each of us is responsible for building a better world. We all want to draw on the strength of community, find our way to safe shelter, and orient towards hope.”

Children and adults alike are invited to imaginatively interact. People can spin the wind-turbine zebra and touch the elephant and immerse themselves in the storm gallery.

Some calamities consist in real-life storms. Then there are metaphorical storms in our lives. Where do we seek shelter, find home, seek the helpers?

The Skirball has served mostly public schools, but Catholic schools have always been a regular audience as well, especially for Noah’s Ark. “The message is that everyone’s story is valued, so we can look for the areas of commonality and also celebrate the differences. Everyone is useful and needed in some important way.”

In the Lenape video, for example, “the message is that even though you may be small, you can make a difference. It features a muskrat who says, ‘I can do it!’ Young people, who are suffering right now from isolation and uncertainty, can be the change-makers. We’re trying to offer them the tools to express themselves. Interview a family member, we invite them. Record your story. Reflect on your process.”

The children have responded strongly and with excitement. Many have been mesmerized by the animals, choosing their own favorite. They’ve spoken about the sounds they heard and how the storytellers took them on a journey. Some have turned on the video feature and allowed themselves to be seen on Zoom for the first time.

So check out “Noah’s Ark at the Skirball: The Art of Imagination.”

Because we’re all Noah. And what’s maybe more important: we’re all that little muskrat.

One Reply to “NOAH’S ARK AT THE SKIRBALL”