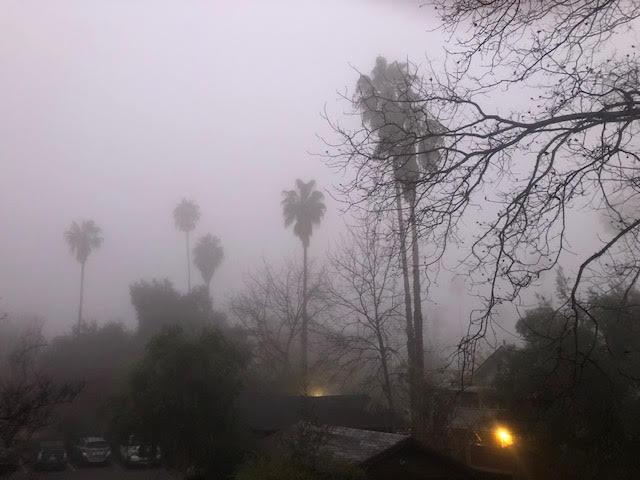 POST-RAIN DAWN, FROM MY BALCONY. HE WHO SEEKS BEAUTY WILL FIND IT!

I have never much kept up with Catholic “politics,” if that’s the word. I depend upon Always Forward, from our own Angelus, for daily news of the Catholic world.

And I read one blog: Neal Obstat, faithfully maintained by the wonderful Dr. Tom Neal, husband, father, and Professor of Spiritual Theology at Notre Dame Seminary Graduate School of Theology in New Orleans.

In a recent post. Dr. Neal wrote of his conscious choice to avoid being a “controversialist.” I couldn’t agree more.

That doesn’t mean you never say things with which people disagree. It means you don’t make a career, in or out of the Church, out of being a provocateur and a hater.

I was once graced to attend Mass with Tom, his wife Patti, one of his daughters, and the one and only Austin Ashcraft, a dear friend and teacher of Catholic high school boys who introduced me to Tom in the first place. We broke bread over a crazy delicious NO meal afterward, outside on the sidewalk, and I fell in love with the whole lot of them.

Anyway, Tom often offers a story or bit of wisdom or a reflection or an insight that you can really chew on and use. Just in the past week, he’s issued an invitation to pray as if we mean it, wondered why we so seldom, if ever, confess to our bad driving habits, and re-posted one of my all-time favorite: “All Rind, No Meat.”

In that piece, he describes a guy who’s talking to his confessor and has all these very deep insights about his very elevated prayer. The priest listens patiently and after a while says, “Unh-huh. So how’s it going with that sibling of yours to who you haven’t spoken in months?”

I have always felt this kind of incredibly useful reflection to be at the heart of Catholicism, the Gospels, and our relationship with Christ. This effort to know ourselves, to see ourselves clearly–in order both to use our gifts and to work ever more toward learning to love one another as he loved us, and our neighbor as ourselves—is the very point of our ongoing conversion.

What good is our prayer, our doctrines, and even the Sacraments if they don’t break us open and challenge us to love the most difficult of our friends, families and neighbors?

Being conversant with every last abuse scandal, attacking the current Pope, or currying favor with the “movers and shakers” of the Catholic world (itself a contradiction in terms: our only mover and shaker is Christ, nailed to the Cross) are tacked-on trappings that, unless you happen to count a bishop or whoever as a dear friend over and above the mere office, are simply irrelevant to a life of faith.

For my own part, I sometimes joke that I have 200 readers and know each of the personally, which is not far from the truth. It’s not unusual, for example, for someone to sign up for one of my Writing Workshops, and the next day to ask for my prayers on behalf of a depressed colleague, sick relative, or confused child.

My goal is to invite people to seek truth, goodness, and beauty. I have zero interest in debating or arguing or making a “point” and thus simply block anyone on social media who makes a wilfully argumentative or asinine remark.

One branch of the arbiters of Catholic culture consists in just such haters, naysayers, complainers, and snitches: people who have succumbed to the temptation to solicit the maximum number of hits and likes by fomenting controversy.

Another branch comprises Catholic “personalities”: people who host “upbeat” afternoon talk shows, post flirty conversations that supposedly happened between them and Jesus in prayer, and hawk their Catholic-empire DVDs, T-shirts, and coffee mugs.

Christ never contrived to be controversial: he was controversial because his actions and words, his absolute fidelity to the Father, his conscience and his heart by definition subverted every worldly system.

I’m always struck by the times he told the people he’d just healed not to tell anyone: the polar opposite of social media, where we sometimes willingly, wantonly prostitute our integrity—both individually and collectively—for the sake of clicks and hits.

Could it be that the fewer people who know about us, the better?

Whatever the case, if we’re going to spend time in front of a screen, let’s make it be to read material of substance and quality, like Dr. Tom Neal’s.

Better yet–why not make our goal this Lent, two or three days a week, to set aside an hour and get away from the screens altogether? Why not view Lent as an opportunity, as often as we can, to seek out the nearest open church, drive or walk there, and go inside to sit, in awe, trembling and silence, before the Blessed Sacrament?

We want to invite the following of a Person, not a personality.

13 Replies to “THE PROBLEM WITH CONTRIVING TO BE CONTROVERSIAL”