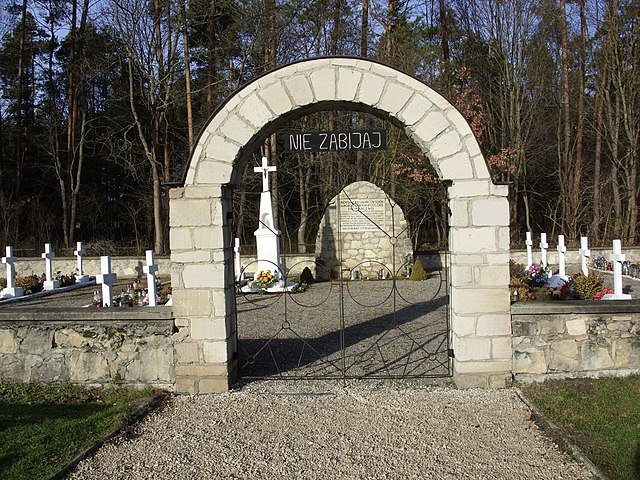 GATE WITH THE INSCRIPTION FROM THE DECALOGUE "5. THOU SHALT NOT KILL". CEMETERY OF POLISH VICTIMS OF THE GERMAN MASSACRE IN SOCHY FROM JUNE 1, 1943

The world revolves; the Cross stands still. I don’t know Latin, but that’s the rough translation of the motto of the Carthusian order (Stat crux dum volvitur orbis). I’ve thought of it often these past weeks.

Things are happening in our world, nation, state and city at such a dizzying pace that processing is difficult. “I protest!” I have wanted to say, at just about every turn. But to post, for example, on social media is simply to invite a firestorm of invective and argument, which moves nothing forward. Do I want to be part of the problem or part of the solution?

The execution on January 13 of Lisa Montgomery, the first woman to be put to death in federal prison since 1953 and a kind of swan song for the outgoing administration, struck me as especially emblematic of our spiritual corruption: the apotheosis of the chaos, lies, violence, God-is-country, and hate-is-love insanity that is now the sea in which we swim.

In the midst of this, I trudge to daily Mass and, partly through the example of friends who long ago incorporated a daily Holy Hour into their lives, and partly through a kind of silent inner call, have been led to sit before the Blessed Sacrament for at least a short time each day. The first day I’d been kneeling before the tabernacle for approximately three minutes when a woman came up with a rolling suitcase, began a lengthy harangue in Spanish, and when I gently replied, “No comprendo, no comprendo,” opened her pack and tried to sell me a pound of butter.

The second time another dear lady, limping badly, laboriously climbed the steps to the altar and began very slowly, very painstakingly, rearranging each of the about 50 crackly foil-wrapped poinsettias that banked the steps.

The third time another lady (we women in particular seem irresistibly drawn to the tabernacle and can hardly restrain ourselves from throwing ourselves upon our beloved Christ: Let ME wash your feet with my hair!), promptly sat down and launched into a loud and what promised to be long call-and-response chaplet or novena or devotion of some arcane kind, thereby, along with her equally fervent friend, nixing any hope of silence.

No matter. That day I went and sat in my car in the parking lot, with the cross on top of the church in full view, the friendly sun beating through the windshield, and had a bit of a Holy Hour there.

In between, I’ve been graced with many interludes of real silence (or as much silence as you can hope for in a good-sized city in which the 210-E is literally adjacent to the church, every other vehicle on the street is chop-shopped, and the mourning, the faithful, the homeless, the crying infants, the people who don’t know how to silence their cell phones, the mentally ill, and the army of cleaners, sweepers, sanitizers, dusters, and rearrangers-of-the-altar are liable to burst in at any moment.

Meanwhile, turns out two of my neighbors, a young couple, are avid birders. They sit out in our backyard garden by the hour with their binoculars and have a fancy app, Sibley Birds v2, with really accurate, detailed, illustrations to aid identification.

The other day, they sent this text:

I myself have also spotted band-tailed pigeons, cedar waxwings, and acorn woodpeckers.

Sometimes I just sit out there and look at the birds and I’m not sure what to think. On the one hand, the birds are so beautiful.

On the other, we live in a country in which it is now a hate crime to refer to a person who was born male as a man.

We live in a nation in which a “patriot,” in many circles, is a person who is ready to murder elected officials

We live in a country in which we just executed a woman who had been abused, physically, emotionally, and sexually, since before her birth. A woman who suffered from fetal alcohol syndrome and PTSD, was mentally ill, had been so tormented by so many people that she had long ago disassociated from reality. She committed a gruesome, bizarre murder. And she was a human being. Her lawyers submitted reams of mitigating material and begged for mercy.

And we killed her.

“Do you have any last words?” they asked Lisa Montgomery.

12 Replies to “ON THE EXECUTION OF LISA MONTGOMERY”