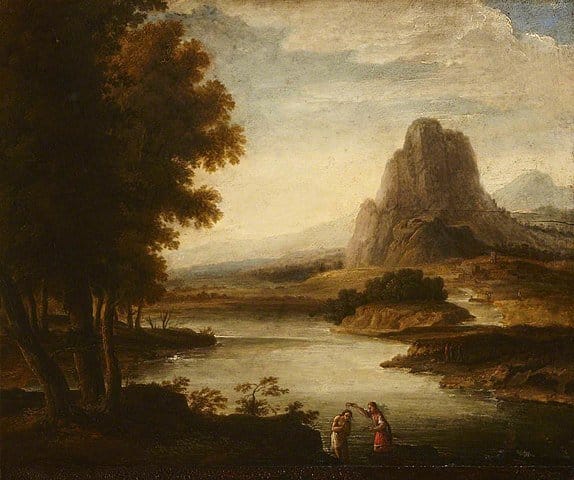 HERMAN VAN SWANEVELT, LANDSCAPE WITH THE BAPTISM OF CHRIST, BETWEEN 1620 AND 1665

Every once in a while I start writing a blog post, and on and on it goes, and I’m not straining but having a bit of fun and I’m just about to post when I realize: “Hey, this is an Angelus column!” Which I agonize about each week and is a source of constant anxiety.

That just happened. Sorry! But I’ll share it here in a couple of weeks.

I wanted to poke my head in anyway, dependent as I am on connecting with my few, and precious, dedicated readers, fellow wonderers and wanderers. (I don’t think I mentioned that I put out the call on Christmas Eve for a little Christmas Day zoom gathering for all who were so moved. One person showed up, our own Bill Potts, and then my friends Tensie and Dennis from Santa Maria signed on I think out of pity. It was PERFECT. THANK YOU).

So let’s see. I was struck this year in a way I never have been before by the fact that the infant Christ is born, the Magi visit, and next week fast-forward 30 years, and John the Baptist is anointing him for his public ministry.

What a strange religion/story, in which Christ’s entire childhood, adolescence and young adulthood are basically shrouded in…not secrecy, exactly. But they’re hidden, shielded from view. I guess no-one but maybe Mary knew he was the Messiah so why document anything or pay particular attention?

“I am not fit to untie the thong of his sandal”…a foot reference…water…the Baptism is a kind of reverse mirror image of the Last Supper, I’m thinking this year, when Christ warps a towel around his waist and washes the feet of his disciples.

In the first instance, John, the best man, who readily accepts and embraces his servanthood position (“He must increase; I must decrease”) vis-a-vis the bridegroom, anoints Christ for his public ministry. As with Peter at the Last Supper, he sees that it should be the other way around; that by all rights their positions should be reversed. “But so that Scripture may be fulfilled,” says Christ, as he accepts, insists really, that John baptize him. It’s only fitting that Christ, the humblest of men, the Savior who constantly upends every power structure known to man, should be anointed by his “inferior.”

At the Last Supper, he brings things full circle, anointing Peter for his public ministry, by washing the feet of his disciple. Peter is being “baptized”/anointed into martyrdom: he will suffer the same fate John did (if by different means).

“No, Master!” cries Peter, appalled: if anything, he feels, Christ should be asking Peter to wash his feet. But Christ insists: “I no longer call you servants, for a servant does not know his master’s business; I call you friends. Even knowing he is to be tortured and killed that very day, in his extravagant generosity of spirit, he outpours his service and love.

So it seems the two events are bookends of a sort: I’m sure many smarter and more articulate than me have plumbed the connection more deeply. Suffice it to say this is yet another example of the inexhaustible riches and depth of the Gospels.

On another note, I have re-subscribed to the Criterion Channel, a second kind of treasure trove. I thought I’d seen the major classics from the 40s, 50s, and 60s: my favorite era. But a friend last week turned me on to Holiday (1938) with Cary Grant and Katherine Hepburn.

I watched it Sunday morning, in bed, after a horrible night’s sleep and having risen early for 8 am Mass. And it is just stupendous. The little, working man with a dream versus Big Capital; the family member exiled for exhibiting too much spark and joy; a snapshot of New York High Society. Superb dialogue, wonderful acting, sumptuous sets, Edward Everett Horton, and a story line that brought tears to my eyes.

Which isn’t hard these days.

20 Replies to “ORDINARY TIME–BUT IS IT?”