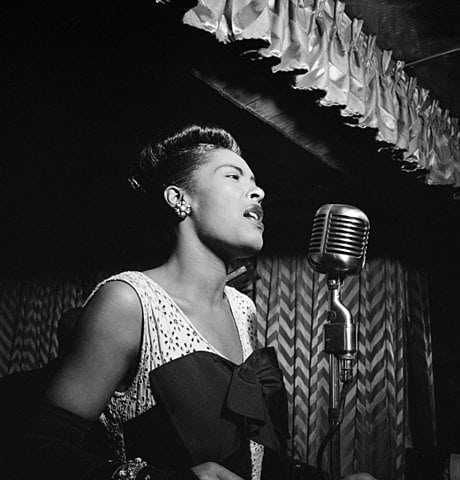 Jazz singer Billie Holiday (1915-1959) continues to fascinate. Her life and work—the way she moved through the world—embodied myriad contradictions

The outlines of her story are well-known: born in Philadelphia to an absent father, shuttled off first to relatives Baltimore, then to Harlem and a mother who ran a “good-time” house. The victim of attempted rape at 11, turning tricks by 14. The fame, the adulation, the boozing, the men, the heroin addiction, the arrests, prison time, and FBI profile. The death in a hospital from cirrhosis, chained to a bed.

A new documentary, Billie, directed by James Erskine, is based on the voluminous notes, transcripts and recorded interviews left behind by journalist and fan Linda Kuehl. After spending upwards of eight years in the 1970s talking to Holiday’s childhood friends, fellow musicians, business managers, and lovers, Kuehl died in 1978, an apparent suicide.

The best part of the film, to my mind, consists in Holiday’s performances: The regal bearing, even when singing of the men who abuse her. The heart-stopping phrasing, the slightly tilted head, the between-the-beat silences, the eyes that challenge and plead, mourn and defy, all at once. Her incredible sense of self, a kind of contained built-on-solid rock integrity that no outside force—no man, no Jim Crow law, no trauma even—could touch or defile.

After watching the documentary, I poked around online and came across Religion Around Billie Holiday (2018), a book that ranges way wider than its title implies.

Author Tracy Fessenden, Professor in the School of Historical, Philosophical, and Religious Studies at Arizona State University, sets forth the social, economic, racial, spiritual, cultural, and musical milieu in which Holiday, née Eleonora Fagan, came up.

Without in any way trying to claim her as a churchgoer, Fessenden reflects on the way that Holiday was almost certainly shaped by the spiritual and religious influence of the years she spent as a young girl at the House of the Good Shepherd for Colored Girls, a kind of Catholic reform school. Here she learned of suffering servants, penitential fallen women, self-abnegation, fasting, mortification: tropes that can shape the adolescent psyche, depending on how they’re presented, either for better or for worse. She also learned the rubrics of faith, Gregorian chant, and liturgical voice, the guiding principle of which was “refinement by restraint.”

“Strange Fruit,” the haunting melody about Southern lynchings that became Holiday’s signature, was apparently conceived by Jewish labor activist and teacher Abel Meerepol. How exactly the melody and lyrics came down is a source of dispute, but what’s indisputable is that Billie Holiday made it her own. She closed every set with the song for years, and to watch her sing it in the documentary raises gooseflesh.

“ ‘Southern trees bear a strange fruit…blood on the leaves and blood at the root,’ ” begins Billie, and the long, mournful melody of the horns, which introduced her, instantly takes on the quality and remembrance of a dirge. ‘Black bodies swinging in the southern breeze, strange fruit hanging from the poplar trees.’ Then there is Sonny Whit[e] on the piano before she takes up again, playing softly as death.

‘Pastoral scene of the gallant South…the bulging eyes and the twisted mouth.’ She sings with a curious lack of emphasis, dropping each word slowly and without accent…

The result is a desperate and dreadful intimacy between hearer and singer. ‘I have been entertaining you,’ she seems to say. ‘Now you just listen to me.’ The polite conventions between race and race are gone.”

But Holiday was no poster child for political correctness. She frequently chose—in fact, sought out—men who abused her physically and emotionally. She was notoriously profligate with money, food, and space, sharing her apartment at times with pimps, prostitutes, addicts. Her fondest wish was to have kids, open a home for orphaned children, and have her own little supper club, maybe 200 seats, where she could feed people and sing.

She was “existentially correct,” as author Michele Wallace has noted. Lady Sings the Blues (1956), her rough autobiography, was the work of author Tom Dufty, who took Holiday’s oral history and crafted a book around it. “Wherever people were lonely, isolated, afflicted,” Dufty observed, “there was Billie Holiday.”

The deep, platonic, love between Holiday and jazz tenor saxophonist great Lester Young is the stuff of legend. If there is a classier, more moving interplay between any two performers in the history of music than that of Holiday and Young in “Fine and Mellow,” recorded for the 1957 television “The Sound of Jazz,” I don’t know of it.

They both died soon after. And once a Catholic, always a Catholic.

Holiday was given the last rites. Her funeral was a Requiem High Mass at St. Paul the Apostle church in Manhattan, attended by over 3000, and with no music other than, according to the New York Post, the “unaccompanied Latin chants of a 10-voice Catholic choir.”

“Afterward, there was such a quietness,” bassist Milt Hinton recalled. “We just stood around like, in awe, and we filed out of the church and stood on the corners for a few minutes…It was just dead quiet and sadness.”

2 Replies to “RELIGION AROUND BILLIE HOLIDAY”