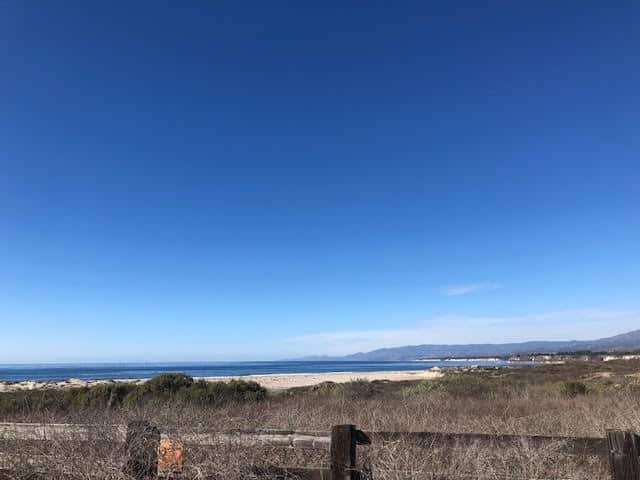 A few weeks ago I drove up the coast to the Coal Oil Point Reserve, a sublime area, lush with sea life and birds, on the edge of the UCSB campus. The reason for the trip was to meet a dear friend—a spiritual companion, a guide, a mentor, though she is 15 years my junior.

Part of the University of California Natural Reserve System, and one of the premiere coastal-strand environments in Southern California, the area comprises a mixture of dune vegetation and rare wildlife. The protection of these natural habitats aims to support research, education, outreach, and stewardship.

My friend and I stood on the bluffs overlooking the water and marveled at the ocean, the incoming waves so smooth their surface had the sheen of syrup. We took our picnic lunch down by the pond (technically Devereux Slough, a seasonally flooded tidal lagoon), spread out a blanket and feasted.

A snowy egret, perched on slender branch, fixed us with an impassive stare. We spotted a Black-Bellied Plover and a Northern Flicker. The Reserve is part of Audubon’s Important Bird Area (IBA), and boasts, among other species, pelicans loons, teal, osprey, larks, grebes.

After lunch, we made our way around the Slough, meandered toward the shore and discovered a series of inviting trails that led along the bluffs south. The winter vegetation spread itself around us in shades of russet, bronze, green-gold, amber. Gulls wheeled overhead. We couldn’t get over the beauty.

At one point we spoke of the ease of getting sucked into the vortex of “doom-scrolling,” to use the current term: actively seeking out bad news, people to despise, reasons to despair of the world.

It was then that my friend passed on a piece of recently-heard wisdom: “We don’t fondle temptation.”

We don’t flirt with or give temptation a foothold. We pass briskly by, giving “the glamor of evil,” the phrase used when we renew our baptismal promises, a wide, wide berth. The glamor of evil can take many forms, often subtle: crowing, lording it over, virtue-signaling, self-righteousness.

We talked about how we’re called to be faithful to a Person, not a person, not an ideology, a political party, an issue, or even a country. Empire is never the primary place to live out our Gospel call.

When the sheep are separated from the goats, is Christ more likely to ask “How did you vote?” or “How did you treat your daughter, your father, your employee, your tenant, your boss, your cleaning lady, your business rival, your manicurist, your neighbor?”

Did you bear your cross with even a smidgen of equanimity?

Madeleine Delbrêl (1904-1964), Catholic French laywoman, journalist, and friend to the poor, put it this way:

“In fact, it is through our small sufferings that we are given a marvelous means of putting the vast expanse of suffering in the world to good use and making it fruitful… Has it ever occurred to us—so fond of news as we are and so swift at interpreting it whether with joy or gloom—have we ever thought that the fact of botching a small part of our allotted daily suffering—whether it be by getting up with bad grace in the morning, by turning up our noses at insipid food, or simply by cursing the numbing cold—is of greater significance to the real victory of the world than the current disaster or victory reported on the radio?”

Across the country, on the opposite coast, another woman who loves birds had recently contributed in her own way to that “real victory.”

“A Sick Swan Is Saved After a 23-Mile Odyssey by Foot, Car and Subway,” read the NYT headline.

Ariel Cordova-Rojas had planned to spend the last day before her 30th birthday at the Jamaica Bay Wildlife Refuge in Queens. She rode her bike there but, having trained for five years while working at Manhattan’s Wild Bird Fund rehabilitation center, quickly spotted a female mute swan who seemed to be ill.

“If there’s an animal in need,” she later noted, “I’m going to do whatever I can.” So she walked the 17-pound bird a mile back to her bike, begged a ride from a pair of strangers, rode the A train with her bike and the swan to Brooklyn, begged more help, and after two more rides, at last delivered her charge to the Wild Bird Fund on Manhattan’s Upper West Side.

Who’s to say that Cordova-Rojas’ selfless rescue of a mute swan didn’t weigh more in the scale of the world than that day’s White House palace intrigue or the debate du jour over whether to wear masks?

May the words of this splendid young woman resound as we ring in 2021: “That was kind of the perfect culmination of my 20s. It was the perfect birthday present to be in nature and be able to save a life.”