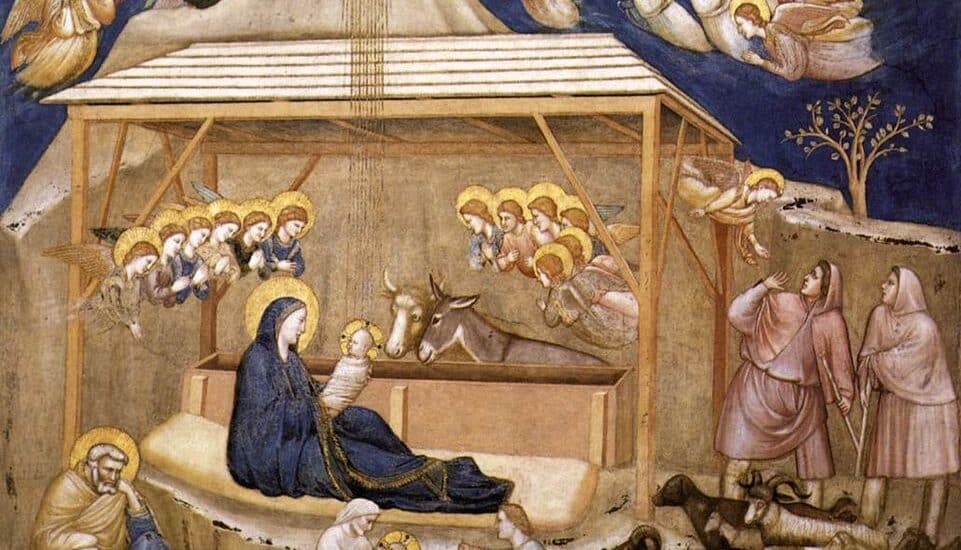 Advent, as always, has been packed with emotion.

I become over-excited, awaiting the birth of the Christ child so eagerly that my sleep is thrown off.

With Daylight Savings Time, my circadian rhythm naturally leans more toward both early nights and early mornings. I love waking in the dark, lighting the beeswax candles, opening the door of that day’s Advent calendar, pondering that day’s liturgy. The readings are to my mind the most beautiful of the year, both for Mass and the Divine Office, and then there are the hymns, the O antiphons, the prayers to Mary.

I took another week-long road trip to Tucson early in December–here in Pasadena, we’d at least been having outdoor Mass, but COVID this time around had closed the churches in Tucson. Only registered parishioners could attend. So I’d wake at 4 am in my cold airbnb (the space heater just didn’t cut it), pray the Office, and at 5:20 (7:20 Eastern) join the monks at Portsmouth (Rhode Island) Abbey for their livestream Mass.

It’s impossible to describe how moving and meaningful I found this.

Back home, we continued with our outdoor morning Mass, which was not horrible if you remembered to bundle up. The church had been closed for months and you’d see the fervent Latinas kneeling outside with their foreheads pressed against the door, longing to be close to the tabernacle, the altar. We all did the best we could and, as always, I pondered the mystery of who is drawn to Mass and why.

Older single women who trudge there each day; parents with two, three, four little children (how do they do it?); Millard, who is in his 90s; the homeless guys: Charles, Shadrach, and a few others who don’t care to share their names. People in scrubs: nurses, health care workers. Old men. The cold-faced lady with the black mantilla. The thirtyish woman who stopped me one morning to introduce herself and it turns out is a public defender in downtown LA who I gather ends up donating money to a fair share of her clients.

And then one morning last week, after months, the tall, wrought iron filigree doors of the church were miraculously thrown wide open. At last, we could approach! (Masked of course, way distanced (Catholics don’t like to be near each other at the best of times, as a friend and I laughed recently), and since the sanctuary holds 1200 and is probably five stories high, with minimal risk of contagion). The altar was decked with bunched cloth-of-gold, balsam wreaths, banks of poinsettias, the Advent candles, and a crèche complete with ox, ass, bales of real hay, Mary and Joseph kneeling, and a place on the burlap for the baby who will not appear till tonight–Christmas eve. O Holy Night.

I’m sometimes informed, “Church isn’t just at Mass,” as if attendance at Mass were emblematic of a provincial contracting, a close-minded rigidity, a narrowing of one’s world view, a clinging to empty ritual accompanied by a turning of one’s back on the “real world” and its people.

I always want to respond, “Duh. Mass consecrates all of reality.” You go to Mass to kneel before the Sinless Victim who took the whole frightful, ghastly crisis of the world–which is to say, of all of us–upon himself–all the darkness, all the hatred, the real narrowness, the ideology, the hostility to story, the sneering, the sophisticated, those who pride themselves on being “above” or “beyond” miracles, magic, fairy tales, the birth of a baby.

Can the human mind ever, possibly, wrap itself around the stupendous miracle of God consenting to take on human flesh and come into the world as a baby? You couldn’t make this stuff up which, as C.S. Lewis observed, is why Christianity is in some weird way believable: It has just that “queer twist to it that real things have.”

Anyway, I have donned my Madonna-blue tank top, not that anyone will be able to see it beneath my layers of drab-green outerwear. I have shared some of the crazy generosity that’s been showered on me with my parish, the homeless guys, my Guatemalan sponsee Josue Gilberto, and some other people. I have opened all the Advent calendar doors.

I have ordered a rib-eye steak with the Cheesecake Factory gift card I received yesterday. That’s right. I rarely eat meat, and steak almost never (I don’t know how to cook it) but I have ordered myself a steak, medium rare, with mashed potatoes and green beans (the sole options), which I will pick up after the 6 pm Vigil Mass and eat, alone, with the candles lit and Bach’s Christmas Oratorio playing in the background.

Then I’m going to watch what looks like a fairly corny 1954 movie called The Holly and the Ivy, and play some carols on the piano, and pray Compline, and probably be in bed by 10.

Meanwhile I have heard from, received gifts from, exchanged emails with, and nattered on the phone and/or zoom with any number of blessed friends and acquaintances this week. While also guarding my energy, heart, and prayer time.

But tomorrow is Christmas Day. We have made it through these past months, somehow, limping a bit by now, but still: made it through a pandemic, civil unrest, a contentious Presidential election, wildfires for many of us, closed churches, uncertainty and angst on a scale new for us Westerners, the sickness and deaths of loved ones. Temptations to act out in various ways. Our own fevered psyches.

But we have made it. So wishing one and all peace, love and joy on this Holiest of Holy Nights, and a very Merry Christmas.