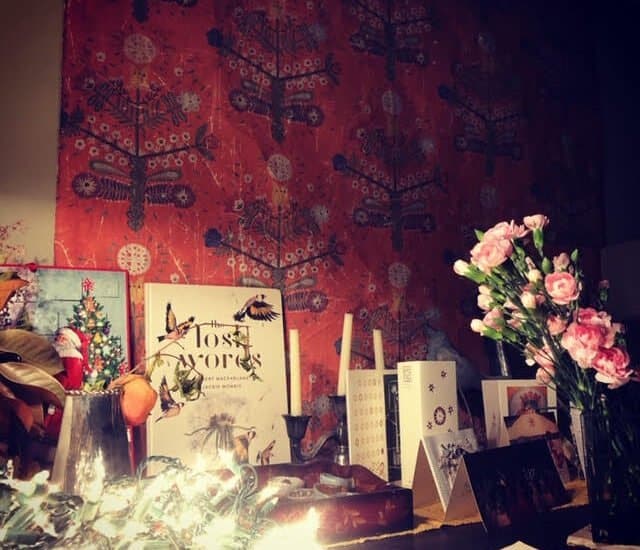 THE SCENE FROM MY PRAYER CORNER

Advent is here: my absolute favorite liturgical season. A secret, hallowed, magical time. I have many candles, Christmas bulbs, and string lights: all must be lit each morning in the dark, along with a stick of incense, for the opening of that day’s “door” on the TWO Advent calendars.

The dark blue Advent breviary has taken its place beside the December Magnficat, Al-Anon’s Courage to Change, Oswald Chambers’ My Utmost for His Highest, Robert Ellsberg’s All Saints (a new addition), and the Rule of St. Benedict.

Is that too much for morning prayer? Then I like to do 10 or so minutes of lectio, write in my journal, and then just sit quietly, BASKING IN WONDER AND GRATITUDE.

After that I get my lunch together, shower, haul the two buckets of graywater I save each morning out to the garden, along with the compost, make my bed, wash the dishes, pack up my work, books, laptop (for at 9 I’ll go to my writing studio), make sure I have my mask, phone, keys, lipstick, sunglasses, and credit card, and drive down the street to Mass.

We’re having it outdoors and boy, am I grateful that we are having it anywhere. Yesterday during his homily, Father bashed the lukewarm laggards who have fallen by the wayside, who have stopped attending Mass just because it’s COLD OUT, a little harangue that thereby encouraged us, among other things, to spy on, rat out, and judge our neighbors.

WE are the members of the faithful. WE will be admitted to heaven when we say “Lord, Lord.”

Behind my mask, I snorted. No disrespect to Father (who has stalwartly brought us Mass throughout COVID and is freezing his own tail off up there, and also knows tons of hymns by heart, and sings beautifully, and generally prepares a solid, sometimes thought-provoking homily, and is always on time, and runs, basically to our benefit, a very tight ship), but I wanted to say, Are you kidding me? Personally, I’ve never been able to believe the Church lets the likes of me in.

I keep thinking of Fr. Walter Ciszek, who said clandestine Masses in the woods, under penalty of death, as a prisoner in Siberia. “[T]hese men would actually fast all day long and do exhausting physical labor without a bite to eat since dinner the evening before, just to be able to receive the Holy Eucharist—that was how much the Sacrament meant to them in this otherwise God-forsaken place.”

I ponder the mystery of why the poor seem to complain so little while we, who live like pashas, bitch and moan over every tiny thing. This morning at Mass this old homeless guy in no hat and a thin overcoat was sitting beside me. I’d seen him shuffling laboriously down the street, dragging his dingy frayed suitcase, the day before. After the dismissal, Father launched into “How Great Thou Art” and the guy chimed in, singing harmony in the richest, most beatific voice.

Indeed. This guy with broken-down shoes and a flimsy coat who can barely walk singing like an angel, that I should be present, counted worthy to be in his presence. NO need to congratulate me for coming to Mass.

“Basically the mystery of the cross isn’t a mystery of strength but a mystery of helplessness. It is a victory to be sure, but a victory hidden even form the eyes of the victor, a victory having every appearance and all the taste of defeat, and experienced as a defeat.

The cross isn’t the mystery of bravery but a mystery of love. It doesn’t consist in suffering courageously, nor merely in suffering, full stop, but in being afraid of suffering; it doesn’t consist in overcoming an obstacle but in being crushed by it; not in being strong and noble hearted but in being small and absurd in one’s own eyes; not in deploying virtue but in seeing all one’s virtues routed and pulverised; and in accepting all this lovingly. And in accepting lovingly to be strengthless; strength is no use, love is what’s needed.

So we shan’t reach the goal by gritting our teeth since, if we are capable of gritting our teeth, this means that we are strong, and all the while we are strong- with this kind of strength- we still don’t know what the cross is all about. Christ didn’t grit his teeth to go to his Passion, he didn’t pluck up his courage, he knew very well that he couldn’t. He merely said: Father, your will be done, not mine, which is something of a different order, of a different world, the world of love. And not merely the love of the human sort, but a love commensurate with God, of God’s sort, that is to say, love of a sort we can never produce of ourselves. This sort of love isn’t ours to give. God has to breathe it into us, he has to come into us to love himself.”

12 Replies to “NOT GRITTING MY TEETH!”