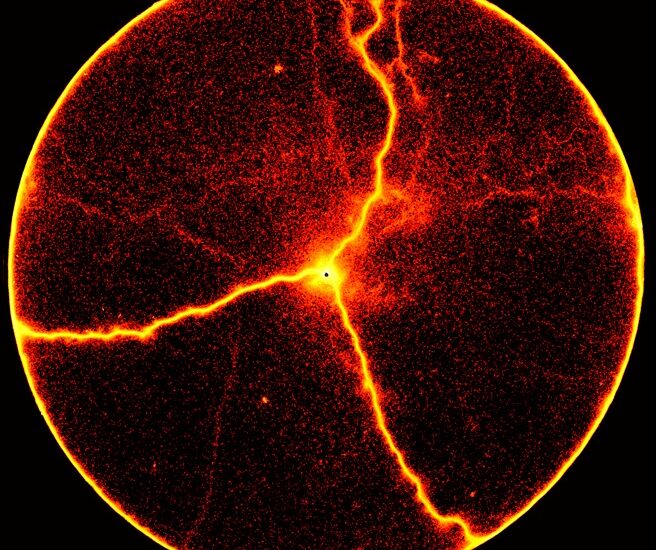 VISUALIZATION OF AN ANT TRAIL PATTERN
The pattern in the figure was produced by a colony of Argentine ants after one hour of exploration of an empty arena. Many ant species form similar dendritic patterns around their nests, but the patterns are invisible to the human eye as they are composed of extremely low concentrations of chemicals (pheromones). In this image, the structure of the trails and the intensity of pheromone marking are made visible from the positions of the ants. Courtesy Wikimedia Commons.

“We come into this world with sealed orders.”
—Søren Kierkegaard

Desire lines or paths are the names given by urban planners to what happens when one person’s impulsive shortcut encourages others to follow, creating informal, unmapped channels through a city.

Desire lines have been called “free-will ways,” “cow paths, pirate paths, social trails, kemonomichi (beast trails), chemins de l’âne (donkey paths), Olifantenpad (elephant trails),” “Paths that have Made Themselves,” “a record of civil disobedience,” and “beautiful, poetic marks of democracy.” They “indicate [the] yearning” of those wishing to walk…of giving feedback with our feet.”

Artists make desire lines from their hearts to their easels and stages and desks. Christ’s walk to Calvary is the über Desire Line: both a “shortcut” and the road from—and to—infinity.

Our culture, by contrast, encourages us to stay within safe, strictly-prescribed lines that have a predictable beginning and a predictable end.

How many of us experience “travel,” for example, by taking an uber from the airport to an air-conditioned hotel, boarding an American-run tour bus, following a prescribed itinerary from which we depart in not the slightest particular, then taking an uber back to the airport?

What about a throw-caution-to-the-winds walk? Have we no curiosity? Do our hearts not long to venture out into the streets and see how people live in this strange city we’re visiting? Have we so little imagination that we no longer yearn to see the sky, a river, a dicey neighborhood, a hidden garden, a mom-and-pop bakery, an argument?

Of course failing to venture outside of a carefully-defined bubble of comfort and security is hardly peculiar to Catholics.

The Danish philosopher and theologian Soren Kierkegaard defined a saint as the person who “wills the one thing.”

What if sin, then—“missing the mark”—consists not just in lying, cheating, stealing, adultery but in closing our ears to the call of our hearts? In refusing to forego even the slightest amount of comfort and “security?” In allowing ourselves to remain in bondage to family systems, peer pressure, cultural conditioning, and our narcotic society? What if the worst sin consists in missing the mark of our lives: what we were meant to be, what we long to be, what we were made for?

Don’t worry that there won’t be enough money: if we do the footwork, God will provide.  “Store up your treasure in heaven,” Christ says, “for where your treasure is, there also will you heart be.”

“You ask whether your verses are any good,” the Bohemian-Austrian poet and novelist Rainer Maria Rilke counsels in Letters to a Young Poet. “You ask me. You have asked others before this. You send them to magazines. You compare them with other poems…I beg you to stop doing that sort of thing. You are looking outside, and that is what you should most avoid right now. No one can advise or help you—no one. There is only one thing you should do. Go into yourself…This most of all: ask yourself in the most silent hour of your night: must I write?…And…if this answer rings out in assent, if you meet this solemn question with a strong, simple ‘I must,’ then build your life in accordance with this necessity; your whole life, even into its humblest and most indifferent hour, must become a sign and witness to this impulse.”

Is not this call to look inside ourselves, in Catholic terms, an invitation to pray?

Must not the priest, the nun, the saint, the martyr, ask themselves a variation of this same question?

Did not Christ, in the Garden of Gethsemane, ask “Father, if you are willing, take this cup away from me; still, not my will but yours be done.” (Luke 22:42).

To that end, I’m offering a half-day zoom workshop on Saturday, December 5, that will explore the concept of Desire Lines. (You can find it under the Workshops tab of my website, heather-king.com).

We’ll contemplate the fact that “discipline” and “disciple” have the same etymological roots. We’ll explore the rigors of “the habit of being” exemplified by Catholic novelist and short story writer Flannery O’Connor.”

We’ll aim to start discovering how Christ explodes into our lives and hearts—if we let Him.

What if, together, we could begin to make new desire lines—for ourselves, for the world?