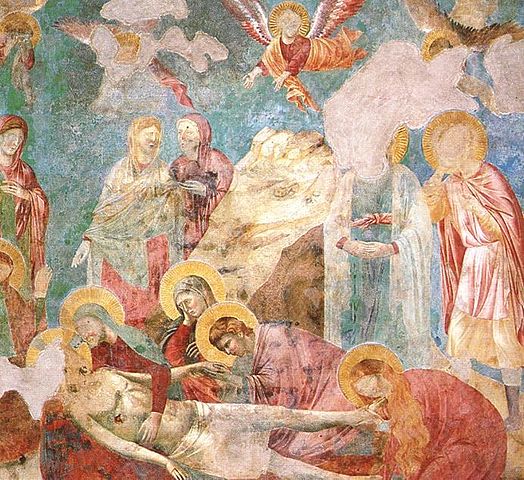 SCENES FROM THE LAMENTATION OF CHRIST, 1290s,
UNKNOWN, FORMERLLY ATTRIBUTED TO GIOTTO

During COVID, I’ve been trying to spend more time in prayer. In particular, I’ve tried to devote fifteen minutes, each day for a week, to meditating on a particular Gospel passage.

The first week the Parable of the Rich Young Man [Matthew 19:16-22] bubbled up from my subconscious. The next week: “An evil and unfaithful generation seeks a sign, but no sign will be given it except the sign of Jonah” [Matthew 16:4]. The third week, unmistakably, the verse that rose to mind was “Blessed are the poor in spirit” from the Sermon on the Mount.

You can’t be a by-the-book, neither right nor left, practicing Catholic without running up against some form of exile, in or out of the Church. Secular friends I sense are baffled by my failure to canvass door-to-door trying to drum up Democratic votes. I’ve been accused by the “woke” of being responsible for hundreds of deaths for my failure to accuse myself of white privilege. Catholic Workers feel anyone worth his or her salt should have done prison time. Right-leaning Catholics are baffled by my failure, in spite of my fidelity to the teachings of the Church on marriage and the family, to take up the “pro-life” banner.

The fact is that a single, childless, celibate woman is an outcast to all.

The fact is I’m not a narcissist but my psychic constitution is such that since birth much of my energy goes toward simply maintaining, managing, controlling, shoring myself up sufficiently to function. I’m organized, conscientious, high-functioning, and hard-working. I’m also an extreme introvert. Noise is a scourge. Too much talk drains me.

Thus, I am simply not built for family life. Not because I’m selfish, but because I’m constitutionally unsuited.

Neither am I an empire builder. If I were a better organizer, leader, commander of attention, I, too, perhaps would be thinking, “My God, we need to get the right person in the White House, the right laws passed. Let’s get on with the important work: Nuclear disarmament. The abolition of the death penalty. Immigration.”

All of that is important work. It’s just not my primary work.

For decades I have wept, interceded, and prayed ceaselessly for my family. Not only have they not been converted: to many of them, I’m a poseur and a crank.

This is why I’ve taken St. Thérèse of Lisieux—“My Vocation is Love!”—as my patron saint. St. Teresa of Calcutta observed, “We can do no great things, only small things with great love.” But Mother Teresa actually did great things. In her lifetime, the whole world knew her.

St. Therese of Lisieux, during her lifetime, really didn’t do great things. She died as she’d lived, in utter obscurity. Her triumphs consisted in refraining from yelling at the klutz nun who splashed laundry water in her face; in training herself not to turn and glare at the annoying nun behind her in chapel; in escorting the crabby old impossible-to-please nun to the refectory each night as if she were Christ.

This is the kind of thing that with superhuman effort on my part, and supernatural help from God, I might be capable of at least working toward.

To that end a Catholic friend, father to six and a wealth manager in the Midwest, recently emailed that he was devastated by the death of rock guitarist Eddie van Halen. Knowing I live in Pasadena, he asked if I could go by the house on Las Lunas Drive where his teenage hero had once lived and light a candle, or leave a flower.

I barely knew who Eddie van Halen was, but I sympathized entirely with my friend’s heart.

So I made a little home-made card, and baggied up a votive candle and matches, and cut a spray of oleander from a bush in my side yard. Then, after finishing work that day, I made my way to Eddie’s former address and placed my friend’s vicarious offering on the sidewalk, among the many other showier bouquets and larger candles.

Did my little action help change the course of the election, or feed a starving child in India, or save a drunk from the gutter? Did it go toward giving Eddie van Halen’s soul a moment of peace? Maybe not—but then again, who knows?

In The Story of a Soul, St. Thérèse of Lisieux wrote: “The heart of a child does not seek riches and glory (even the glory of heaven). She understands that this glory belongs by right to her brothers, the angels and saints…Astounding works are forbidden to her; she cannot preach the Gospel, shed her blood…she loves in her brothers’ place while they do the fighting. But how will she prove her love since love is proved by works? Well, the little child will strew flowers, she will perfume the royal throne with their sweet scents, and she will sing in her silvery tones the canticle of Love.”

Or as Jesus said: “Blessed are the poor in spirit, for theirs is the kingdom of heaven.”

14 Replies to “BLESSED ARE THE POOR IN SPIRIT”