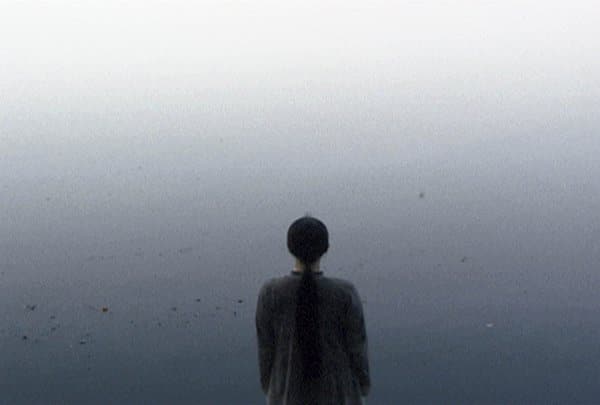 To my mind, a little of “performance art” can often go a very long way.

So when a friend sent me an Art21 video by a Korean-born female artist named Kimsooja, I steeled myself. The adoption of a single name—Michelangelo! Madonna! Prince!—I did not take as a good sign.

Then I watched the video—and was captivated.

“Kimsooja’s videos and installations blur the boundaries between aesthetics and transcendent experience through their use of repetitive actions, meditative practices, and serial forms. In many pieces, everyday actions—such as sewing or doing laundry—become two- and three-dimensional or performative activities.”

The video covers a series of performances—“A Beggar Woman” and “A Homeless Woman”—taped during 2000-2001 in such far-flung cities as Lagos, Mexico City, and Cairo.

For “A Beggar Woman,” Kimsooja sits cross-legged, completely still, one hand outstretched. Her long dark hair is pulled back in a long ponytail. Her clothing is loose and pajama-like. She could almost be a statue. A crowd gathers. People surround her, staring.

Reflecting on watching her own performance in Mexico City, Kimsooja noted, “I was really struck by her posture. She was sitting very tight in a zocalo, a crowded square. Tiny body. Old lady. Totally wrapped within herself.”

She didn’t understand that she was being seen as a real beggar until she noticed a man, standing quite far away for a while, not moving. “And then I immediately felt, This man will give me money.” In the film clip, we see only the torso, lower body and sandalled feet of the man who approaches and deliberately, slowly, almost lovingly places a bill in her hand.  “And then I suddenly felt so vulnerable. I realized I’d become a real beggar. From that moment on, I couldn’t stop crying.”

In “Homeless Woman” Kimsooja lies on her side, motionless, in a crowded Delhi square. Her long shapeless tunic covers her from neck to shin. Again, a crowd gathers, unsure what to do. One woman leans down and tenderly pats her hand, both by way of consolation and of asking—“Are you dead?”

“My body becomes like a stone on the street. I wanted to question within myself what that action really means. Can I be in that lowest position and really feel and understand the position [of the thousands who sleep on the sidewalks in India]?”

Kimsooja was born in 1957 in Taegu, South Korea. She earned a BFA (1980) and MA (1984) from Hong-Ik University, Seoul, and has received numerous prestigious international awards. She has studios in NYC, Seoul and Paris, but is always and forever a nomad: Guatemala, Antwerp, Nara, Japan, Athens, Perth, Liechtenstein, Hong Kong, Madrid, Taipei, Palma.

“For me home is not a physical place but a status of mind. I’ve been wandering around my myself working but wherever I go I feel at home and I find my body as my studio.”

An object central to Kimsooja’s work is the “bottari,” a traditional Korean bed covering that doubles as a kind of swaddling cloth in which to wrap, protect, and carry personal belongings from place to place.

In a 2020 Art Basel YouTube, Kimsooja observes that the bottari, often made from scavenged or anonymously donated clothing, is at once three-dimensional sculpture, painting and object, loaded with meaning. “I believe this approach is immaterial, not saleable in a way, not commercial. It’s in a way like air or water that we breathe and drink and share without having a certain physicality. Art can achieve a memory in the end. Memory of space, time, and personage.”

The work of women—sewing, weaving, doing laundry, wrapping—is at the core of her art. With all that, her work is not consciously “feminist,” but rather belongs to a universal condition of humanity.

For the 2019 inaugural “Traversées” biennale in Poitiers, France, she mounted a site-specific installation consisting of a shipping container painted the colors of obangsaek (the traditional Korean color spectrum of white, black, blue, yellow and red), containing all the personal possessions from her New York apartment.  The container was installed in front of the Cathédrale Saint-Pierre.

Her other work ranges from lighting installations to folding mirror screens, to mixed nationality flags, to collections of clay balls. “Sowing Into Painting” (2020) is a multidimensional project currently installed at Konst, a Southern Sweden cultural foundation on the site of a medieval castle and organic farm.

But it’s “Beggar Woman”—the performance video of that small lone woman, utterly still in the midst of the crowd—that to my  mind poses the deepest question and supplies the deepest answer.

“Art-making for me is to understand myself and the world around me,” says Kimjoosa.

“Especially in this era of disruption and violence, I often feel powerless. But I still believe in art, culture and spirit and truth in the world. That is the oxygen of our lives that enables us to be here and now.”