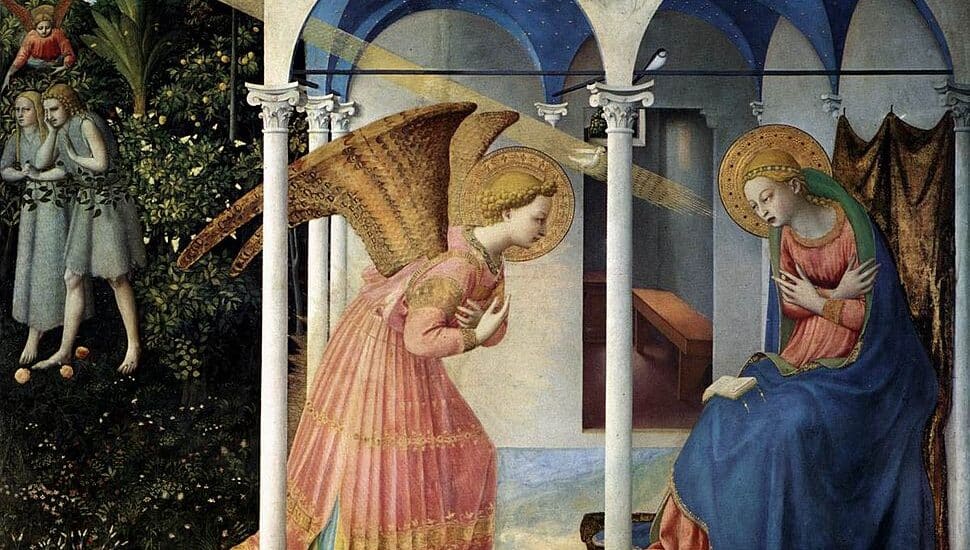 Not long ago I was lunching with a group that included a widowed ex-nun who had been married to an ex-priest.

Her late husband, turned out, had been a professor of philosophy at a Catholic university. “And so,” she mentioned airily at one point, “Greg had the honor of disabusing the young girls of their notion of the Virgin Birth and other such fairy tales.”

“ Poor things,” she added with a someone-has-to-be-the-bearer-of-bad-news shrug. “They probably still haven’t gotten over it.”

I couldn’t have been more shocked if she’d casually admitted to being a cannibal.

To disown the Virgin Birth is to disown the power of sacrament, story, and the world beyond this one. It is to diminish the glory of motherhood and to reduce womanhood to a commodity. It is to be part of the cultural “movement” that increasingly threatens the very identity of the human person.

A religion whose central emblem is the Son of Man nailed to a cross is not a fairy tale. It’s a religion deeply in touch with the reality of the human condition.

If the Crucifixion constituted the whole of our religion, however, we’d be merely pessimists, or masochists. The Crucifixion may be our central emblem but our central belief–the stupendous mystery and miracle upon which we’ve staked our lives–is the Resurrection.

Apropos of miracles, the Catholic apologist G.K Chesterton observed: “The mere fact that a thing happens seldom, under odd circumstances and with no explanation within our knowledge, is no proof that it is against natural law. That would apply to the Siamese twins, or to a new comet, or to radium three years ago.”

In Orthodoxy (1908) Chesterton noted that nineteenth-century Western materialists were “as dull as their coats, as dirty as their streets, as ugly as their trousers, and as stupid as their industrial system.”

What would he think 120 years later, when college professors, journalists, and museum directors can be forced from their posts simply for alluding to the fact that men and women are biologically different?

The Angelus, one of the Church’s most beautiful and tender prayers, records Mary’s response to the annunciation of the angel Gabriel: “Behold the handmaid of the Lord. Let it be done unto me according to Thy word.”

The Trinitarian God operates entirely on freely-given choice and on love. Mary didn’t have to say yes—but she did. And that yes, for the believer, is the foundation on which all further faith is built. It is the yes that ushered in the once-in-cosmic history Virgin Birth, that crowned motherhood for all time, that put the seal of freshness, newness and purity on the birth of every child unto eternity.

Motherhood isn’t our only identity as women, but it’s our deepest. Whether or not we’re biological mothers, in our capacities as sisters, daughters, companions, mentors, workers, and friends, we’re gloriously marked by the ability to receive, patiently endure, nurture, heal, build bridges, quietly contemplate, and console. Whatever our age, demographic or station in life, we’re hard-wired to act with an orientation of heart and a grounding of the body, psyche and spirit that is rooted in the capacity to give birth.

Once motherhood, in its physical and spiritual dimensions, is stripped from the female equation, we’re confused, all of us. What’s left is either woman as purely sexual object, or woman as a commodity of labor, both of which can be bought, traded, exploited, and sold.

This existential error generates lies both inane and monstrous. The fiercely independent woman, the culture insists, aborts her children. Isn’t the fierce woman the one who surrenders her life to the endlessly creative, endlessly astonishing work of motherhood?

The “strong woman” we’re told, succumbs to the advances of a “predatory male,” carries on a seven-year-affair, then sues, claiming rape. Isn’t the strong woman rather the one with a sufficiently secure sense of honesty, fair play, and her own inestimable worth to spot the predatory male and say no in the first place?

Materialists—those who would disabuse young girls of “fairy tales”—purport to throw off the rigid chains of religion. In fact materialism, taken to its logical end,  gives rise to a terrible bondage of self. Our longing for God, left unfulfilled, creates an aching, bottomless void While real injustice goes unaddressed, many in our own culture who have been given every material gift and civil right on earth thus vie for the title of “most oppressed.”

The Eighth Station of the Cross has it that “the women” were the last people Christ spoke to before falling the third time, being stripped of his garments and being nailed to the Cross. “Daughters of Jerusalem, do not weep for me,” he told them; “weep instead for yourselves and for your children” [Luke 23:28].

We are weeping now. In our culture of death, the U.S. fertility rate is at a record low. Children are urged to believe they were born into the wrong body and to surgically and chemically mutilate themselves. Twitter mob thought-police purport to tell us what we can write, who can write it, what we can read, when we’re “allowed” to speak.

Our “cancel” culture, as it’s been called, has a doctrine against—a hatred of—miracles.

Who better to restore that doctrine than women, who carry the evidence for miracles in our wombs? Who better than women to re-elevate truth, goodness, beauty; art, humor, romance;, mercy, communion, freedom and love to their rightful place as our highest ideals?

Women at our best, women at our most essential, women as we were born to be.

Women like Servant of God Adele Dirsyté, who was tortured to death under Communism rather than renounce her faith. Women like Mother Antonia Brenner, who gave up her life as a Beverly Hills socialite, founded a religious order, and went to live alongside the inmates at La Mesa, a notoriously brutal Mexican prison.

Women like novelist Flannery O’Connor and mystic Caryll Houselander and  Servant of God—and of the poor—Dorothy Day. Women like my own mother, who stayed married and faithful for almost fifty years. Who quietly stayed and served, while also being very much her own person, with her own interests and her own inner life.

Women, in other words, who did the impossible, just as the Virgin Birth—by human standards—is impossible.

To do as those women did is no fairy tale.  It is to climb up on the Cross and to be nailed there beside Christ.

At the Sign of Peace, I looked across and saw a young woman with the kind of face that for a minute puts the worst of us right with the world. Solid. Strong. Welcoming. Sure. We gave each other the Wry Smile, the Sense-of-Humor Nod, the little Wave. You bet, sister. Glad you’re here. We love our Jesus.

All through the Eucharist, I thought about how the Body and Blood of Christ fortify us to mother the rest of the world, especially those who are incapable of mothering us: the angry, the conflicted, the transitioning, the lost, the traumatized; the women who have left because they feel the Church diminishes them; the men whose hearts are silently hemorrhaging; the children suffering the burdens of capitalism, consumerism, and technology who simply long, like all of us, to be seen, heard, held.

Afterward I gave my sister-in-Christ one last look—for courage, for strength.

Then the two of us silently shouldered our respective crosses, went our separate ways, and against all reason, all odds, all poor souls blind to the mystery of overshadowing angels, walked out to the streets of Los Angeles with our hearts beating: Yes. Yes. Yes. 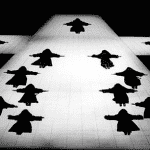