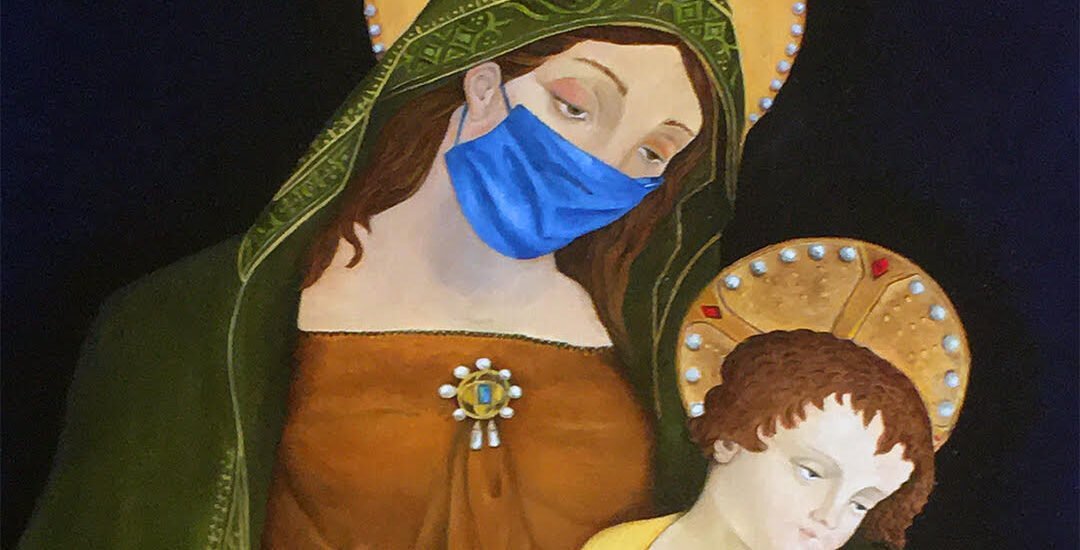 San Francisco Bay area-based artist Mel Ahlborn has a history of reworking Renaissance Madonnas and pairing them with contemporary elements.

Her series “Modern Love: Intercess and Wait” comprises six Blessed Virgins in the icon style, each addressing a contemporary health concern: Addiction Madonna, Alzheimer’s and Dementia Madonna, and so on.

“As an art student, one way you learn art is by copying Old Masters. But you change something. You’re not just imitating.”

In “Addiction Madonna,” based on a 1480 work by Andrea Mantegna, the green button on the infant Christ’s tunic is actually an Oxycontin pill. In “Pandemic Madonna,” her newest offering, Mary wears a mask.

“A part of me is afraid that someone would look at the paintings and say ‘Heretic!’ Could anyone think I’m trying to parody the Blessed Mother, or trying to coopt a sacred image for a quick ‘Wow’? That’s not my intent at all.”

Instead she asks: “What might Christian iconography look like if it were drawn from a universal human vocabulary that does not depend on traditional Christian imagery?”

“The series really represents my personal desperate questioning. What can create those touchstones for people today–representations that come with an education for the faithful and point to what is beyond? The viewer’s experience as it relates to spiritual formation is what interests me and has interested me since I was a little girl.”

Ahlborn grew up in New Jersey and at a grade school daily Mass, had an encounter. “I prayed in front of a painting of Mary. It was not a beautiful painting. But I still prayed in front of that painting and there was actually a response. I felt heard. I felt different. I felt touched.  I was 8 years old. Even today I have tears in my eyes recalling that moment. The Latin, the dim church, the pre-Vatican II rite—there’s a beauty in that mystery that I miss.”

After being educated by Dominicans through high school, Ahlborn earned undergraduate degrees in chemistry and Classics. Always, though, she had an underlying passion for art. While studying in England, she immersed herself in Roman-era wall paintings at York Minster. She studied calligraphy in LA, and learned manuscript illumination.

She’s since worked with the Getty and the Fine Arts Museums of San Francisco. While teaching manuscript illumination at Berkeley’s Graduate Theological Union, she proposed a course in Visio Divina—the visual counterpart of Lectio Divina.

Teaching students ranging from Catholic priests to Buddhist practitioners to laypeople how to use an image in order to enter into a deeper understanding of the Gospels and prayer turned out to be a very popular course.

She then studied drawing and painting for a year at the Academy of Art University in San Francisco, all the while maintaining a successful career in commercial art.

Around ten years ago, she started painting the Madonnas

“People today are longing but they don’t know what they’re longing for. Religious symbols and gestures are getting co-opted, but they’re desacramentalized. There’s no pointing to a realm beyond. Again, the mystery is missing. My icons are in invitation from the visual into the infinite.”

“Pandemic Madonna,” a very personal painting, is Ahlborn’s prayer for mercy to those who are suffering under the lash of the coronavirus, and a pleading for intercession to the Blessed Mother.

The icon is reworked from an altarpiece by the Renaissance painter Pinturrichio for the church of Santa Maria dei Fossi in Umbria, Italy.

In lieu of a dreamy azure sky and a landscape of empurpled hills, however, here the background is a flat, fathomless black. The two figures—Mary and the infant Christ—are stripped down to the barest attributes of iconography.

No sumptuous velvet here: Mary wears a plain brown tunic, monkish in its simplicity. Her green mantle could have come from Target and she wears a mask of the jarring chlorine blue we’ve come to associate with “cheap” and “disposable.” Her eyes above the mask are reddened with tears and fatigue.

With all that, she will not fall asleep at her watch. Her entire being is focused upon the precious child she cradles in her lap.

The infant Christ is likewise bleary with fatigue. Yet he, too, sits erect, his small bare shoulders squared. In one hand he grips a modestly-jewelled crucifix; in the other, morphed from a pomegranate in the original, a globe of the earth.

Only a woman who has stood at the foot of the Cross, the icon seems to say, is equipped wholly to receive and hold the suffering of the world. Through pandemic, economic collapse, terror and death, Mary abides. Her left hand protectively grasps Jesus’s small elbow. Her right hovers delicately beneath the globe—eternally poised to catch us should we fall.

Adds Ahlborn, “ ‘Be intent on discovering what the Lord is working in your soul,’  Teresa of Avila once said.”

“Through my art I do hope that something that will trigger the breadbrumb trail back to remembering who we are.”