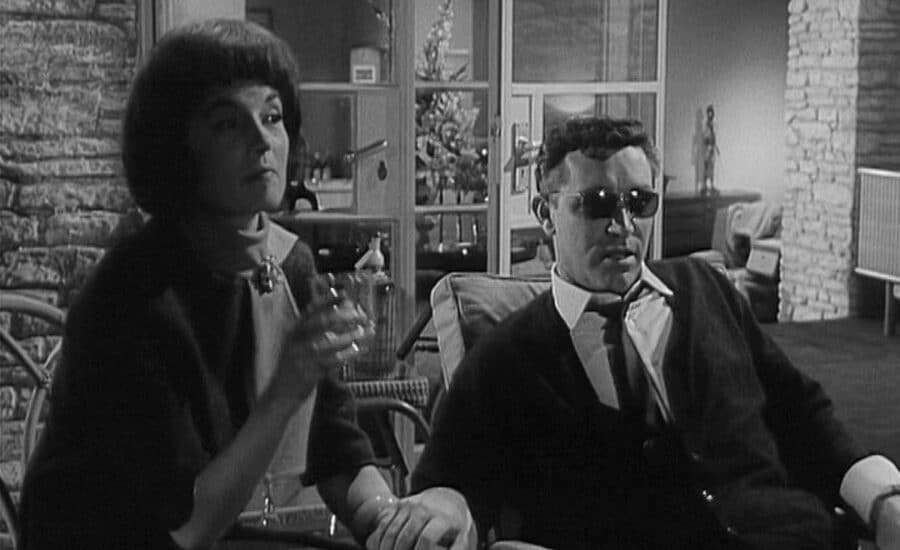 BLIND CORNER, 1965, BRITISH CRIME, dir. LANCE COMFORT, STARRING WILLIAM SYLVESTER AND BARBARA SHELDON.
Paul Gregory is an accomplished composer despite his blindness, and his beautiful wife Anne seems to be the perfect supporting wife. But unknown to Paul, she is having a passionate affair with Ricky, a struggling artist.
I caught this one on fandor.

My taste is a mixture of high-brow and low-brow that tends toward classic dramas, film noir, and documentary.

I revere Robert Bresson: Diary of a Country Priest (1951), A Man Escaped (1956), Pickpocket(1959). I’ve written here of Pasolini’s The Gospel According to Matthew(1964), named by the Vatican as “the best film about Jesus ever made in the history of cinema.”

That doesn’t mean I always worship at the feet of the greats. Last year, for example, I finally forced myself to sit through Bergman’s The Seventh Seal (1957), routinely hailed in critics’ circles as one of the greatest ten films of all time. It was torture. The whole thing, an allegory about death set in medieval times, was such a giant bore I was actually indignant by the end. I loved A Winter Light and The Silence. But The Seventh Seal?—come on.

Also worth pondering is the mystery of how the same director could make a masterpiece like The Gospel According to Matthew, and then devolve into the moral obscenity of, say Salò.

While I’m on the subject, the most repulsive contemporary mini-series I’ve dipped into was Killing Eve, which after an episode and a half I realized was nothing more than a vehicle upon which to hang corrupt scenes of pathological physical, sexual and emotional violence for no other reason than the pornography of the violence itself. Obviously this is a whole genre, in which I have zero interest.

I like a story, a moral, and a tragic flaw and am thus instead a sucker for black and white films from the 40s through 60s with evil femme fatales, sadistic husbands, conniving mistresses, deranged prison wardenesses, and demented DIY surgeons.

Don’t get me wrong: if The Seventh Seal is your thing, more power to you. But the kind of thing that tends to grab me is this amazon prime blurb for The Story of Esther Costello(1957): “A terrible accident leaves Esther Costello (Heather Sears) blind, deaf, mute and without a mother. Living in squalor with her aunt, Esther is rescued by a Margaret Landi (Joan Crawford). Esther learns how to use sign language and blossoms into a lovely young woman. But her life darkens when Margaret’s scheming husband, Carlo (Rossano Brazzi), comes back into the picture.”

To that end, I’ve compiled some perhaps lesser-known films—or old favorites—that have entertained, consoled, and challenged during this quarantine time.

Films About Megalomaniacal Populist Politicians: A Face in the Crowd (1957), in which  the male lead, Andy Griffith, was badly miscast, but worth watching for the astonishing Patricia Neal and the uncanny resemblance to someone occupying a high office today!). All the King’s Men (1949), based on the Pulitzer Prize winning novel by Robert Penn Warren, starred Broderick Crawford as Willie Stark and won three Academy Awards. Sadie Burke was played by Mercedes McCambridge, who I read up on  afterwards: she had an alcoholic son who embezzled the futures trading firm he worked for by forging her name, then killed his family and himself leaving a sarcastic note ending, “Night, Mother”—thereby proving, once again, that truth is stranger and more awful, often, than fiction.

British Boarding School Dramas: The Browning Version(1951): Michael Redgrave as Classics master, looking back at what he sees as his failed career in the last few days at his post; beautifully-acted tearjerker); The Prime of Miss Jean Brodie(1969, based on the Muriel Sparks novel): Maggie Smith as morally corrupt queen bee teacher at an Edinburgh girls’ school.

Plastic Surgery Movies: Eyes Without a Face(1960, French): crazed doctor is determined to perform a facial transplant on his car crash-disfigured daughter; The Face of Another(1966, Japanese New Wave): man maimed in work-related accident receives life-like mask that cannot, however, mask his tortured soul. Very timely.

Films About Brutish, Heartless Men: Room at the Top (1959, Laurence Harvey and Simone Signoret)—make him marry you, girls! Underworld U.S.A. (1961, dir. Samuel Fuller). Scene between Cliff Robertson and Dolores Dorn in which she tremulously ventures that she’d like to marry and have his children will send chills down your spine.

Documentaries About Ballet Dancers: The Margot Fonteyn Story (1989, dir. Patricia Foy). “So I took my courage in my hands, and said, ‘Yes, I’ll daahnce ‘Gisele’ with Nureyev.” I can’t watch ten seconds of this without weeping. One of the most stupendous and beautiful human beings who ever lived. Afternoon of a Faun: Tanaquil Le Clercq (2013). Another stellar human being. Le Clercq’s career was cut short by polio.

Documentaries About Dysfunctional Families: Crumb(1994). The king of them all—one of the first real peeks into the darkness of “family.” Abducted in Plain Sight(2017): I mean if the guy next door in small-town Idaho kidnapped your teenage girl and took her to Mexico, you’d have an affair with him, withdraw the charges, and let him come over and sleep in her bed at night afterward, too, right?

Because at the end of the day, aren’t we all blind, orphaned, criminal?

I’m haunted by Barbara Graham, the real-life felony murder accomplice upon whom the 1958 film noir I Want to Live! was based. “Oh, have you ever been desperate?” she blurted at trial. “Do you know what it means not to know what to do?”   On her way to the gas chamber, she added: “Good people are always so sure they’re right.”