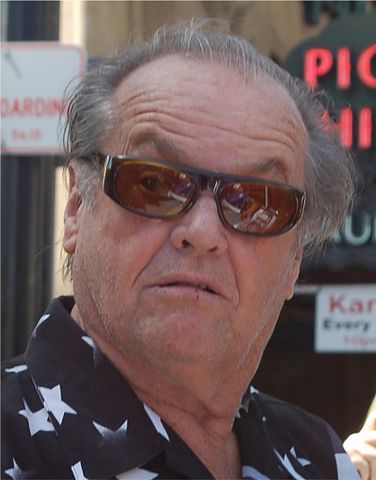 JACK NICHOLSON, 2010, photo ANGELA GEORGE, COURTESY WIKIMEDIA COMMONS.
THIS PHOTO ISN'T IN THE EXHIBIT BUT IT MAKES ME THINK HEY, MAYBE I COULD BE A MOVIE STAR, TOO!

Remember the carefree days when we could leave our homes, gather in public places maskless, and take in a museum exhibit of a Sunday afternoon?

I did that, way back on February 23. It was right after the Annenberg Space for Photography mounted a presentation, now “up” through July 26, called “VANITY FAIR: HOLLYWOOD CALLING: The Stars, the Parties, and the Powerbrokers.”

Who knows, things may be open by July 26th. If not, you can see many of the photographs and take a very well put-together audio tour through the Museum’s website.

I like to think I’m above such superficiality but the fact is I’m as wowed at a celebrity sighting as the next person.

Not that there have been many of them over the years. When I first moved to town in the early 90’s, I saw Brooke Shields across the room at the Broadway Deli in Santa Monica. I once spotted the actor William Macy at the Larchmont Village Farmers Market. The problem is I don’t watch that many contemporary movies or TV shows.

Gloria Swanson, Glenn Ford, Richard Widmark, Bette Davis—now if one of those stars walked down the street, I’d be falling all over myself trying to get a better look.

As it is, I was once at Joan’s on Third in West Hollywood with a friend when he hissed, “Don’t look now, but three-o’clock, the guy in a leather jacket with the babe. It’s Matthew McConaughey.” I said, “Matthew who?”

“Vanity Fair,” of course is the “high-gloss, high-impact” magazine that blew onto the cultural scene in 1983 and to its credit, still occupies center stage.

The phrase is derived from John Bunyan’s 1678 book, “The Pilgrim’s Progress.” Vanity, a town on the pilgrimage in which a never-ending flashy fair took place, was meant to emblemize our attachment to the passing things of the world.

The novel, by William Makepeace Thackery, was published in nineteen installments during 1847-1848, and featured the original mean girl, Becky Sharp.

All these years later, you can revel in the glamour and the glitz and realize that not much has changed.

In fact, the magazine derives from an earlier Jazz Age iteration, which featured writers like Dorothy Parker and Aldous Huxley and was called by “The Wall Street Journal” “the literary equivalent of the most diverse and sparkling cocktail party imaginable.”

Well, maybe, but in modern times portrait photography has become the magazine’s forte. Anne Leibovitz has been for decades its chief chronicler, and her work figures prominently. Herb Ritts, Helmut Newton and Lord Snowdon, as well as more contemporary celebrity photographers, are also given significant space.

The exhibit was curated by Vanity Fair’s creative development editor David Friend, and the former director of photography Susan White. It focuses on the annual Hollywood issue, an event of great hoo-ha, and is accompanied by a short film by director Alex Horwitz about the creation of the 2020 issue.

Some of the photos are familiar. It’s a thrill to see them up close.

There’s Madonna (Steven Meisel), gracing the April, 1991 issue, in her sequins and diamonds looking for all the world like a shrewder Marilyn Monroe.

There’s Nicole Kidman in backless green velvet, lounging on a sofa in Virginia Woolf’s place in England, taking a break from the filming of “Eyes Wide Shut” (Leibovitz again; October, 1997).

The showstopper, though, is our own Jack Nicholson (Leibovitz, 1992) practicing putts in his Mulholland Drive yard. His dressing gown flies carelessly about his tanned thighs, a cigarette dangles from the corner of his mouth and those trademark bad-boy eyebrows are raised as if to say, “If you got it, flaunt it, baby.”

It’s the perfect combination of Southern California insouciance and hard-driving star power, and you can’t look at the photo without grinning.

Another stopped me in my tracks for a different reason: Mark Seliger’s portrait of Vanessa and Kobe Bryant at the “Vanity Fair” Oscar night party, 2018.

Kobe, in impossibly elegant black tie, is fondling the Best Animated Short Film Oscar he just won for “Dear Basketball.” Vanessa, in a form-fitting blood red gown, is leaning over the back of the chair to kiss him.

You realize there’s a reason these people are on the walls. They’re more beautiful than you and me. They have some magic we all reach for.

But Hollywood is the center of the universe when it comes to capturing those brief, dazzling moments.

Besides—where would we all have been without film and TV these past months?