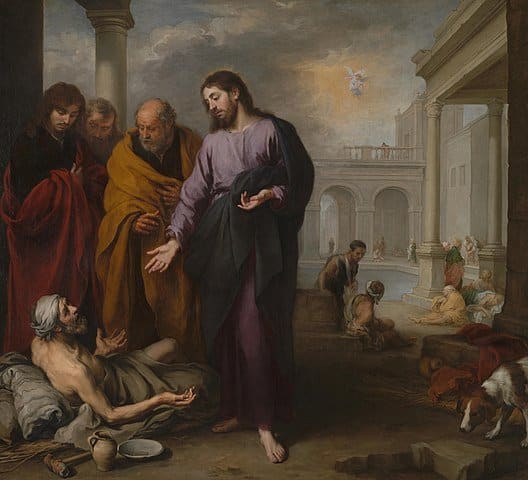 HEALING OF THE PARALYTIC AT BETHAISDA, BARTOLOMÉ ESTEBAN MURILLO, bet. 1667-1670

One of my all-time favorite Gospel passages is the healing of the paralytic by the pool in Bethaisda:

Now there is in Jerusalem at the Sheep (Gate) a pool called in Hebrew Bethesda, with five porticoes.

In these lay a large number of ill, blind, lame, and crippled.

One man was there who had been ill for thirty-eight years.

When Jesus saw him lying there and knew that he had been ill for a long time, he said to him, “Do you want to be well?”

The sick man answered him, “Sir, I have no one to put me into the pool when the water is stirred up; while I am on my way, someone else gets down there before me.”

Jesus said to him, “Rise, take up your mat, and walk.” Immediately the man became well, took up his mat, and walked.
–John 5:2-9

Really? Thirty-eight years and not one person has helped you? Did you ASK? Do you WANT to be healed?

Then pick up your mat and walk.

Lately, many similar directives have appeared in the Scripture readings.

Thursday, April 30th:
“The angel of the Lord spoke to Phillip, ‘Get up and head south on the road that goes down from Jerusalem to Gaza, the desert route.” [Acts 8:26]

“There was a disciple in Damascus named Ananias, and the Lord said to him in a vision, ‘Ananias.’ He answered, ‘Here I am, Lord.’ The Lord said to him, ‘Get up and go to the street called Straight and ask at the house of Judas for a man from Tarsus named Saul.” [Acts 9:10-11].

Saturday, May 2:
“As Peter was passing through every region, he went down to the holy ones living in Lydda. There he found a man name Aeneas, who had been confined to bed for eight years, for he was paralyzed. Peter said to him, ‘Aeneas, Christ heals you. Get up and make your bed.’ ”  [Acts 9:32-34]

I especially like that last one. When you’re in rehab for alcoholism or addiction, one of the first things they tell you is to make your bed each morning.

“Why?” is your thought. “I’m just going to lie down on it again at night.” (Or more likely if you were back home, all day, as you schemed how to rustle up more booze money).

But as responsible adults know, making your bed is a way to participate in the world of light, order, goodness, cleanliness, truth, self-love and thus, eventually, it’s to be hoped, love of others.

It’s a way of saying, I want to be well (more or less). I’m not sure what being well will mean, and I’m not sure I’m up to it, and to tell you the truth, I’m scared out of my wits to be dying to this old identity as a sick person, a person who can’t be counted on for anything so don’t even bother asking.

I figure if I’m killed while, for example, on my way to Mass, the people who enter my apartment will be cheered by the fact that my bed was made and my desk was clean and the dishes were done and that probably means a whole lot of other important things were in order.

Also, Christ is my roommate. He made his own bed, even when in the tomb. When the disciples entered, they found the cloth that had covered his head rolled up “in a separate place” [John 20:6-7] How thoughtful is that? If he can do it–and after all he’d just been through!–I can do it.

Besides, as Paul said after his conversion, “Not that I have already attained, or am already perfected, but I press on.” [Philippians 3:12].