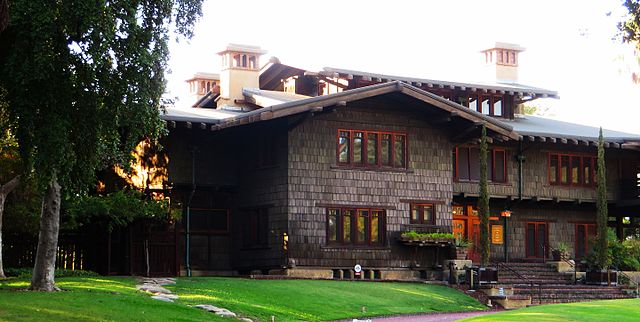 Native Angelena Mary Gandsey was born in Long Beach and moved to Altadena in 1984.

She earned a BA in Psychology from UCLA in 1968, did a few odd jobs, had a child, and needed to go back to work shortly afterward. “As a kid, I used to help my dad with little projects around the house. I’m a person who needs to move in my work. So I decided that I really wanted to do something in construction, maybe a carpenter.”

A neighbor’s mother, a realtor, was hiring people to do some painting on a spec house. Around 1981, Gandsey ended up being part of that first crew.

Her next job was at an 1868 Victorian on Huntington Drive originally owned by the Rose family, after whom the city of Rosemead is named. The new owners hired Gandsey to do some of the paint removal. “I learned a lot from the wife, along with some of the others there who were doing wood stripping and refinishing.”

From thereon in, she more or less trained herself. If she had a question she’d ask at the paint store. The owner of the Rose family house knew the owner of the Charles Greene house, of the iconic American Arts and Crafts architecture firm Greene & Greene.

One thing led to another. Gandsey had found her vocation.

“I’ve worked on a lot of really wonderful homes, architected homes from the turn of the last century.”

Typically, such homes have lots of wood trim and built-in cabinets that over the years have been painted: doorjambs and casings, baseboards, picture moldings, crown moldings, windows, drawers, doors, cabinets.

Gandsey does all of it. She’s currently on an 8-month job at a huge, three-bedroom Craftsman in Altadena.

Different woods have unique qualities. Each wood has its own personality, properties that are unchangeable. Fir is a heavy wood with a flame-like grain and a red undertone. It’s very splintery, which can be a problem.

Cedar has a similar grain but the flame is more rounded. The color is blond, much lighter than fir, and it has that wonderful fragrance.

“Recently I’ve been working on gum wood, eucalyptus. It has a very interesting grain, mostly light in color, but surprising streaks of dark that come out of nowhere and disappear. It’s gorgeous and I really love it. Very easy to work with, easy to sand, doesn’t splinter. Same with oak and mahogany.”

She uses a heat gun to remove the bulk of the paint. A chemical, either methyline chloride, or a newer non-toxic stripper called Citrus Strip, takes care of any remaining residue.

“It’s like being an archeologist. When you remove the paint you can often see shadows of moldings that have been removed: a plate rail, for example, or a picture molding.”

After getting all of the paint off, she does a light sanding with 220 or 330 grit sandpaper, then stains the wood, and applies two coats of finish.

“I’m partial to tung oil varnish, which penetrates the wood and still has a very nice satin finish. Satin is more appropriate I think than semi-gloss for Craftsman houses.”

Those are the broad outlines but the work is painstaking. Any holes or places where the wood has splintered are filled with putty that’s carefully matched to the color of the grain. Analine dyes, which are able to penetrate the grain of the wood and color it, are sometimes used instead of oil-based stains. Gandsey is constantly keeping up with new products, formulas, and VOC (Volative Organic Compound) regulations.

She doesn’t advertise. All her work—and there is plenty of it—comes through word of mouth.

“It’s kind of an old-school, Old World craft. At times, I’ve had so much work that I hired someone to help me. I’ve learned you have to have a vocabulary for what I do and if you don’t have the experience you don’t really understand the patience required.”

Gandsey isn’t the type who’s likely to think: That’s good enough. “I’m a 95-98% detail person. A single door, for example, would probably take 14-16 hours to remove paint to the finished product. That’s why I get these jobs.”

In trying to train people for the work, she’s learned that each person has his or her own skills and niche. Some people’s eyesight or hearing is better. Whether by instinct or training, she herself has a fine sense of touch, so even with a vinyl glove she can tell whether the surface is sufficiently smooth.

Wood refinishers don’t get plaques, but there’s a sense of contributing to the community and of permanence that’s hard to define.

“It’s a privilege to work on these houses that most people don’t get to see.” Gandsey has also worked on both the Gamble House and Castle Green, two crown jewels of historic Pasadena architecture.

“It’s been an interesting trip. It’s so satisfying. When I look at this wood that’s been covered for 80 years and take the paint off, I feel like it’s thanking me, it can breathe again. It’s been suffocated for all this time. Wood is a living thing. It needs to be nurtured and fed and taken care of.”

“The work I’ve done makes me feel that my life has been worthwhile.”

One Reply to “MARY GANDSEY, RESTORER OF WOOD”