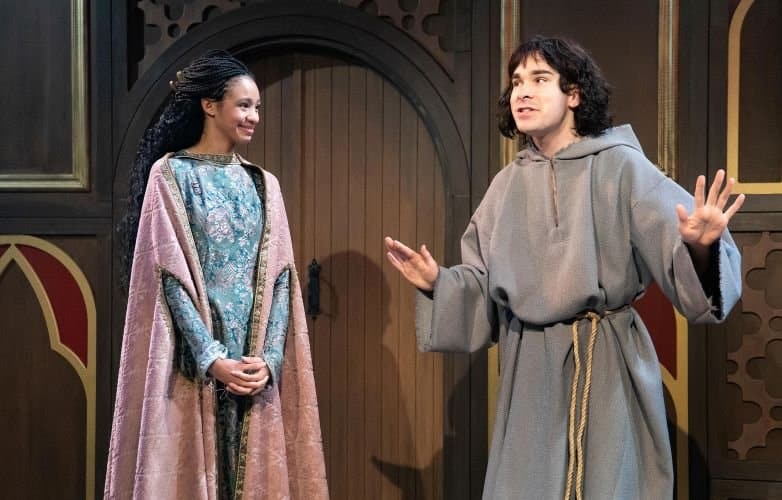 I was scheduled to attend the performance of the play described below on Sunday, March 13. But like just about everything else in these uncertain times the opening has been postponed and the show was cancelled.

Nonetheless, the theater says the set is up and everything’s ready to go as soon as the coast is clear. So here you go.

The Echo Theater Company will soon be presenting “Poor Clare,” the world premiere of a play by Chiara Atik that offers a “funny, powerful, modern spin on the Middle Ages.”

The production will be staged at the Atwater Village Theater. Alana Dietze (“Dry Land,” “The Wolves”) directs. Chris Fields is the artistic director.

Here’s the setup: “Clare is just a regular noblewoman living in medieval Italy, trying out hairstyles and waiting to get married… until a man named Francis starts ranting in the courtyard. “Poor Clare” is about what happens when your eyes are opened to the injustice of the world around you — and you can’t look away.”

The play, set in 13th-century Italy and based on the story of St. Clare of Assisi, is nonetheless totally relatable in today’s culture. Clare and her sister Beatrice (Troy Leigh-Anne Johnson and Donna Zadeh), like teens down through the ages, are obsessed with fashion, boys and local gossip. Being rich, the girls also discuss these topics with their live-in help (Kari Lee Cartwright and Martica De Cardenas).

Like today’s young people, they’re also aware of the suffering of the world and along with their mother, Ortolana (Ann Noble),try to “give back” by organizing clothing drives and food distribution.