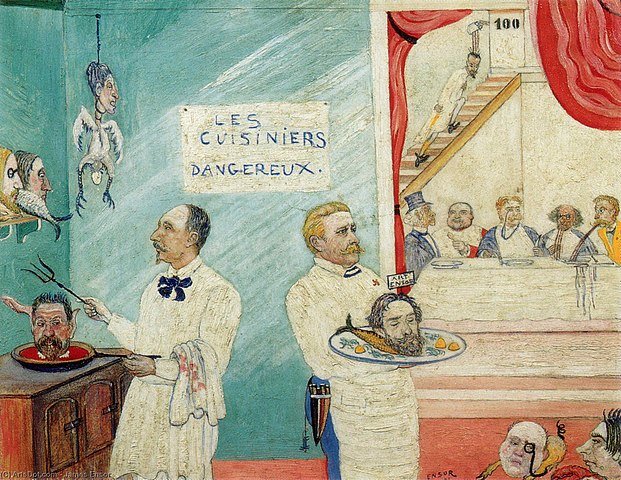 In shaky economic times I must say, I feel right at home.

Right away I descend into bunker mentality mode.

In fact, having grown up one of eight in a blue-collar home–our father was a bricklayer–I’m more or less always ready for a disaster.

I have enough semolina, bulgur, wheat berries, polenta, brown rice, pearl barley, farro and pasta on hand at all times, for example, that I could easily live, in a pinch, for probably a couple of months.

The other day I said to my little sister, “Remember when we had Saltines in milk for a snack?”

“Saltines!” she replied. “Try a torn-up piece of Bonnie Maid!”

Bonnie Maid was notorious among us King kids. Generally we fell upon food of any kind or quality like wolves. But even we drew the line at Bonnie Maid, a product that purported to be bread, but was made of air and fake sponge and bleached an unnatural, chemical white. An entire loaf could be squished into about a two-inch square cube, and we often made pellets out of the stuff and threw them at each other.

The point is we were the farthest thing from fussy. We ate home-made popsicles fashioned from watered-down powdered Kool-Aid, sometimes brought spaghetti sandwiches (on Bonnie Maid of course) to school for lunch, and cut slices of Velveeta cheese from a giant rectangular block that came in a cardboard box.

We also dug clams, caught lobsters, haddock, cod and bluefish, and had a vegetable garden. Everything we ate–pancakes and muffins for breakfast; shepherd’s pie, meatloaf, fish chowder for dinner—was made from scratch. We ate what was put in front of us and we were grateful, or grateful enough. Not one of us, all these decades later, is overweight. We all love food and most of us like to cook.

So Mom and Dad did us right, in any number of ways.

The other thing that formed me in this regard is my years in Boston during the 80s as a hopeless alcoholic. I pretty much lived during that time on Buzzy’s Roast Beef, Stouffer’s chicken pot pies, food filched from customers’ plates or the bus bucket of whatever divey restaurant I happened to be waitressing in, and Winstons.

I don’t eat like that any more. I haven’t made a Trader Joe’s run since the madness began but I probably will soon. Dried apricots, almonds, endive; yogurt, olive oil, cheese. My friends Bud and Craig work at TJ’s and are thus at this point in the nature of first responders or health care workers. Daily they’re exposed to possible disease, daily inundated with people, daily called upon to be cheerful and personable.

I like good food as much as the next person, in other words, but I’m also still not especially fussy. So when everyone in LA was running around moaning, “The shelves are empty! The shelves are empty!” I drove right down to my local 99-cents Only store and came back with three overflowing bags.

I saw my downstairs neighbors on the way in. “Did you go food shopping?” they asked excitedly. “Hell yeah!” I replied. “And I don’t know what everyone’s panicking about. Why, I just nipped down to the 99 and there’s all kinds of produce and cleaning stuff, trash bags, toothpaste, candy…and then if you’re worried about running out, like I bought a few cans of sardines and a big jar of crunchy peanut butter!”

They froze. I realized from their stricken faces that I might just as well have announced, “Hey there’s a special on botulism flakes down the street” or “I know a place where you can stock up on salmonella juice!”

I love this couple. They’re funny, generous, thoughtful, supportive and kind. They’re raising a two-year-old who brings the whole apartment compound joy. But neither they, nor 95% of my other friends, would in a million years think of shopping at the 99, for anything, much less food.

As I hauled my cans of Parrot coconut juice upstairs, I could hear them discussing the Instacart app.

Later that day I reflected that the way I was formed by my childhood and drinking years, though, doesn’t really have to do with food. It has to do with gratitude, with wonder, with a deep desire to live every moment to the fullest. A capacity to get excited about simple things, to mine the riches in the smallest, most unpromising situations. To be a person upon whom nothing is lost, to stay awake.

It has to do with having been the recipient of unmerited mercy, and of therefore knowing in my better moments not to take or to use more than my share. It has to do with being fully aware of how far I am capable of falling, and how fast. No one who has lived for 10 years in a welfare hotel with the bathroom for the whole floor at the end of the hall emerges without the mark of the poor in spirit branded deep in his or her soul. My neighbors in that welfare hotel in some sense sustained me during “the dark years,” and in some sense my heart is therefore always with them.

So last Friday, for the first time in a week, I went down to the 99. I could have driven and bought more, but the sun was shining after days of cold and rain so I brought a backpack and walked the mile or so instead. I passed a few others: mothers with strollers, kids playing in the yard, older people like me out for a constitutional, or trying to get away from their spouses, or just wanting to feel the warmth on their faces and see the spring flowers: golden California poppies, purple lavender, Western redbuds.

As I approached the store, a group of raucous guys loitered to the side of the parking lot: blaring a boombox, making vulgar comments, smoking weed, and passing around quarts of malt liquor. They were standing about two inches away from each other, and in general totally disregarding the recent strictures.

Inside, the shelves were stocked, people were orderly and subdued, and one woman wore a mask. There were cheap bouquets for sale inside the door, and signs saying “Cashiers wanted”–because who wants to work at a grocery store during a pandemic?

My own cashier was a young woman with chipped purple nails, a bad tattoo of a rose-entwined Cross and I’m pretty sure a wig who’d been spraying down the conveyor belt with cleanser and stopped as I approached to glance up and say, “I’m open.”

“How are you guys doing?” I asked. “Okay,” she said vaguely. Not wanting to chat, distracted maybe or just tired, and I suddenly wanted to hug her.

Instead, I bagged my own groceries, said “Thank you so much, take care,” wrapped my hand in a scarf before opening the door, and walked back past the knot of carousing guys–jeering and coarse, clowning a little too loudly, like boys whistling in the dark.

“I love the mountains, Lord,” I told Him on the way home, “and the trees that are in bloom. I love the sidewalk, the recycling bins. I even love the guys who are refusing to observe the rules and because of their carelessness someone may die: maybe that cashier, who probably has to ring up their booze; maybe me.”

“Or anyway help me to try to love them, because they are not one bit different than me: arrogant, selfish, out for myself. I don’t like to think of myself as a hoarder, but how many times have I barricaded my heart against The Other, my womb to new life, my precious time against ‘intruders’? Since when did I become such a lily-white, upstanding ‘citizen’?”

“And what about that (now hemorrhaging) ‘retirement’ fund that the world says is so smart, but aren’t we supposed to be people who are in the world but not of it, and have we ever seen more clearly how quickly and completely the world will fail us? Didn’t Christ himself say, ‘You fools, storing up your money in barns, when this very night your life will be demanded of you!’ ”

“So help me to love those heedless guys because the poor you will always have with you, and who can sort it all out, and Lord have mercy: on my pride, my failures of charity, my carelessness, my greed. ‘O wash me more and more from my guilt and cleanse me from my sin…O purify me, than I shall be clean; O wash me, I shall be whiter than snow’ “…

It was a beautiful walk, with the clouds edged in gold and the fresh green leaves unfurling, and made me feel sorry for all the people in the world with Instacart.

I returned with Benadryl, aloe vera skin lotion, fat-free half and half.

They were out of TP but I bought a single roll of paper towels, which will hold me for a while.

So “The shelves are empty”? No. Not by my lights. Not by a long shot.