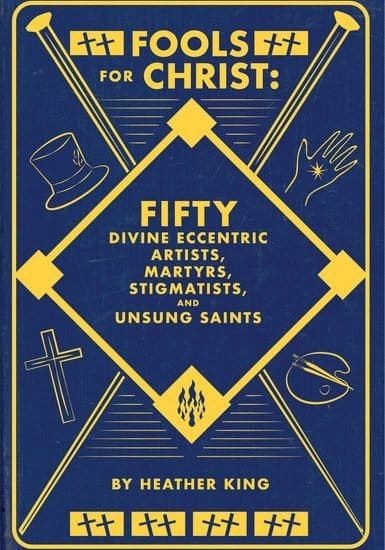 Last week I was talking to my dear friend Greg Camacho, of San Antonio, Texas. During the course of our conversation, he said “I was looking for one of your books the other day and saw the title Fools for Christ. Which looks like it’s hot off the press. Did you bring out a new book and NOT EVEN MENTION IT?”

“Well, kind of.  I published my womanhood book, RAVISHED, around the same time, both on amazon’s self-publishing platform, so I thought I’d wait a bit to talk about this one”…

Apparently the time has come. I hired a designer, Rowan Moore-Seifred of DoubleMRanch Design, and the interior layout is every bit as compelling as the cover.

To read yourself or give to friends: fifty short essays on notable Catholics, across the ages! Two criteria: the subject can’t (yet) have been canonized, and he or she has to be dead.

Some are hardly known. Jacqueline de Decker, for example, wore a neck brace, drove a red convertible, and hung out with prostitutes in her native Belgium. She also offered herself as a victim soul to help Mother Teresa.

Some should be better known: Mother Antonia Brenner, a Beverly Hills socialite, went off to live in La Mesa, a notorious Mexican prison, and spent the rest of her life ministering to the inmates. Jacques Fesch, a movie-star handsome French murderer, was condemned to death and wrote a stirring conversion memoir—Notes from the Scaffold—before being guillotined.

There are medieval nuns, a Carmelite dishwasher monk, and modern day martyrs.

There are divine eccentrics: Bartolo Longo, ex-Satanist priest. Marthe Robin, who supposedly never slept, survived for 40 years on the Eucharist, and received the stigmata each Friday.

“Here comes everybody,” as James Joyce quipped of the Church.

Glory be to God.

And here’s a link in which I’ve included a few excerpts.

I do think this would make a lovely CHRISTMAS GIFT.

2 Replies to “FOOLS FOR CHRIST”