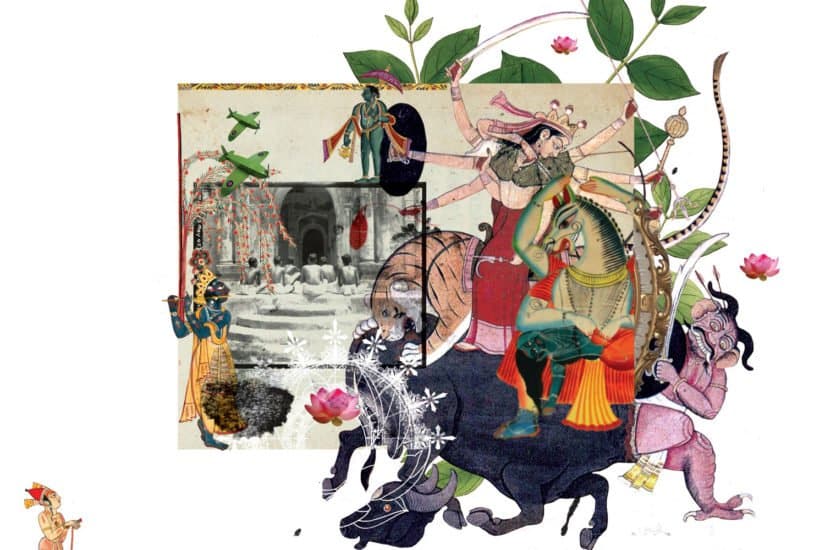 Toward the end of World War II, an unknown U.S. serviceman, stationed in India, took over a hundred black-and-white photographs of the people and life in rural West Bengal.

Decades later, Chicago-based artists Alan Teller and Jerri Zbiral bought an estate-sale shoebox of photos and negatives, a treasure trove that would forever link their destinies to that unknown soldier’s.

Through Jan. 26, 2020, an exhibit called “Following the Box” at the Pacific Asia Museum in Pasadena, features 12 contemporary artists, two American and 10 Indian, who have been inspired by the photographs to create works of their own.

Each artist was given digital and/or print copies of the photographs and asked to incorporate, deconstruct, or in some way imaginatively spin off of them. Disciplines include painting, photography, film, mixed-media, installation, graphic arts, graphic novels, book art and folk art.

Curators Teller and Zbiral served as “participant conduits” with their efforts included alongside those of their Indian colleagues.

“Following the Box,” they maintain, “is a visual conversation between Americans and Indians across space, time and culture, a mystery tale of old photographs and a celebration of new artistic interpretations.”

It is also, mainly, haunting. Who was the serviceman photographer? We don’t know. Was he commissioned to take the photos or simply moved by curiosity and interest? We don’t know.

We know that he used a Speed Graphic 4×5” press camera. Thanks to years of curatorial research, we know that he was stationed at a then secret military site called the Salua Air Field.

A couple of cavils:

The background noise of two (at least) continuously looping videos make concentration difficult. Many of the works include small-scale images and text that require up-close peering, and all deserve single-minded focus.

And if you haven’t first acquainted yourself with the exhibit through its website, you will enter the main hall and have very little idea of what you’re looking at or hearing.

Not until two galleries to your left will you get your bearings, in the form of thirty of the original 4×5” photographs, a selection from the 127 vintage images in the collection.

Clearly, the U.S. serviceman was captured by the people with whom he was surrounded. The photos are respectfully and carefully composed, with a striking lack of “colonial gaze.” The subjects—a plow, a woman selling pottery, a man tending a forge, a group of children playing—are so elemental as to seem timeless.

From there, the contemporary artists collectively create an intriguing cross-cultural palimpsest.

Swarna Chitrakar’s two hand-painted scrolls and sung poem depict her amazement and delight at the discovery of the photos.

Prabir Purkayastha comes from a family of farmers, dancers, and story tellers. His series of six triptych panels form the photo-essay narrative of a fictionalized U.S. soldier named John Miller who the artist imagines as the unknown photographer.

Teller’s “The Ruined Temple” is based on a poem by noted Bengal poet Rabindrath Tagore.

Amritah Sen’s accordion format photo album juxtaposes the Bengali villagers featured by the American serviceman with photos of her own parents’ middle-class life in India in the early 1940s.

Mamata Basak repurposes the pictures by placing them in a framework of miniature Mughal miniature paintings.

Sanjeet Chowdhury’s “Series B-29” consists of six digital prints on archival paper of dreamlike photos superimposing a toy model airplane, clouds and a giant camera. An accompanying short video takes the form of imagined letters read by the unknown photographer (who in Chowdhury’s imagination is Jewish) to his girlfriend back in the States.

Bits and pieces of history, much of it horrifying, seep quietly through. Chhatrapati Dutta’s combination of text, posters, comics and photos memorialize the Famine of 1943, in which three to four million Indians died—largely because England, under Churchill, had bought up all their rice for the war effort and hoarded it.

We learn of the devastating 1942 Japanese bombing of Kolkota, of the often-violent independence movement of which Bengal was the center, of the death of Indian Nationalist Subhas Chandra Bose, who famously said “Freedom is not given, it is taken.”

We feel our cultural ignorance, the unimaginable harm we can unthinkingly do each other, the seeming powerlessness of the individual.

And yet it is always within our power to “bother to love.” If I came away from “Following the Box” with one thing, it’s that the real history of mankind is written not in books, but in the anonymous, generally invisible human encounter.

That unknown serviceman saw the humanity of the other. He captured the value, the dignity, the beauty of the lives that, for whatever reason, he felt moved out to meet.

Even had the photographs remained undiscovered, moldering away in a shoebox in Chicago, his efforts would have remained a light shining in darkness, a silent cry against famine, war, blindness, greed, fear.

That they were discovered constitutes its own kind of miracle. Kudos to Alan Teller and Jerri Zbiral for recognizing the photos’ value, opening a dialogue, and so creatively and imaginatively sharing them.

The approximately 3,000-sqare-foot exhibit has been shown in Kolkota, Delhi, and the Loyola University Museum of Art in Chicago. Workshops, lectures, screenings and conversations will take place throughout its duration at the Pacific Asia Museum.