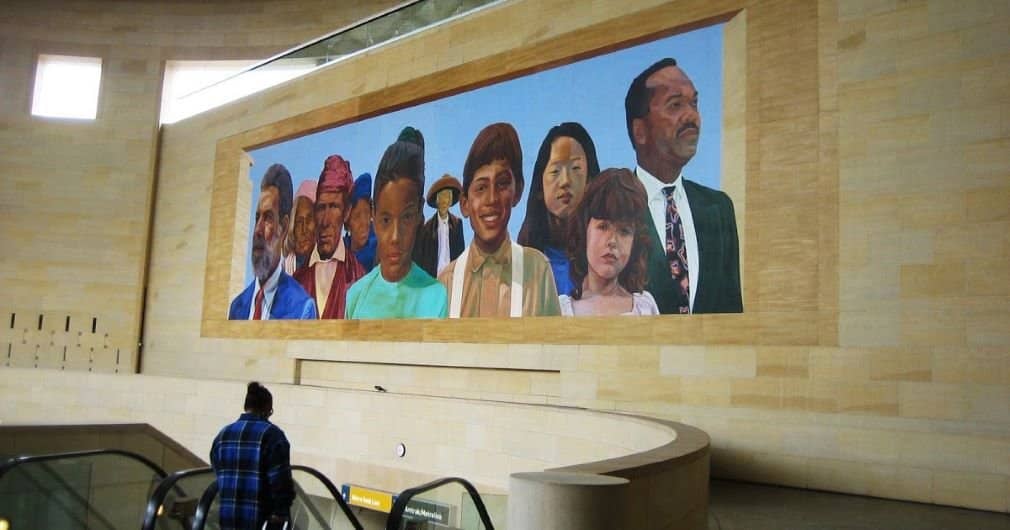 Richard Wyatt in collaboration with May Sun, "City of Dreams, River of History" (1995).
This large mural in the East Portal to the Union Station Metro depicts early and contemporary settlers of Los Angeles.

Here’s a perk of our glorious city: LA’s snazzy public transportation system offers free, docent-led art tours led in various Metro stations throughout the city. You can check out the possibilities at Metro.net/art.

Union Station tours are held on the second Sunday of the month and run from 10:30 to approximately 12:30. Over the summer, I made my way downtown and joined a lively group led by the inimitable Maurine Kornfeld.

The builders of the First Transcontinental Railway we learned—Collis Porter Huntington, Leland Stanford, Charles Crocker, and Mark Hopkins—were the 1% of their day. In order to build Union Station the City claimed eminent domain, cruelly ousting the Chinese who lived on-site—and who had largely built the railroads in the first place.

The architect was John Parkinson, a native of England who also designed City Hall, Bullock’s Wilshire, and the Coliseum. In the original ticket concourse on the north side of the station, he introduced an infrastructure of steel—stronger and better insurance against earthquakes than the traditional brick on brick.

The concourse chandeliers, still in place, are 10 feet in diameter and weigh 10,000 pounds apiece. We dutifully craned our necks to gawk—then moved back a few steps.

No sooner did the Mission Moderne style building open, on May 3, 1939, than post-WWII air and car travel rendered it more or less obsolete. Today, however, 60,000-70,000 people pass through each day, and Union Station is a popular spot for free weekend events and film shoots.

Maurine brought the place alive with stories and brio. In the olden days, there were dressing rooms along the west wall where you could freshen up, get your hair fixed, and smoke a relaxing cigarette.

In the main terminal glazed tile wainscoting, hand-stenciled coffered ceilings, and filtered light create almost a cathedral feel. But the contemporary art, commissioned by the Metro and dotted throughout the station, marked the tour’s high point.

If you’ve ever taken the Union Station FlyAway bus from LAX, you’ve entered the terminal from the eastern, Vignes Street, side. Outside, Self-Help Graphics artist-in-residence Richard Amescua has created 79 “papel picado” metal cutout railings depicting mythical figures and symbols. “Guardians of the Track,” as the panels are known, border the Patsaouras Bus Plaza and elegantly evoke the city’s Latino heritage.

Inside, Richard Wyatt and May Sun collaborated on the large scale installation “City of Dreams/ River of History.”

Travelers alert enough to glance skyward will be greeted by Wyatt’s eighty-foot long mural, which comments on the cultural history of the Union Station site by depicting both early and contemporary settlers of Los Angeles, including friends and family members. Sun has created an allegorical river with historical artifacts and bronze paving inserts leading to an aquarium filled with fish indigenous to LA.

At the east portal escalators to the Red and Purple lines, artist Bill Bell’s twelve pulsing light rods are meant to evoke the windows of a passing train. I just got dizzy, though others in my group spotted Marilyn Monroe, Lassie, and Marlon Brando among the car’s “passengers.”

We briefly toured the adjacent Metro Transportation Building, which boasts its own treasure trove of art.

But my favorite piece, back in the main terminal, was Roy Nicholson’s “Solar Shift: San Bernardino and Santa Monica” (2006), at the entrance to the Gold Line.  Nicholson’s jewel-like glass mosaic murals, on two facing concrete walls, reflect LA’s  position on the 34th parallel—as well as serve to orient the subway traveler—by depicting Santa Monica at sunset to the west and the San Bernardino Mountains at dawn to the east.

How many times had I, who pride myself on my powers of observation, sprinted through this very station on my way home to Pasadena without once noticing this beautifully conceived and executed installation?

With all that, we only scratched the surface of Union Station alone. Since 1989, the Metro Art program has commissioned over 250 artists for a wide variety of both temporary and permanent community-centric projects at stations throughout the city. (Download the Metro Art Guide for an overview).

“One of the things that I think is most exciting about our program is that there is such a diversity of artists,” says Maya Emsden, Executive Officer of Metro Art & Design. “Artists are working in so many wild ways.”

And I couldn’t get over our docent who, though vital and lovely, was let’s just say no spring chicken. “My goal is to help you see something here that you’ve never noticed before,” she’d said at the beginning of the tour: Well, mission accomplished.

I’ve since learned that “Mo” Kornfeld is 97 years of age, starting swimming just before her 60th birthday, drives two freeways to get to the Rose Bowl Aquatic Center where she trains, and holds several world records in the 95-99 age group.

Of her upbringing as a Camp Fire Girl in Great Falls, Montana, she recalled in a recent “LA Times” article, “You focused on others, not on oneself. Remember, selfies hadn’t been invented yet. In any sense.”

2 Replies to “ART IN THE LA METRO STATIONS”