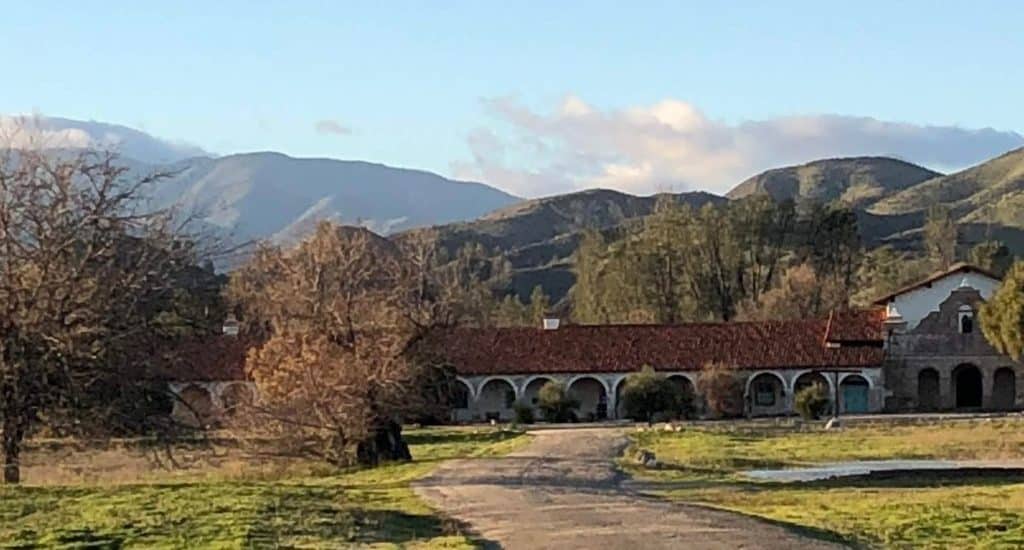 More than 20 years ago my (now ex-) husband and I took a road trip to Big Sur, cutting off the 101 north of Paso Robles to take the scenic Nacimiento-Fergusson Road. Then newly Catholic, I swooned when we came across what at that point was the largely abandoned, picturesquely derelict Mission San Antonio de Padua.

We stopped there to picnic, basking in the quiet and birdsong. Not long after, I learned that the Mission was undergoing renovation and that retreat rooms would soon be available. Ever since, I’d had it in the back of my mind to return to this enchanting place.

A few months ago, I finally reserved a room for three nights, made the trek from Pasadena, and prepared to fulfill my dream. The Mission is 30 miles or so from the 101 and the landscape is breathtakingly beautiful. It’s also undergoing a noisy retrofitting and directly abuts a military base that seemed to have grown exponentially since our earlier visit.

The suggested donation is a reasonable 60 bucks a night. You bring your own food — there’s a fridge, coffee-maker and microwave. Behind a locked gate were the central courtyard, where volunteers worked the rose garden, a lovely church, and dorm rooms.

I arrived around 3 p.m., settled in, and reconnoitered the grounds. Here I learned about the Salinan Indians the missionaries met when they arrived in the 1770s, and whom they stayed to try to convert. You can still see the remains of the Mission Well, the Brick Kiln, the Mission Reservoir, and the “Temescal” (“Mission Sweat-house”).

In the distance loomed Junipero Serra Peak, named for the well-known padre-saint and at 5844 feet, the highest in the Santa Lucia Range.

I’m always whining how I want quiet: well! My first night there I was totally alone. Not only was I the only retreatant; there wasn’t even a caretaker on-site. My room was located in a wing of former monks’ cells and once the sun set, the hallway looked and felt exactly like a set from the Jack-Nicholson-goes-mad movie The Shining. Since the bathroom was down the hall, this made night-time quite exciting.

The second afternoon a large, “former law enforcement” I’ll called Thor showed up, smelling strongly of alcohol. He cornered me in the dining room to tell me the story of his divorce, and that night lurked in the hall outside our rooms pacing up and down and bawling loudly into his cell phone.

“Don’t worry, there’s a base right down the street,” the retreat director had assured me, but this was scant comfort. Say Thor went berserk, God forbid, and tried to break into my room. What was the U.S. military going to do when I dialled 9-1-1—lob over an ABM?

I had to flee across the freezing cold, pitch-black courtyard to the church, kneel before the altar, and say the St. Michael the Archangel prayer.

All was not lost. The landscape as I said was beautiful, and I had several nice tramps around the perimeter of the property.

Around 1834, I learned, the Missions were secularized and San Antonio de Padua had fallen into disrepair. Not until the early 1900s did historians begin to realize the Missions’ unique value. William Randolph Hearst’s vast land holdings included Mission San Antonio; in the late 1940s, he helped fund its restoration.  In 1950 the church was re-dedicated and is today an active parish.

I also toured the Museum. Here, you can view among many other things a Salinan woman’s tule (reed) cape, blankets, baskets, arrowheads, a replica of an Old Mission rip-saw, candle molds, textile dyes, guns, stock brands, a Spanish lady’s jewelry case, and a facsimile of Padre Serra’s room. This last in particular was just my style with a single horsehair bed, an image of the Sorrowful Mother, and a small writing desk with a crumbling leather missal. As long as they had wifi, I would have done fine there!

Not to be missed is the Museum gift shop which is crammed with vintage Catholic tchotchkes and alone is almost worth a visit. I splurged and bought a rosary of green stones that has come in quite handy on a number of emotionally fraught occasions since.

Still, having had enough of jackhammers, cement mixers, and being scared to leave my room at night, I decided to leave a day early. Served me right, probably—thinking things would be just the same as twenty years before. As I went to my room to pack, a flotilla of RVs arrived, processing down the winding driveway, parking in the shade and spilling out loads of people, children, coolers, lounge chairs and gear.

On my way out, I waved goodbye to Thor. Then I passed a wooden placard marking the site of the old “tahone” (grist mill).

“The animal, usually a donkey or an ass, would be led around the circle, thus turning the grist-stone and grinding the grain beneath it. The animal was sometimes blindfolded to facilitate its patient plodding.”