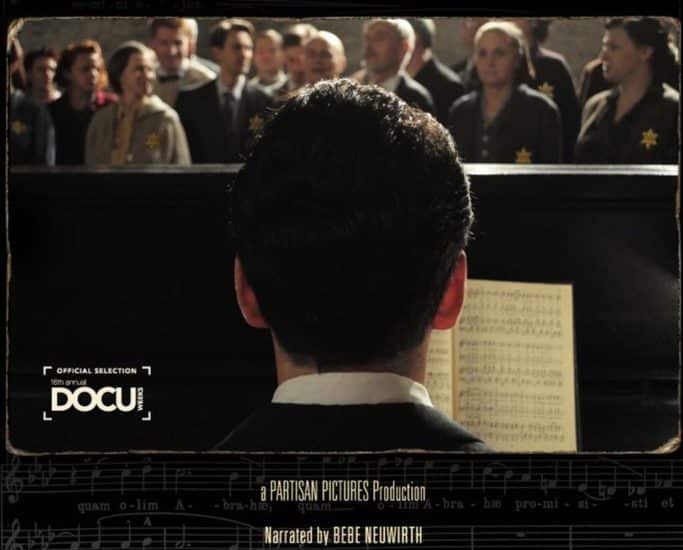 “Defiant Requiem” is both a documentary film, and the name given to a multi-media concert drama, directed by Murry Sidlin, that was recently performed at UCLA’s Royce Hall.

Still, many of the inmates were intellectuals, artists, musicians.

Scholars began giving lectures on science, religion, psychology. Rabbis transformed a hidden room into a secret synagogue. The camp erupted into a thriving cultural center; “an academy of prisoners.”

When the transports east to an unknown fate began, inmate Rafael Schächter turned to one of his most precious possessions: a single score of Giuseppe Verdi’s Requiem Mass. A conductor, he decided to teach the inmates to play and sing what is universally acknowledged as one of the world’s most demanding choral pieces.

An outcry went out around the camp. Why pick a Catholic Mass when there are works by, say, Handel, on Jewish themes?

Because, explained Schächter, the Requiem takes as its central theme the notion of holy judgment. The “Dies Irae”—Wrath of God—runs:

A written book shall be brought forth
which contains everything
for which the world will be judged.
And so when the Judge takes his seat
Whatever is hidden shall be made manifest,
Nothing shall remain unavenged.

Together, they would perform the piece as a subtle way of denouncing the Germans and underscoring their eternal fate. They would sing to the Nazis what they could not say to them.

Without scores themselves, an amateur chorus had to learn each note, in Latin, by rote.
Each night, after hours of slave labor, Schächter and his singers would descend into a cold, dark dank cellar in order to practice.

“Rafi was a very nice guy to be with socially, but when it came to rehearsals, he was merciless.”

The results, said the inmates, were transformative. Singing the Requiem “was like a prayer that overcame hunger and other pains.”

“These were hours of pure joy—as much as you can have joy in camp.”

“This was not the world of the Nazis. This was our world.”

With a chorus of 150 inmates and a single piano, Schächter led his first performance, with the other inmates in attendance, in late fall, 1943.

The next morning 5000 inmates were loaded onto transports. Half the chorus was removed to Auschwitz. Over the next six months, Schächter recruited more new members. They would perform the Requiem fifteen more times.

In June, 1944, the Germans staged a fake propaganda film for the International Red Cross portraying Terezín as a quaint village with a library, fake-fronted stores (stocked with goods that had been confiscated from incoming prisoners), and an orchestra.

Under orders from the Nazis, Schächter conducted a chorus that had been reduced to 60. It would be the last performance of the Requiem from Terezín..

“Deception is not the word,” said one former inmate. “If anyone would have come two weeks later, there was nothing left…The children had all gone, into the gas chambers.”

On October 15, 1944, a transport was announced in which almost the whole choir was to be shipped East—Schächter among them. They were loaded onto cattle cars and sent to Auschwitz. On October 17, 1944, most were exterminated.

Schächter survived Auschwitz and three more camps. He died, by all accounts, on a death march in March, 1945. A month later, liberation came to Czechoslovakia.

Six decades later, conductor Maestor Murry Sidlin took Verdi’s Requiem back to Terezín with a new choir and performed the Requiem in the very room in which the first performance took place.
At Royce Hall on April 17, the live performance included video testimony from members of the original choir, clips from the Red Cross propaganda film, and actors positioned in the orchestra to provide occasional commentary. Soloists were Aga Mikolaj (soprano), Ann McMahon Quintero (mezzo-soprano), Edgaras Montvidas (tenor) and Nathan Stark (bass-baritone). The “Dies Irae” rang out so resoundingly as to raise gooseflesh. The “Libera Me”—Deliver me, O Lord—reduced me, for one, to tears.

As the Requiem ended, slowly the performers left the stage: the chorus, the musician, the commentators, and finally Sidlin himself, leaving a lone violinist playing against a backdrop of period footage of inmates being herded onto trains.

The emotion was palpable. We audience members strained to jump to our feet, shout, wave our handkerchiefs. Instead, a short announcement appeared on the screen: “In lieu of applause, please observe a moment of silence in honor of Rafael Schächter.

It was a stillbirth of a kind, a snatching away, a robbery, a silence where there should have been sound, acclaim, rejoicing. Nothing could have more clearly illustrated the finality, the utter existential and moral wrongness of death, and worse, of the mass extermination of the Holocausts.

“They have our bodies, but not our souls, our minds, our hearts.”

“I got the Requiem as a present to take with me all my life.”

And nothing shall remain unavenged.