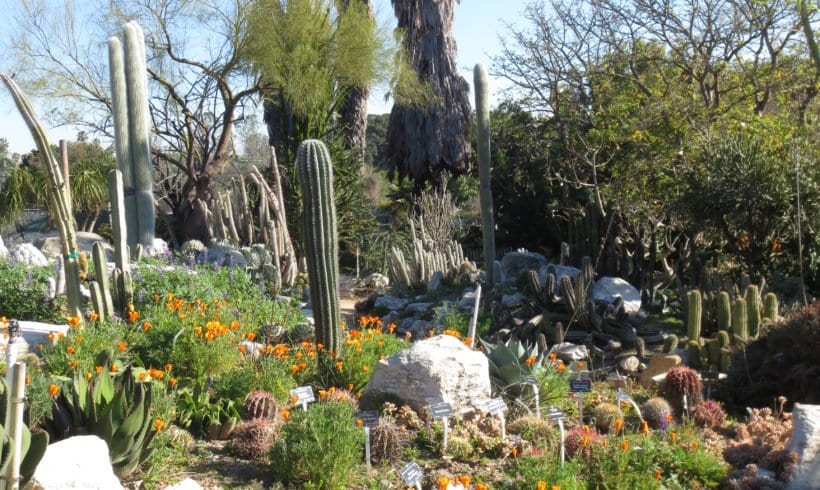 Their mission “is to serve the community by providing a unique horticultural and wildlife habitat experience, and to represent a model of excellence for land reclamation and sustainability.”

And once you get away from the somewhat frou-frou fantasy wedding atmosphere that pervades the entrance and environs (you can rent out a portion of the garden for all manner of fancy events), you start realizing that the long drive was well worth it.

Not that the entry area is anything to scoff at. The Living Wall, for example, is a 400 square-foot vertical garden consisting of felt which has been pierced at intervals in order to hold small bare-root plants, in this case mostly succulents, “like a giant cross-stitch project.” The effect is geometric and quite striking.

Make sure to wear decent walking shoes because what you then want to do is take off in any direction. Alpine Lane, Acacia Loop Road. Star Pine Road, Creek Lane, Canyon Road: all will reward. You’ll come upon detours, turnoffs, rambling side paths, and cul-de-sacs, all studded with surprises.

An unusual yellow bird-of-paradise. “Georgie Red” monkeyflower. A section of Redwoods. A bench almost overgrown by nasturtiums and shaded by a magnolia. A rambling patch of purple wisteria just coming into flower. A Mexican lily with hanging-lantern blooms of jade green.

A tram, making frequent stops, will take you around the perimeter if you’d rather. I personally enjoy a place big enough that you can enjoy a real tramp.

But here’s the greatest, the truly remarkable thing about the South Coast Botanical Garden: it’s built on a sanitary landfill. That’s right. 87 acres of beauty sitting atop a giant pile of human waste!

The story goes like this: the area at one point was at the bottom of the Pacific Ocean. Single-cell algae known as diatoms compacted to form diatomaceous earth, useful in the manufacture, among other things, of swimming pool filters, toothpaste, and building material components. Surface mining began in 1910, then open-pit mining, then the property was sold to the City of Los Angeles in 1956 and the land converted to use as a sanitary landfill, mostly for residential waste.

Around 1959, a visionary named Frances Young joined forces with other private citizens and began to promote the landfill as a regional botanic garden. As a district director of California Garden Clubs & Horticulture Societies, she cajoled members of the County Department of Arboreta and Botanic Gardens, in particular Dr. William S. Stewart, then director of the LA Arboretum in Arcadia. On April 20, 1960, the Garden was officially dedicated. Two hundred people showed up, the first trees were planted, and the project was launched in earnest.

A 1962 photo captures Frances, wearing glasses, a dark blue housedress and sensible shoes, in the South Coast’s first Dahlia Garden. The rest of the place looks like a salt flat, nothing like the lush expanse of trees, shrubs and flowers that now abound.

The garden progressed in stages. There were problems galore at first: the ground settled and buckled, ruining irrigation pipes and necessitating the re-paving of the parking lot. The decomposing waste generated intense heat that virtually wiped out early plantings.
But eventually the garden was established and began thriving. Bit by bit additional acreage, a weather station and restrooms were added. In 1969, a two-and-a-half acre lake was installed.

Today the site includes a Children’s Garden (the South Coast is madly kid-friendly), a Rose Garden for that fairytale wedding, the Japanese Garden, the Desert Garden, the Garden for the Senses, the Banyan Grove, the Pine Cone Cove, and various Meadows.

As well, during the LAUSD teacher strike, the garden offered free admission to students and their caregivers, and also devised additional educational programming. CEO Adrienne l. Nakashima recently traveled to the Phipps Conservatory and Botanical Gardens in Pittsburgh to discuss, along with the leaders of other large U.S. gardens, how their respective institutions can best to lead the way to address climate change.

What would the world be like if, instead of sitting around on social media sniping at each other, we used our energy to prevail upon the powers-that-be to create gardens? Or better yet, planted a garden ourselves?

Thousands of horticulturists, botanists, workers and volunteers have made the South Coast what it is today. All hail to Frances Young, whose vision helped create what is now known as “The Jewel of the Peninsula.”