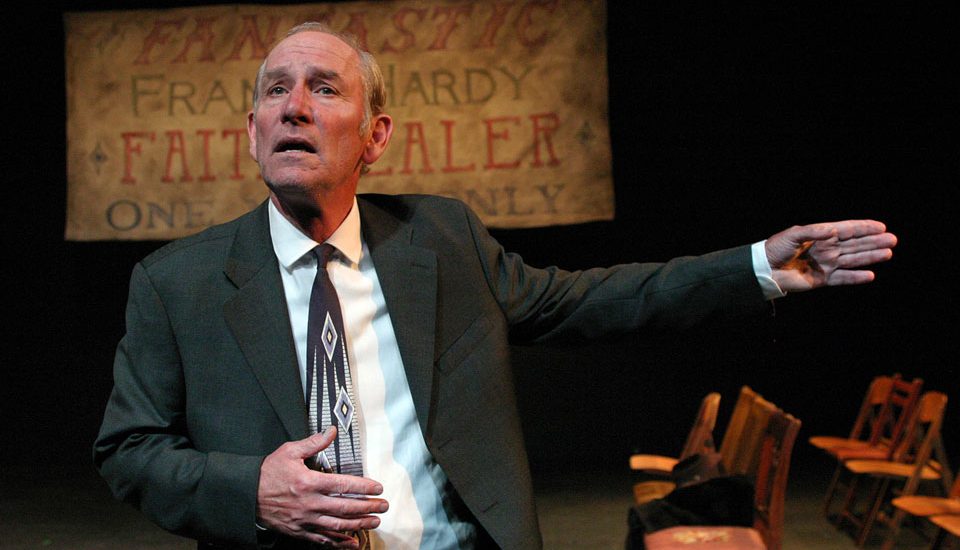 How can you not love an evangelist who was married (briefly) to a man named Burroughs A. Waltrip of Dallas, and who was sued by her personal administrator for purportedly stashing away a million bucks in jewelry and another million in fine art?

Plus I actually agree with everything she says: I, too, beLIEVE in miracles! I, too believe that Jesus Chrrrrist is the very Son of the Living God. I, too, believe that love is something you…DO!

Which brings me to “Faith Healer,” by Irish playwright Brian Friel, at the Odyssey Theater Ensemble in West LA through May 12.

Director Ron Sossi (also the Odyssey’s artistic director) describes the play as “at once a Rashomon type mystery, a delving into talent versus sham and, ultimately, a uniquely metaphysical view of life”—well, sign me up!

Brian Friel (1929-2015), perhaps best known for “Dancing at Lughnasa,” wrote prodigiously and is considered one of Ireland’s most prominent contemporary playwrights. “Faith Healer” premiered in 1979 and comprises four monologues.

“Fantastic” Francis Hardy, played here by Paul Norwood with a potent mix of pathos and blarney, is an itinerant Irish healer who travels about Scotland and Wales performing purported miracles and knowing that the hope he imparts is mostly phony.

Nonetheless, one time out of ten or so he does effect a healing. And in those rare and precious moments, he can forget the questions that undermine his life. Do I truly have a gift, he wonders. Or am I a conman? Do I love the people I heal, or do I hate them (and vice versa)? Are my powers in decline?

“The kirks [churches] or meeting-houses or schools—all identical, all derelict,” Frank observes of the towns through which he and his entourage of two pass. “Maybe in a corner a withered sheaf of wheat from a harvest thanksgiving of years ago or a fragment of a Christmas decoration across a window—relics of abandoned rituals.”

Frank’s long-suffering wife Grace speaks from her bedsitter in London. In a white satin nightgown and ratty winter coat, she chain-smokes, swills whiskey, and downs pills against the pain of some “absolutely horrific” trauma. Played to perfection by Diana Cignoni (her nationality changed here from English to German), of the three characters she seems to have the clearest, most trustworthy insight into her own psyche and motives. Though emotionally brutalized by Frank, and wary of his gift, she recognizes that even half-drunk, “he had a special…magnificence.” What woman—or man—isn’t a sucker for magnificence?

Teddy, Frank’s promoter (a spot-on Ron Bottitta), is a consummate Cockney showbiz hustler who purports to have one cardinal rule: keep your business and personal lives separate. He seems not to know—but then again, he kind of does—that he has broken the rule completely in his years of traveling with Frank and Gracie.

Teddy plays dumb but he has his own undermining questions: Why didn’t the incessantly bickering Frank and Grace split? Why didn’t he leave them?

All three refer to certain seminal events—for example, a night at a Methodist church in Wales when Frank cured ten people at once—but their memories vary wildly,

Was Grace Frank’s wife, or his mistress? Did Frank purposely bolt when Grace was giving birth or was he absent because of the death of his mother—or was it his father? Or did she never give birth at all because, as Frank insists, she was barren? Was it Frank’s ultimately disastrous idea to return to his native Ireland, as Grace and Teddy insist, or Teddy’s, as Frank insists?

They do agree that the return took place at the end of August, just as harvest time was beginning, that they happened upon a wedding party at a bar in Ballybeg, and that there Frank healed a farmer with a bent finger.

Also present that night in some form was a paralytic in a wheelchair who all three knew in advance that Frank would be unable to heal. But was the cripple at the wedding party or holed bitterly up at home, dead or alive, a figment of their collective imagination or a broken Christ figure, calling Frank through the cathedral arch to his death—or was it new life?

Frank’s epilogue doesn’t so much tie up the loose ends as lead us deeper into mystery. Is “Faith Healer” a play about childhood wounds, the hero’s journey, the magic of theater, unrequited love, the fragility of memory, the impossibility for an artist of marriage, the death of religious faith, the anguished hope that we are not ourselves 100% phony, the fact that every human relationship is at best a tangled knot?

All that and more. As Teddy says of Gracie that night in Ballybeg: “And suddenly she is this terrific woman that of course I love very much, married to this man I love very much—love maybe even more. But that’s all. Nothing more. That’s all. And that’s enough.”