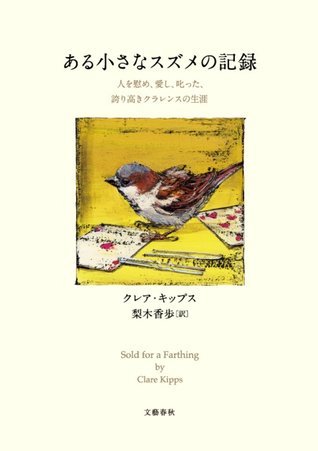 Nothing brings me more joy than sharing a little-known book. Here is one such hidden treasure: Sold for a Farthing, by Clare Kipps (1953).

Kipps was an Air Raid Warden in London. Her husband died in 1940. Two weeks later she found an injured sparrow on her front stoop.

“Feeling that if a new-born infant is left outside one’s doorstep something should be done about it, I picked it up, wrapped it in warm flannel and, sitting over the kitchen fire, endeavored for several hours to revive it. After I had succeeded in opening its soft beak…I propped it open with a spent match and dripped one drop of warm milk every minute down its little throat.”

The bird had a deformed leg and one wing set at an odd angle. Knowing that releasing him into the wild would mean certain death, she proceeded to nurse him back to health. A mutual bond was formed and the two end up living in a kind of strange, quasi-conjugal bliss for the next 12 years.

At first Kipps has to learn not to step on, disturb, or inadvertently crush the sparrow. Though the bird was tamed, Kipps, to her credit, never viewed him as a pet. She viewed him as an equal, a creation of God: an individual unlike any other, worthy of observation, respect and love. Her aim was to call the bird as high as its capacities and gifts allowed.

WWII was on and she left often for her job supporting Britain’s war efforts.

“When left alone in the house he seemed quite content. I often watched through the window to satisfy my mind that he was not fretting in my absence, but apparently, as soon as he realised that I had gone, he settled down and amused himself with his food and toys. I had provided him with a great variety of playthings, but the only ones that ever appealed to him were hairpins, patience cards and matches which he would carry about in his cage by the hour.”

The house gets bombed at one point—the two soldier on.

The sparrow nestles inside Kipps’ sweater as she practices the piano. He reaches his peak around age 5 or 6 and, astoundingly, begins to sing.

“The song itself was in two sections—quite distinct from each other and sometimes sung separately…The first part, or introduction, was an expression of pleasure, good humour, and simple joie de vivre, but the second–the real song–was an outpouring of rapture. Both parts were usually in the key of F Major.”

She teaches him a “programme” of tricks and begins taking him around in a little box to “houses where there were nervous people” and rest homes for traumatized children.

Clarence, as the children called him, could turn a patience-card round ten times in his beak without dropping it, pantomime playing the flute on a matchstick, and perform the Air- Raid-Shelter Trick: at the words, “Siren’s gone!” darting into an improvised shelter and poking his head out several minutes later as if inquiring whether the All-Clear had yet sounded.

“Yet my sparrow, like all our songsters, loved his quiet hours, and especially his noonday rest. It was no small part of our perfect companionship that we could enjoy long hours of peaceful contemplation together.”
“Women of marriageable age” relentlessly pursued him, declaring their love through the window. A little blue-tit was the most “moonstruck” of his many admirers, but the sparrow would have none of it. “Manlike, for men hate a scene and have a very wise aversion to hysterical women, he ignored her utterly.”

Kipps continues in this vein in the most delightful and strange way. The bird cycled through life, aged, declined, and on August 23, 1952, died in her “warm hand.”

“His remains–and what a tiny morsel of tattered feathers was all that was left of him–repose in a small Hoptonwod tomb sacred to the memory of Clarence, the Famous and Beloved Sparrow.”

But first: “There was a remarkable coincidence that I would like to mention in connection with the picture called “The Daily Reading” where he is shown gazing quietly, as if in thought, at the page of a small devotional classic…The book…had been taken from a pile of others and opened at random…After the photograph had been developed I found that the words to which his little beak was pointing were these: “Are not two sparrows sold for a farthing, yet not one of them falls to the ground without your Father?”–a statement that embodies, perhaps, the most astounding revelation of the value to the Creator of the individual personality of the creature in the pages of Holy Writ…This, it seemed, was to be his little sermon, his farewell message to doubting and perplexed humanity; and as such I pass it on. Fear not, therefore! Ye are of more value than many sparrows.”

4 Replies to “SOLD FOR A FARTHING: THE STORY OF A SPARROW”