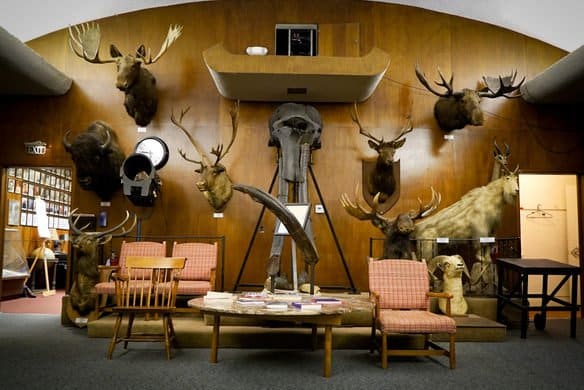 The Adventurers’ Club of Los Angeles, established in 1921, is a private men’s club that occasionally opens its doors to ladies for an evening that includes dinner and a lecture. I attended on one such recent night and found myself thrust into a delightful warp of time and culture.

Located at the juncture of the 5 and the 110, the club is situated in a Lincoln Heights neighborhood of pool halls and nail salons. Skirting the prostitutes plying their wares on Broadway, you go up a set of stairs and find yourself plunged into a space with the décor and feel of the silent movie era. Edgar Rice Burroughs might have spoken here, or Roald Amundsen, polar explorer, who probably actually did speak here, given that he was a member (#188A).

Names I was afraid to admit I’d never heard of were dropped in hushed and worshipping tones: Doolittle (Jimmy Doolittle, #800, General USAF); MacCready (Paul MacCready, #959, designer of the first man-powered plane to cross the English Channel).

Cecil de Mille, #60, was a member. So was Will Rogers, #340A. Survivors of military battles were big, I learned, and so were billionaire film directors, namely James Cameron, for his work on the Titanic. There was much talk of the upcoming Tiki Night, an annual bash with a live band called The Ding Dong Devils at which I gathered the liquor was to flow freely.

The walls of the Main Hall were covered with dusty trophy heads: jackals, javelinas, a barking deer. A Bob Silver surfboard rested against a speaker wafting the wan sound of breaking waves. A threadbare python skin at least ten feet long graced the north wall, the middle part of which had been rudely gnawed away by rodents.

Dinner, in honor of St. Patricks’ Day, was corned beef, cabbage, and potatoes. At table I overheard from one gent: “Ah yes, Louis Leakey and I were quite close” and “I believe I’m one of only three people in the world”…

I also met aviatrix and frequent guest Linda Abrams, who owns and operates a vintage Ercoupe, a rare plane that she has flown solo as far as Wyoming. Another tablemate, a club member, had just completed his first Iron Man at the age of 67. “Wow,” I said, “did you have to sleep for a week afterward or what?” “Not at all,” he sniffed, and went on to describe his next two planned adventures: a sailing trip around the Caspian Sea and a jaunt to Malta with a geophysicist from Scripps in order to date a set of ancient cart-tracks.

The general impression was that these were people who have lived and what you and I lead, or purport to lead, is something so small and paltry as not even to deserve the title “life.” It was like a combination of Boy Scouts, Indiana Jones, and the Tall Tales Club, and I gleefully lapped every word up.

Before the program began, a ship’s bell was rung and all stood for a moment of silence to honor those who had gone on to the Great Adventure in the Sky (my words) and those who were at this very moment out in the world on perilous adventures of their own. Then each attendee introduced him or herself, a courteous, old-school touch entirely in keeping with the club’s esprit de corps. Members announced themselves by name and club number: the lower the number, the longer the membership, and thus the more prestigious.

Folks were then invited to describe an adventure from which they’d recently returned, or upon which they were about to embark. Phrases like “fascination for lost and buried treasures” and “mining claims in Northern California” were thrown about with abandon. Deep sea diving, rock climbing, and a trip to Santa Cruz Island to see Island scrub jays (this was more my speed) were mentioned. One man won my heart by copping to a panic attack while sleeping in a cave outside Rome.

Professor Emeritus Brain Fagan of UCSB delivered an erudite, entertaining talk entitled “The Attacking Ocean: Will We Be Swimming in Fifty Years?”

I am all for men having their own separate clubs, in fact, never more so. And I was touched by the warm and generous welcome I received from the adventurers of LA.

Here’s how I knew that for all their physical nerve, these men have their priorities straight as well. Professor Fagan announced at the beginning of his lecture that he had to leave early because his daughter, or perhaps granddaughter, was giving birth the next morning.

Motherhood, I thought on the way home: now there’s an adventure.

No comments yet
MOTHERHOOD THE ADVENTURERS' CLUB OF LA