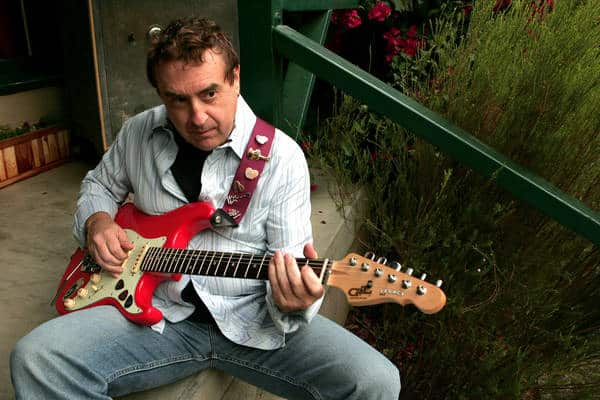 Steve Trovato has been called a jazz master, a superpicker, and a blues and rock virtuoso. He’s a long-time Professor at the Studio Guitar and Contemporary Popular Music Performance Departments at USC. He’s produced his own albums, created dozens of instructional videos and lesson books, won numerous awards, and been recognized internationally. He plays four or five gigs a week around greater LA.

But when we got together recently to talk, he didn’t focus on his accomplishments. He talked about what had made him a musician.

“When I was growing up in New Jersey, we weren’t allowed to talk. Joy, sadness: all emotion was off limits.” There was trauma. There was violence.

He was allowed to play the piano. He got pretty good at it. But at 12 or so, watching bands on Ed Sullivan, he noticed the girls weren’t going crazy for the piano players.

He badgered his father into buying him a 26-dollar guitar. He practiced for 10, 12 hours a day.

“I woke up with the guitar next to me on the bed. I played all day, went to sleep with the guitar, woke up and did it all over again. Week after week, month after month. I practiced like that for at least 8 or 10 years”

He learned to talk and express his emotions, to communicate, through music.
He got a Master’s from Rutgers, toured for five years, became part of the New Jersey club scene. It used to take him 20 minutes to unwind on stage. “I’d hear my father’s voice. ‘You have no talent. Who do you think you are?’ ”

Then he heard about a school that had been founded by some of the world’s best studio players: the prestigious Musicians Institute in Hollywood. He drove his 75-dollar station wagon cross country.

“Through no fault of my own, I graduated number one in the class. 1981. Right away, they asked me to teach there. Me?! So I went to one of my mentors, a guy named Tommy Tedesco, and he said, ‘Steve, just say yes.’ ”

So he did. And he loved it. Giving others the encouragement and support he never received as a kid was a kick.

After a while the school needed a guy to teach country guitar. He’d never played country before, but he went into a classroom and ripped out two tunes: “Squawkin’” and “Root Beer Rag.” The owner happened to be showing around three prospective students that day. They overheard, put down their money and enrolled on the spot.

He ended up teaching at the Musicians Institute for 18 years.

Around 1991 he was asked to do a master class at USC. “The word got out. All these people came down. So I started moonlighting at USC.” He’s been teaching there full-time since 1998.

So how does he spot the student who stands out?

“One kind is the raw, bolt-from-the-blue talent. There’ve been three of them in 27 years at USC. The other kind—my kind—is the one who’s suffered. The immigrant who had to walk 500 miles acros the desert with his little sister and grandmother. Those are the kids who will work really, really hard. Playing makes them feel human; that they’re good enough.”

“Some of the best musicians, from Bach to Beethoven to John Lennon had this kind of suffering. Actually Beethoven combined both sides: both the extreme talent and the suffering. So then you get a genius.”

When he plays himself, he disappears. “I don’t feel the pain. So the music doesn’t come from me; the music comes through me, from some higher place. I can hear passages in my head from Schubert’s “Unfinished Symphony” or Chet Baker or Howlin’ Wolf and instantly re-create them on my instrument. If I have a gift, that’s it. I don’t really play music. I just receive music.”

“I’m speaking, if that makes any sense. I can’t see it myself. But people tell me when I play, they get a snapshot of my soul.”

If you want an idea of what he’s talking about, go to YouTube and listen to Steve’s rendition of “Somewhere Over the Rainbow.”

“I subscribe to the Ray Charles theory of music: ‘Notes is notes.’ The Beatles are my favorite. But if it comes from the heart…Billie Holliday, Bob Dylan, Chet Atkins, Peter, Paul and Mary… so many musicians I love.”

His father never once came to hear him. At his mother’s request, he played “Smile” at her funeral.

With all the music he knows and all the songs he’s played what would he want to be sung out to? What would he ask to hear on his own deathbed?

He muses for a second.

“What’s that old country song? ’I was waitin’ down the station. The train came in. I was greeted by my papa and my papa.’ ‘The Green Green Grass of Home,’ I think it’s called. I never had a real mama and a papa. So yeah. That’s the song I’d like to hear.”