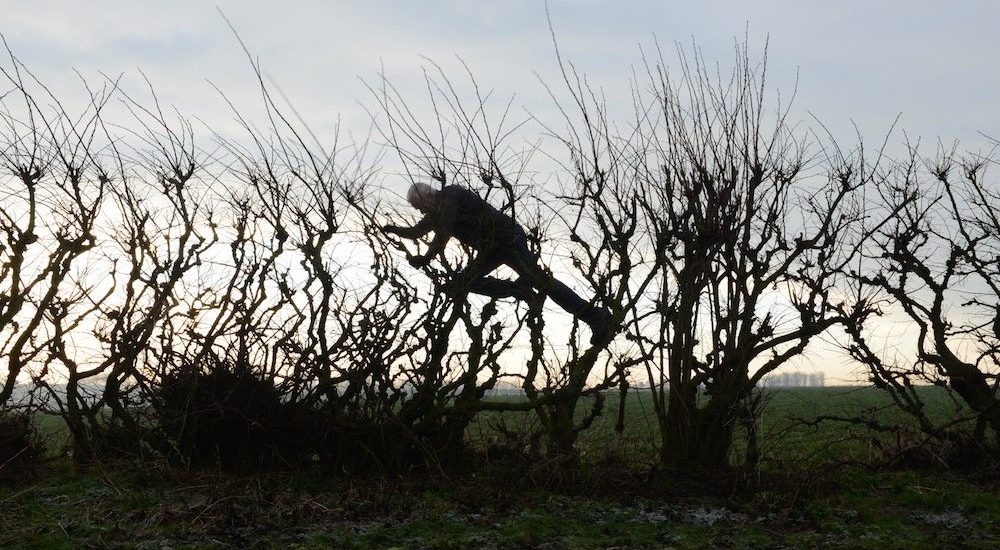 A STILL FROM LEANING INTO THE WIND: ANDY GOLDSWORTHY

Leaning Into the Wind is a 2018 documentary about Andy Goldsworthy, a self-proclaimed “British sculptor, photographer and environmentalist producing site-specific sculpture and land art situated in natural and urban settings.”

Goldsworthy does things like lie on the sidewalk when it rains so that, when he gets up, he leaves a body-shaped dry spot. Or covers his hands with painstakingly-applied bright red autumn leaves, then dips them in the river and lets the leaves wash away. Or sculpts a skinny meandering white line across a stone wall with wool from the sheep who graze the adjacent fields.

You may or may not respond to this. I absolutely do. (Though I may have liked his last film, Rivers and Tides, even better). But however you feel about his art, you have to admit that this good man is alive and vital and questing, questing, questing.

“There are a lot of contradictions in what I make.” When he was younger, he was more sure of how to describe what he does. But the passage of time, losses, and deaths tend to soften and anneal.

Goldsworthy lives and works in Dumfriesshire, Scotland. Through photograpy and film he meticulously documents all of his work.

In one scene, a stand of gnarled, bare-branched smallish trees is silhouetted against a glowering pewter sky. Goldsworthy, a second, moving silhouette, makes his way vertically through them: contorting, grabbing, slithering, half-standing, crouching. Along with the trees, he makes a kind of living sculpture.

He also allows later that he possibly cracked a rib in the process, and was verging on hypothermia by the time he emerged.

He’s willing to suffer, in other words. That’s what saves his work from being precious or formulaic. He hires assistants, translators, stonecutters, woodsmen and guides, but he is always hands-on himself: chipping, sawing, digging, wading, dusting his hands with ochre earth, braving sleet, rain and cold to struggle up a hill and lean into the wind.

“There’s this wonderful sort of tension in the wind—that moment when you’re held there suspended is a very beautiful moment… A moment of clarity in a very chaotic situation…It’s like a shaft of light that penetrates.”

Several years ago he came upon a “sliver” of land near his home. With a running stream, woods, bracken and fallen trees, it’s become a combination studio, laboratory, and sanctuary. “Huge dramas occurring here…It’s a complex place. I’m continually going deeper and deeper.”

Depending on the season, he fills cracks in fallen trees with snow, adorns them  with geometric sculptures made from hogweed stalks, or belts their trunks with yellow elm leaves from a nearby tree. When he discovers that woodcutters have chopped the splayed limbs off one side of a favorite tree, he weeps. Then he makes a black snowball and lays it over the wound.

A powerful sense of movement, change, and time permeates the work.  In the city he makes a stripe of leaves—scarlet or gold or bright green—down a set of stone steps. Pedestrians pass hurriedly by, unheeding. The rain comes and washes hours of work away.

In New England, he muses on the centuries-old stone walls. “There is an implicit threat in walls—wanting to have things, claim things, keep people off. It’s like a nerve, a wall; like you’re touching a nerve.”

He supervises a team who drill holes in giant rocks, drive wedges, split them in two, then form identical twin walls bisected by a deep, narrow trench. Here, a person can pass through the substrata, become part of the wall, inhabit that tension-filled place between heaven and earth.

Afterwards, he sweeps up the dust, stands on a high crag and tosses a handful into the air where it rises, disperses, forms an ephemeral sculpture, then  dissolves.

He fashions “sleeping stones”—oval shaped indentations set into the earth that are like graves except for the living: to lie down in, to contemplate the sky, to reflect that from dust we came and to dust we will return.  “The chambers I make for people to stand or lie in are places to contain memory, the human presence. That will inevitably address the ideas of death.”

“You can walk on the path or you can walk through the hedge. And they represent two totally different ways of looking at the world. I think that’s the beauty of art. It makes you step aside, off the normal way of walking and looking.”

“I fall a lot, and trip. I think learning to fall is important.”

“I’m still just trying to make sense of the world.”

No comments yet
ANDY GOLDSWORTHY TIME