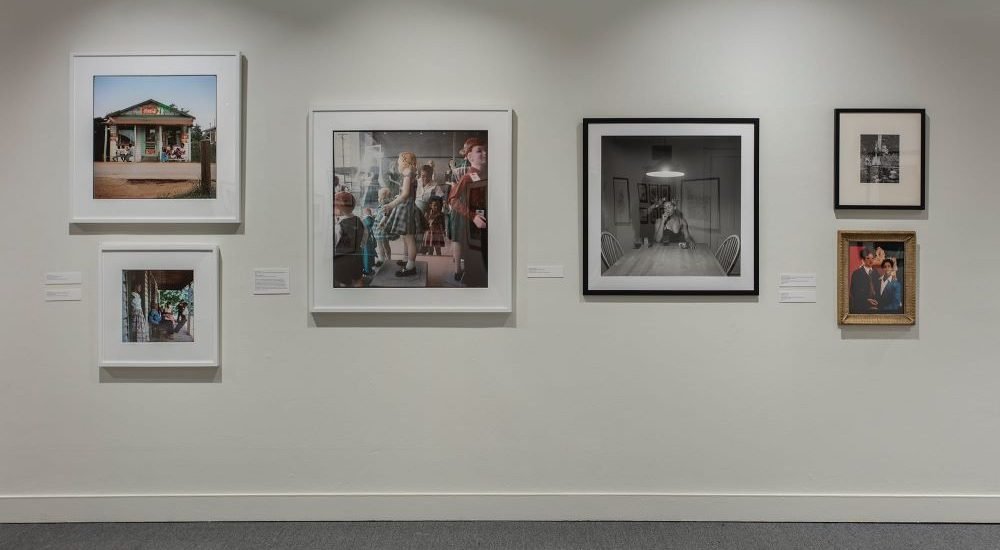 What with the recent Nativity of Christ, the Feast of the Holy Family, and the Solemnity of Mary, Mother of God, “The Notion of Family” at the California African American Museum (CAAM) seems especially timely.

The exhibit comprises artworks from the nineteenth through the twenty-first centuries and runs through March 3.

If you haven’t visited CAAM, you really should. (Their January 21 MLK Day festivities would be a good place to start). It’s down in Exposition Park, a neighbor of the Museum of Natural History and the California Science Center. The building is sharp-looking, expansive, and smart (as is their website). The exhibits, this one overseen by Vida L. Brown, Visual Arts Curator and Program Manager, are beautifully designed to intrigue without overwhelming.

Though this is the smallest of those currently on view, to me it packs the most intense punch.

Paintings, prints, photographs, assemblages, and sculptures chart “a trajectory of African American family and togetherness over generations.” The impression is of a culture formed around steadfast endurance, community, story-telling, music, and food. A palpable rootedness to heart and earth. A slow-burning ember of tears and of rage. The lash marks of generational trauma, and a majestic, near- explosively refusal to be overcome by it.

Miguel Covarrubias’s illustration Negro Mother (1927) could be a contemporary version of a Renaissance Madonna and Child. In William E. Pajaud’s “Friday Night” (1979), a line forms at a fish fry stand, a Lenten tradition in the New Orleans neighborhoods where he was raised.

Faith Ringgold’s 1996 lithograph, The Sunflower Quilting Bee at Arles (1997), is a takeoff on Van Gogh’s iconic painting. Eight African American women, none of whom look to suffer fools gladly, sit among a riotous stand of sunflowers, working a sunflower quilt in order to spread the cause of freedom.

Tracy Brown’s photographs call out to the viewer to supply a backstory. In “Picture Perfect”, a satin-clad bridesmaid solemnly adjusts her exuberant friend’s bridal veil. In “I’m Trying to Tell You,” an older woman, dignified in white lace, imparts earnest advice to…a hot-to-trot grand-daughter? In “Any Given Sunday,” another group of women preside over a table overflowing with scrumptious home-cooked food. The men I imagine—for men can never be far from a meal of this caliber—must be in a yonder room.

Dominique Moody’s “A Lost Treasure Found” is a powerfully evocative work of mixed media, collage, and assemblage. Eight jet-black full-body silhouettes on white canvas, eerily reminiscent of shooting targets, are labeled with text adumbrating both the glory and the wounds of fellow family members. “Sibling #4: Edward, My brother, the artist of his mind’s eye, a stranger in a strange land.” “Sibling #5: Vanessa, My sister, the butterfly still searching for her true reflection cloaked beneath the beauty of her own metamorphosis.” “Sibling #10: Name Unknown, The other brother, the one left behind to straddle the fence between two worlds.”

Through the accompanying assemblages—sepia-toned maps, teacups covered with gauzy fabric on which ghostly photographs are superimposed, snatches of dictionary definitions—the viewer is given to learn of the brilliant though troubled patriarch of this brood.

In fact the whole exhibit is subtly overshadowed, I realized later, by the specter of present mothers and absent fathers, of anguished longing, of the human bloodcry for the family to be healthy, whole, together.

But it was a 1990 black-and-white photo by Carrie Mae Weems before which I stood the longest, A simple scene: Saturday night, perhaps, in a middle-class kitchen. A table, an ashtray, two tumblers of wine.  A mother standing, a daughter old enough to have been around the block, to have young kids of her own, in a satin slip, sitting.

The mother brushes the daughter’s hair, cupping one side of her head with such tenderness and such strength that she might have been holding up the whole world since time began. The daughter, eyes closed, leans into that maternal hand; eases, sighing, into the love. A blessed moment of rest, as John perhaps felt as he leaned against Christ’s breast at the Last Supper.

Before leaving, stop in at the adjacent exhibit: “Los Angeles Freedom Rally, 1963.” Stand before the photograph of three young African-Americans holding hands while being fire-hosed at Birmingham that same year, and weep. As Dr. Martin Luther King, Jr. said from Wrigley Field 56 years ago:  ““Birmingham or Los Angeles, the cry is always the same. We want to be free.”